For Izzat Salah, 82 years old, eviction means losing the house in which he lived for over 50 years, and where he raised his 10 children. 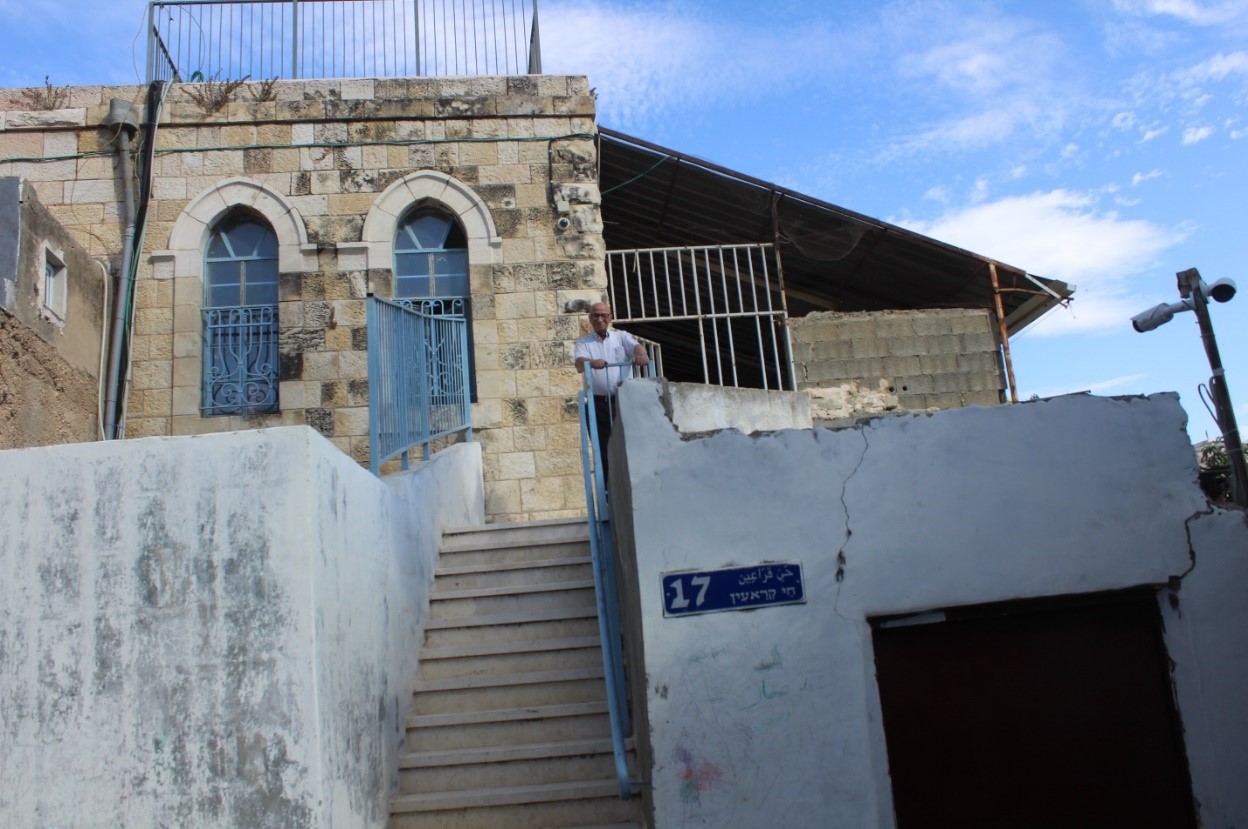 On 14 September 2020, after five years of legal action, the Israeli Supreme Court issued a final decision to evict Mr. Salah and his family from the home they rented in the Wadi Hilweh area of the Silwan neighbourhood in East Jerusalem. According to the ruling, the house had to be vacated by 5 November 2020. Following the ruling, Mr. Salah’s daughter-in-law, the widow of one of his sons, and her six children, left the home.  Mr. Salah remained in the house until a few days before the eviction date, when he also left.

The eviction resulted in him leaving the neighbourhood where he grew up, and losing his daily contact with family and friends. “You can see how crowded Silwan is, because it’s impossible for us to get building permits. And even if I found a place here, how could I afford the rent? Besides, with so much settler activity in Silwan, people are suspicious about renting out their homes.”

Forced evictions have grave physical, social, economic and emotional impact on the Palestinian families concerned. In addition to depriving the family of a home – its main asset and source of physical and economic security – evictions frequently result in disruption in livelihoods and increased poverty. OCHA estimates that at least 970 Palestinians are at-risk of forced eviction in East Jerusalem, due to cases brought before Israeli courts, primarily by Israeli settler groups.

This is the result of the application of Israeli legislation in an occupied territory, including specific laws that facilitate the takeover of properties for the establishment of Israeli settlements. As stated in a recent report by the UN Secretary-General, the Israeli authorities “must immediately and completely cease all settlement activities in the oPt, including East Jerusalem”, review the application of certain Israeli laws “that have been used as a basis to evict Palestinians from their properties in East Jerusalem”, and “halt demolitions and forced evictions”.[1] 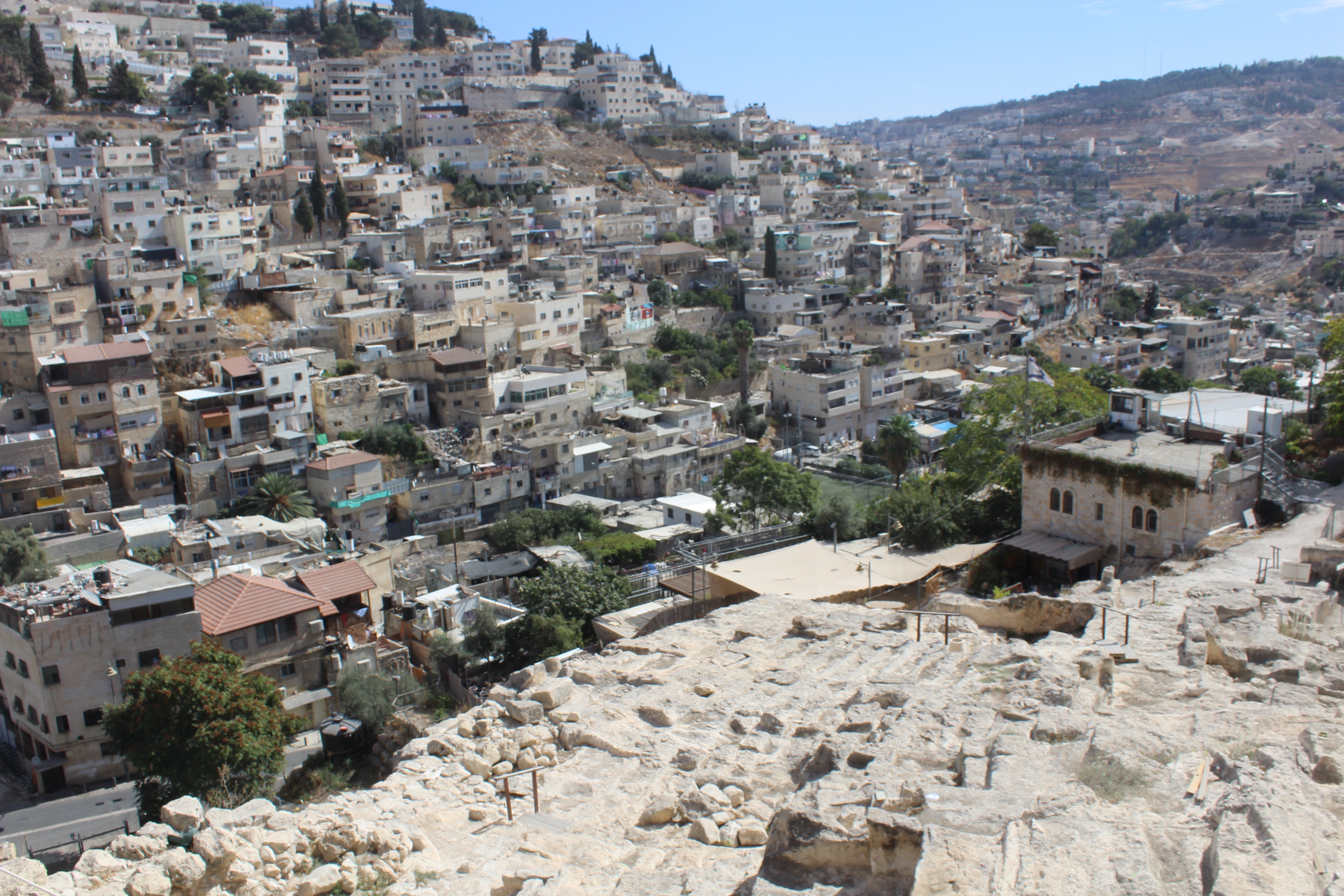 The decision to evict the Salah family was issued in favour of Elad, an Israeli settler organization, also known as the Ir David Foundation. Enabled by the Israeli authorities, Elad has used the Israeli legal system to take control of a number of Palestinian properties in Silwan, and establish compounds there. As with the Salah family, the majority of cases have been challenged unsuccessfully in Israeli courts.[2]

Silwan has been the target of repeated settlement activity by the Israeli government and religious settler organizations, due to its strategic location and the claims made regarding its connections to King David.[3]

In addition to taking over buildings, settlement activities in the neighbourhood also include archaeological excavations and the operation of the City of David National Park and Visitors Centre. The State of Israel has delegated the administration of these public sites to Elad.

These developments are part of wider settlement expansion within Palestinian residential areas in the so-called ‘Holy Basin’ area of East Jerusalem. In addition to Silwan, this includes the Muslim and Christian quarters of the Old City, Sheikh Jarrah, At Tur (Mount of Olives), Wadi Joz, and Ras al-Amud. Settlers reside in houses which have been expropriated by means of the Absentee Property Law; on the basis of alleged former Jewish ownership; in buildings and land purchased from Palestinian owners; and in residences custom-built and financed by settler organizations.

The impact of settlement activity in Palestinian areas such as Silwan includes restrictions on public space, residential growth and freedom of movement, along with increased friction and violence. In the most severe cases – Silwan, the Old City, and Sheikh Jarrah – settler expropriation has resulted in the loss of property and the eviction of long-term Palestinian residents.[4]

The unilateral annexation of East Jerusalem to Israel following the 1967 war is not recognized by the international community. The UN has resolved that ‘’it will not recognize any changes to the 4 June 1967 lines, including with regard to Jerusalem, other than those agreed by the parties through negotiations.” Settlements are also illegal under international law.

The building that the Salah family rents consists of two parts. Mr. Salah moved into the first part in 1968, renting it from a member of a large local family, and became protected tenants under the Tenant Protection Law. As his family grew, Mr. Salah moved into the second part of the building in 1993, also renting from the same landowner, but was not a protected tenant in this case.

In 2014, the landlord, who had emigrated, offered Mr. Salah $120,000 to vacate the property. This roused his suspicions, as the sum was worth more than the value of the house, and because Elad were known to be secretly buying up Palestinian properties in the neighbourhood. When the family refused to leave, the landlord initiated legal proceedings. In 2017, the family was evicted from that part of the property where they did not have protected tenancy status.

Following that court case, the landlord informed them that all of the building had been sold to Elad, including the part the family was still living in as protected tenants. Elad, in turn, started legal proceeding to evict the family from the rest of the house. Elad also began renovating the part of the building from which the Salah family had been evicted, posting a guard at the entrance and trying to restrict the family from using the common courtyard the two parts of the building share. The Salah family went to court and won an injunction which halted the renovation and the other measures.

In December 2019, the Jerusalem Magistrate’s Court ruled that, although the family was considered a protected tenant in that part of the property they still rented, Elad had the right to request the eviction. This is in accordance with a clause in the Tenant Protection Law, which permits the eviction of a protected tenant, if the owner can prove they need the property, although they are required to find the tenant alternative housing or provide compensation.[5] In the Salah family’s case, Elad testified that there is a Jewish family waiting to enter the property. On this basis, the Magistrate’s Court ruled that Mr. Salah must vacate the property and that Elad association would offer NIS 360,000 in compensation. Mr. Salah then appealed to the Supreme Court, but the ruling of 14 September exhausted all legal action.

Regarding the compensation, Mr. Salah explains: “If I wanted to, I could have settled for the money years ago, without going through all the emotion and expenses involved in the court cases. Besides, I owe arrears in property tax and other expenses which will be deducted from the compensation. No money compensates you from losing your home and your neighbourhood.” 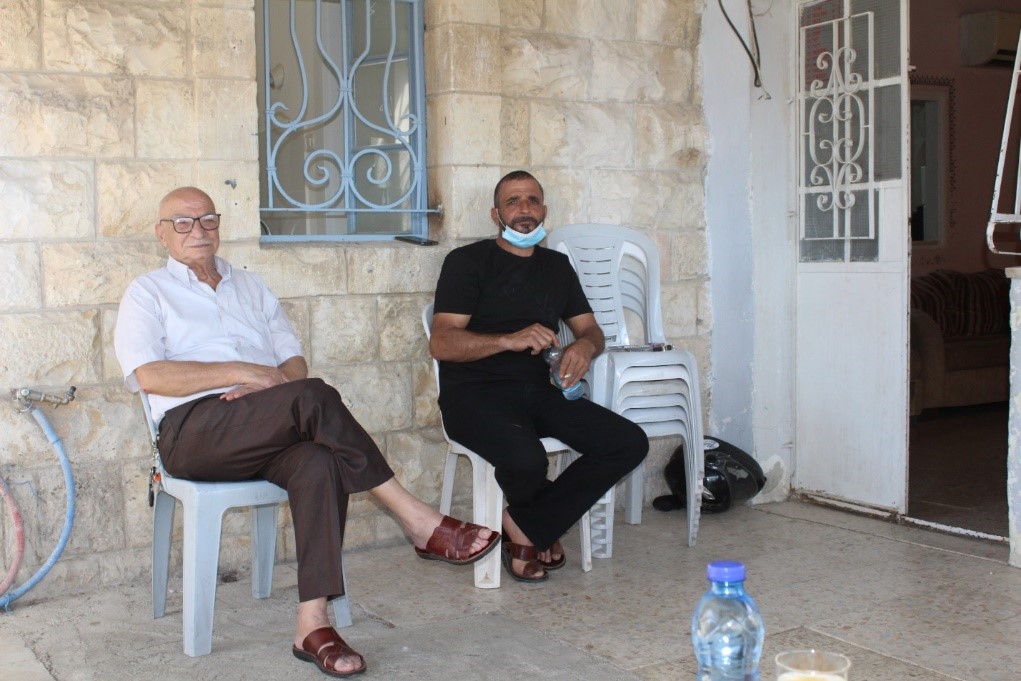 On 4 September, the Jerusalem Magistrate’s Court issued an eviction order against the Dajani, Daoudi and Hammad families in Sheikh Jarrah. The Court also ordered the families to pay NIS 30,000 in legal fees and expenses. The family has until 1 August 2021 to comply with the order and were given 45 days to appeal the order.

On 8 October, the Jerusalem Magistrate Court issued a decision ordering the eviction of another four extended families in Sheikh Jarrah. According to the ruling, the Skafi, Al Kurd and Abu Hasaneh families have to vacate their properties within 30 days and the Jaouni family has until 1 January 2021 to comply. The Court also ordered each of the families to pay NIS 70,000 to the settler organization, Nahlat Shimon International, for the legal expenses incurred.

In the two cases above, the families have appealed the decisions, which will delay the evictions.

In another eviction case in Sheikh Jarrah, on 3 November, the Jerusalem Magistrate’s Court dismissed a request for an interim injunction on an eviction order of the Sabbagh family, and ordered the family to vacate their property no later than 24 November 2020. The Court also ordered the families to pay NIS 7,500 to Nahlat Shimon International for the legal expenses incurred. The family comprises 32 people, including five children. Although the family’s lawyers managed to secure another interim injunction, this is not expected to delay the eviction for long.

In Silwan, on 7 September, the Jerusalem Magistrate’s Court ordered the eviction of four families residing in the al Rajabi house in the Batan Al-Hawa neighbourhood. The families have until 1 April 2021 to leave the property.

On 14 September, the Salah family was ordered to evict their home Wadi Hilweh area of Silwan by 5 November 2020, (see article above).

Also in Silwan, in two separate cases on 18 and 23 November, the Jerusalem District Court rejected appeals against the eviction of the Odeh, Shweiki, and Dweik families from the Batan Al-Hawa neighbourhood. The families were ordered to pay NIS 20,000 to the settler organization, Ateret Cohanim, for the legal expenses incurred. The lawyers representing these cases plan to file separate appeals to the Supreme Court.

In 2016, UNOCHA conducted a mapping exercise which showed that 818 Palestinians were at risk of displacement due to eviction cases filed against them in East Jerusalem. A follow-up survey in 2020 reveals that at least 218 Palestinian households have eviction cases filed against them, the majority initiated by settler organizations, placing 970 people, including 424 children, at risk of displacement. The majority of new cases were identified in the Batn Al Hawa area of Silwan, which remains the community with the highest number of people at risk of displacement, due to ongoing eviction cases. Between 2017 and 2020, around 15 households, comprising 62 Palestinians, were evicted from their homes in the Old City, Silwan and Sheikh Jarrah neighbourhoods of East Jerusalem. 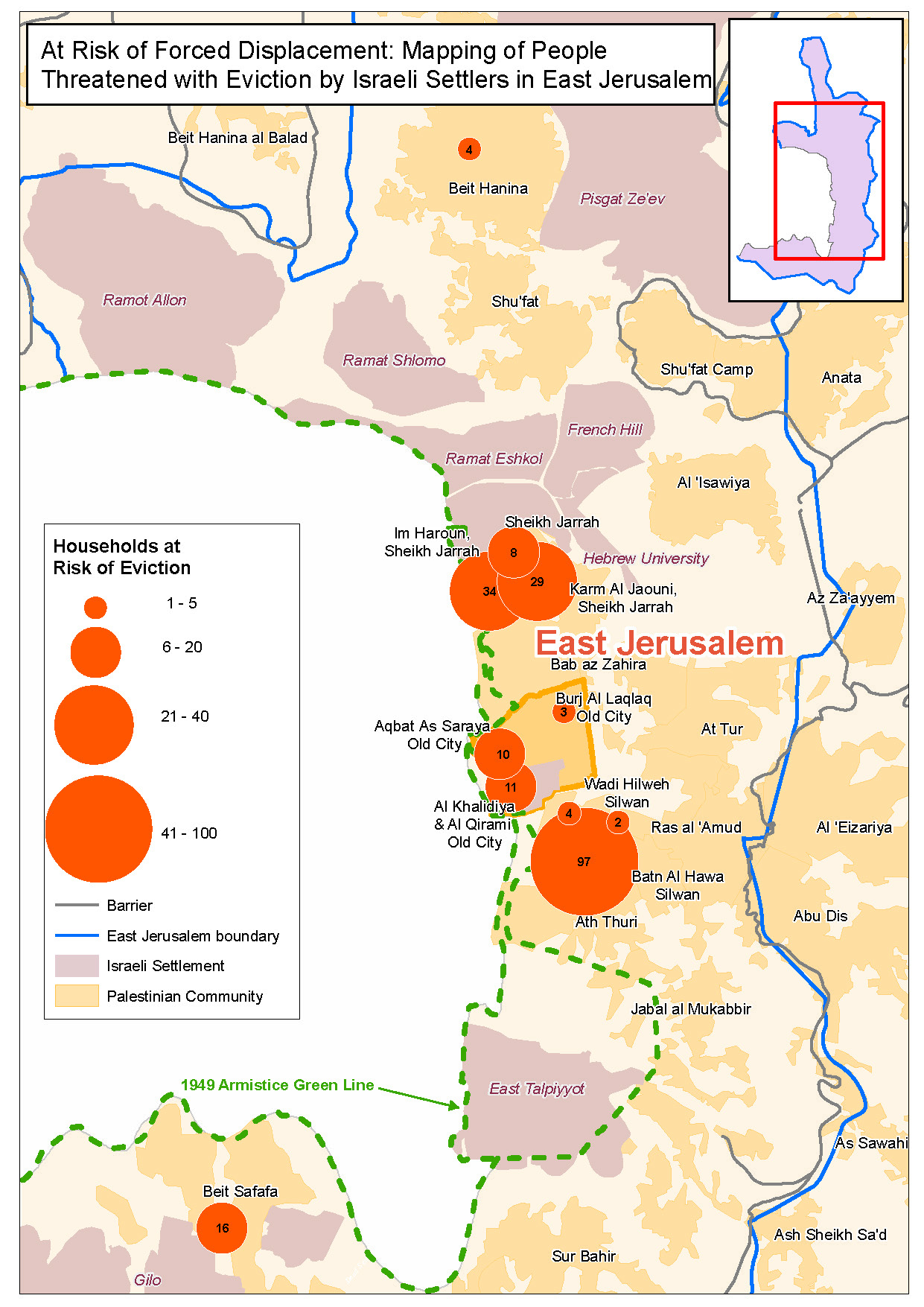 [2] In the most recent case in Silwan prior to the Salah family, on 10 July 2019, the Israeli authorities evicted Ilham Hussein Siyam and her four adult children from their home in Wadi al Hilweh, ending a 25-year-long legal battle. See: https://www.ochaopt.org/content/palestinian-family-evicted-silwan-neighbourhood-east-jerusalem

[3] In Silwan, settler activity is also undertaken by Ateret Cohanim, which also spearheads the takeover of Palestinian property in the Muslim Quarter of the Old City. See: https://www.ochaopt.org/content/rising-tensions-following-settlement-expansion-palestinian-neighbourhood-east-jerusalem