It is estimated that 199 Palestinian households currently have eviction cases filed against them, the majority initiated by settler organizations, placing 877 people, including 391 children, at risk of displacement.[1] Evictions can have a grave physical, social, economic and emotional impact on the affected families.

On 10 July, the Israeli authorities evicted Ilham Hussein Siyam and her four adult children from their home in the Wadi al Hilweh neighbourhood of Silwan in East Jerusalem, ending a 25-year-long legal battle. The eviction, in which settlers took part by removing the family’s furniture[2], followed the Jerusalem District Court ruling of 12 June 2019 in favour of Elad settler organization’s ownership of the majority of the Siyam family home, including the vacated apartment, a store and a nearby courtyard. The family’s appeal against the eviction was immediately rejected at the Israeli High Court on 8 July 2019.

Settlers have already moved into the evicted apartment, while Ilham’s family have moved in with other family members to live in what remains of the family property. According to the family, they now need to pay NIS 72,000 in legal-related costs to the Elad organization and NIS 50,000 to the District Court. In addition, according to Ilham Siyam, Elad organization has now demanded that the family pay them NIS 400,000 in retroactive rent, against which the family submitted an objection and await a final ruling. During the eviction, Jawad Siyam, who is one of the heirs and a Silwan community leader, was arrested and later banned from entering Silwan, including his home, for three days. 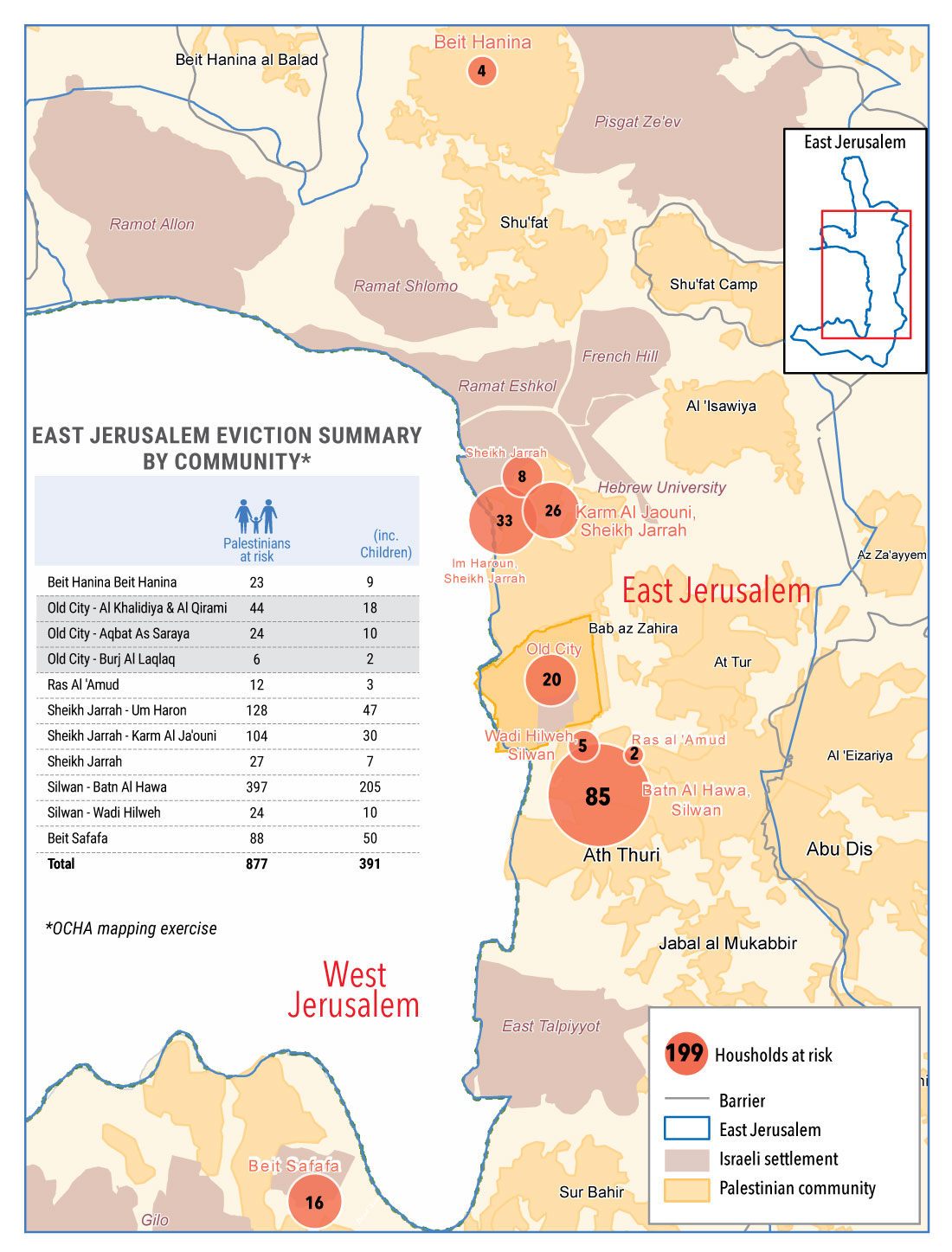 In recent decades, Israeli settler organizations, with the support of the Israeli authorities, have taken control of properties within Palestinian neighbourhoods in East Jerusalem and established settlement compounds. These settlements are concentrated in the Muslim and Christian quarters of the Old City, Silwan, Sheikh Jarrah, At-Tur (Mount of Olives), Wadi Joz, Ras al-Amud and Jabal Mukabbir.[3] Settler activity in these areas has resulted  in the forcible eviction and displacement of Palestinian residents, with negative humanitarian impact. Most of these cases were challenged unsuccessfully in Israeli courts.

Palestinian houses have been transferred to settler organizations by various means. In some cases, settlers have pursued court cases to evict the Palestinian residents, on the grounds that the land or buildings were owned by Jewish individuals or associations in East Jerusalem prior to 1948.[4] 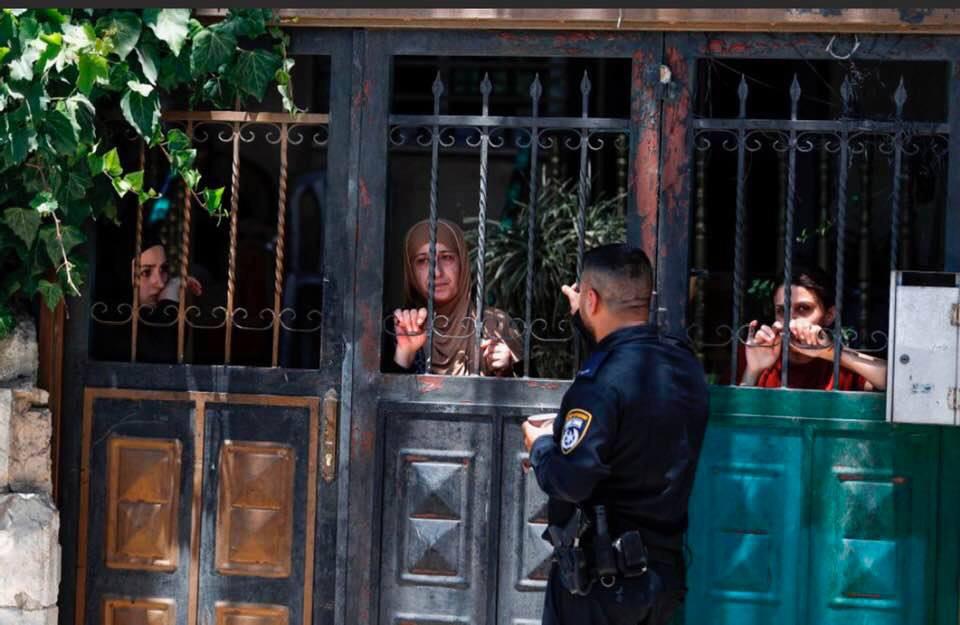 In other cases, the Absentee Property Law of 1950 is applied: this law, which was devised to formalize the expropriation of the land and property of Palestinians who were expelled or fled during the 1948 Arab-Israeli war, has been applied, albeit inconsistently, to East Jerusalem since 1967.[5] In the case of the Siyam family, the deceased owner, Ilham’s grandmother, bequeathed the property to eight family members, and the Custodian of Absentee Property took control of two of these shares on the basis that the two heirs live abroad, and are ‘absentees’. Ilham is the daughter of one of these ‘absentee’ heirs.   In 2018, the Custodian auctioned its quarter share of the home and Elad won the bid for over NIS 2 million.

Settler organizations have also had some success in purchasing land and property directly from the Palestinian owners, due to the economically depressed situation in many of the affected neighbourhoods. In the Siyam case, Elad manged to buy the shares of property from four of the heirs: together with their purchase from the Custodian, they have succeeded in having a majority share in the property and the District Court ruled in their favour.

Evictions have grave physical, social, economic and emotional impact on the Palestinian families concerned. In addition to depriving the family of a home – its main asset and source of physical and economic security – evictions frequently result in disruption in livelihoods, increased poverty and a reduced standard of living.[6] The high legal fees families incur when defending a case in court further strains already meagre financial resources. The impact on children can be particularly devastating, including post-traumatic stress disorder, depression, anxiety and diminished academic achievement.

The establishment of settlement compounds in the heart of Palestinian areas also generates a coercive environment on the daily lives of Palestinians residing in the vicinity of these compounds, and creates pressure on them to leave. The main elements of this environment include increased friction; restrictions on movement and access, particularly during Jewish holidays; and a reduction on privacy due to the presence of private security guards and accompanying surveillance cameras.[7]

The unilateral annexation of East Jerusalem to Israel following the 1967 war is not recognized by the international community. The UN has resolved that ‘’it will not recognize any changes to the 4 June 1967 lines, including with regard to Jerusalem, other than those agreed by the parties through negotiations.” Settlements are also illegal under international law.

[3]  On 22 January 2019, the UN Humanitarian Coordinator for the occupied Palestinian territory, Jamie McGoldrick, together with other UN officials and NGO partners, visited the Sabbagh family in Sheikh Jarrah and called for a halt to the eviction of the family, which has been initiated by a settler organization

[4] Under Israeli law, Israelis may pursue claims to land and property allegedly owned by Jews in East Jerusalem prior to the establishment of the State of Israel. However, it denies Palestinians the right to reclaim land and property in what is now Israel.

[5] In 1967, Israeli Attorney General Meir Shamgar decided against applying the law in East Jerusalem, although it was used sporadically in the 1980s to expropriate properties in Silwan and the Muslim Quarter of the Old City from Palestinian owners. The rules were subsequently relaxed, see Nir Hasson, “Israel’s AG: Absentee Properties in East Jerusalem Can Be Confiscated,” 5 June 2013.

[7] For an analysis of the impact of settler takeover on the Batn al Hawa area of Silwan, see Humanitarian Impact of settlements in Palestinian Neighbourhoods of East Jerusalem: the Coercive Environment, OCHA Humanitarian Bulletin, June 2018.