The Gaza Strip witnessed the deadliest and most destructive escalation in hostilities since the start of the Israeli occupation. Around 13 per cent of the housing stock in Gaza was destroyed or damaged and over 100,000 became homeless. Large number of casualties in West Bank clashes prompted concerns of excessive use of force by Israeli forces. Extensive areas in Bethlehem declared “state land” and expected to be allocated for settlement development. 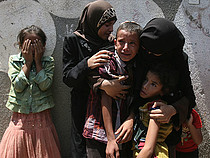 Words cannot express the enormity of the loss and human suffering sustained by the people of the Gaza Strip during the seven weeks of hostilities in July and August. It was the deadliest and most destructive escalation since the start of the Israeli occupation in 1967. At least 1,486 Palestinian civilians, including more than 500 children, were killed and around 11,000 people were injured, up to ten per cent of them with long-term or permanent impairments. Some half a million people were displaced at the height of hostilities, and approximately 108,000 were made homeless. Around 13 per cent of the housing stock was damaged, including up to 20,000 homes totally destroyed or rendered uninhabitable. The extensive damage to public infrastructure further undermined the already precarious access to basic services that prevailed prior to the conflict, including electricity, water and sanitation, health, and education.

Sharp increase in clashes and casualties across the West Bank

The period between June and August 2014 was marked by heightened tensions across the West Bank, in which clashes between Palestinians and Israeli forces intensified and led to casualties and many arrests of Palestinians (see section below on Arrests). 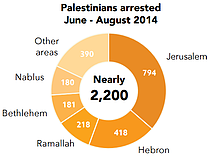 On 12 June, three Israeli youths were abducted and later killed on their way home from a religious school (yeshiva) in two Israeli settlements in the southern West Bank. The Israeli authorities held Hamas responsible and identified three Hamas activists as the perpetrators; one of them was subsequently arrested. 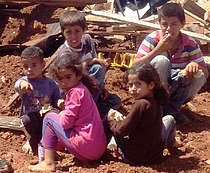 During the reporting period, the Israeli authorities demolished a total of 82 Palestinian-owned structures across the West Bank, displacing nearly 200 people, 60 per cent of them children, and otherwise negatively affecting another 300. Although demolitions were fewer in number than during the beginning of the year and the equivalent period in 2013, the resumption of punitive and ‘military’ demolitions, and the advancement of a plan to ‘relocate’ entire Bedouin communities in Area C, were worrying developments.

On 25 August, the Israeli Civil Administration (ICA) announced the declaration of 3,799 dunums of land (1 dunum = 1000 m2) in Bethlehem governorate as ‘state land’. This follows a case earlier this year, on 6 April 2014, in which the ICA had declared 1,000 dunums of land in Area C, also in Bethlehem governorate, to be ‘state land’. According to the Israeli media, this measure was approved by the Israeli cabinet in response to the kidnapping and killing of three Israeli youths in June.

The period between 7 July and 26 August 2014 witnessed the deadliest escalation in hostilities to affect the population of Gaza since the beginning of the Israeli occupation in 1967. The cumulative death toll among Palestinians was at least 2,189 according to preliminary data collected by the Protection Cluster from various sources.

The hostilities that took place between 7 July and 26 August 2014 can be broken down into three phases: a period of air, land and naval strikes between 7 and 17 July; a ground operation by Israeli forces entering the Gaza Strip from 18 July to 5 August, accompanied by continuing airstrikes; and a period of alternating ceasefires and military strikes until an indefinite ceasefire came into effect on 26 August.

Half a million Palestinians internally displaced as a result of hostilities

During the 50 days of hostilities, thousands of Palestinians fled their homes to take refuge with host families, in UNRWA schools, and in government and informal shelters. While the numbers fluctuated during the conflict, at various points approximately half a million Palestinians were internally displaced, constituting 28 per cent of the population. The largest exodus occurred from areas within three kilometres of the Gaza perimeter fence with Israel, declared by Israel as a buffer zone.

The extensive Israeli aerial bombardment, naval shelling and artillery fire had devastating results on public infrastructure, including water, sanitation and energy. Although infrastructure had been repeatedly hit during previous escalations, the damage on this occasion was unprecedented. Already extremely fragile prior to the hostilities, the damage to the water and energy infrastructure further undermined access to basic services and sources of livelihood.

During the 50-day Gaza emergency, 75 health structures (17 hospitals and 58 clinics) were damaged to varying degrees and 44 facilities were closed at one time due to damage or for security reasons, limiting access to health services to almost half of the population. Nevertheless, following the ceasefire, only four of the 32 hospitals monitored by the Ministry of Health (MoH) and WHO remain closed.