Further deterioration in access to basic services and livelihoods

The extensive Israeli aerial bombardment, naval shelling and artillery fire had devastating results on public infrastructure, including water, sanitation and energy. Although infrastructure had been repeatedly hit during previous escalations, the damage on this occasion was unprecedented. Already extremely fragile prior to the hostilities, the damage to the water and energy infrastructure further undermined access to basic services and sources of livelihood.

Gaza’s sole power plant (GPP), which supplied 30 per cent of the electricity available in Gaza, was hit several times by Israeli fire. The most serious incident was an airstrike on 29 July, forcing the GPP to be shut down; it remains closed as of late September 2014 despite significant progress in repairs. Prior to this, the ground incursion and related shelling, plus Palestinian rocket firing, damaged all ten feeder lines from Israel, from which most electricity in the Gaza Strip is purchased, as well as large sections of the internal distribution network. While the feeder lines and some parts of the network were repaired to allow the provision of electricity for up to six hours a day, the worst affected areas, such as Beit Hanoun, eastern Gaza city (Ash Shujai’yeh), Khuza’a and eastern Rafah, remain almost completely without a supply.[1]

Once repairs are complete and operations resume, the GPP is not expected to function at full capacity due to insufficient funding to purchase the required fuel. Until mid-2013, the main source of fuel was the tunnels with Egypt, smuggling in low-cost Egyptian subsidized fuel. The closure of the tunnels by the Egyptian authorities forced the GPP to shift to more expensive Israeli fuel and rely on external donations. This resulted in scheduled power outages of 12 hours per day, or longer on some occasions when the plant was forced to shut down.

The generating capacity and reliability of the GPP has been significantly impaired over the past eight years by additional factors. These include the destruction of six transformers by an Israeli airstrike in 2006; restrictions on the import of spare parts, equipment and fuel under the Israeli blockade; and the dispute between the Palestinian Authority (PA) and the de facto authorities in Gaza over the funding of GPP operations.[2] 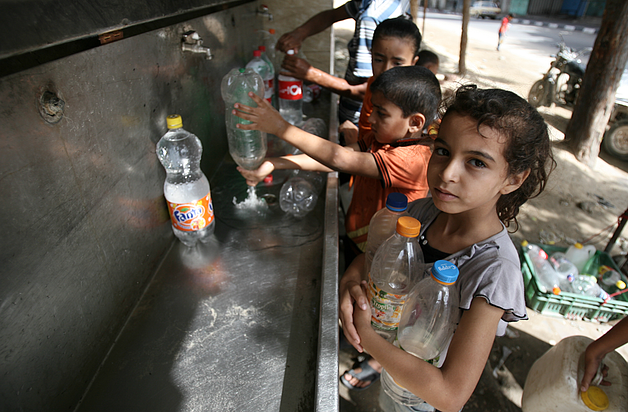 According to an initial Damage Assessment Report (DAR) by the Coastal Municipalities Water Utility (CMWU), 12 per cent of Gaza’s wells have been destroyed or damaged during Israeli bombardments, particularly in Gaza City, Beit Hanoun and Deir Al Balah municipalities. Additionally, over 33,000 metres of water and wastewater networks were recorded as damaged: around half located in Khan Yunis, followed by Gaza Municipality. CMWU has been repairing damage and, as of early September 2014, managed to address 80 per cent of the priority repairs. Despite this, current estimates are that 20 to 30 per cent of households, or 450,000 people, remain unable to access municipal water due to damage and/or low pressure. Additionally, many of these repairs are temporary and will require longer-term repairs after emergency works are completed.

Water provision has been severely undermined by the increased power cuts that reduce network pressure. Additionally, households without electricity and/or supplemental pumps cannot fill rooftop storage tanks when water is available. Although municipalities and CMWU are making efforts to truck domestic water to neighbourhoods that remain unconnected, they face a shortage of available trucks.

Water and sanitation services in the Gaza Strip were already at a critical level prior to the recent war. The Gaza Strip relies on the underlying Coastal Aquifer as its only water source. Systematic over-extraction during recent decades has resulted in the intrusion of seawater and the emergence of the underlying saline water. As a result, households rely on the purchase of desalinated water from private vendors and tankers for drinking and cooking purposes.[3]

The operation of many desalination plants was disrupted or shut down during hostilities due to the damages sustained (the scope is still unknown), as well as due to electricity/fuel shortages. It is estimated that plants that resumed operations face increased operational costs from greater reliance on generators and the cost of scarce fuel supplies. Demand also increased for desalinated water as a result of shortages in municipal supplies and use of desalinated water for domestic uses. The rise in prices reduces economic access by already vulnerable families and exacerbates the problems of access to drinking water. It is vital to stabilize the prices of desalinated water and enhance the ability of families to purchase this water.

The damage sustained by the electricity and water infrastructure has had a pervasive impact on living conditions. Water scarcity has directly impacted on hygiene and raises public health concerns, particularly in hospitals and among IDPs. According to the MIRA report: “Reduced access to water, limited privacy, and cramped living conditions have led to increases in cases of diarrhea, lice, and skin rashes, most acutely in temporary school shelters. This has had a negative impact on the privacy and dignity of women and girls at IDP and host families in particular.”

The lack of electricity and limited sanitation in health facilities, including hospitals and primary health centres, has been detrimental to the continuity and quality of services during hostilities. Although the major hospitals have more stable direct lines, during power cuts hospitals reserve power for essential medical services by operating standby electric generators. The prolonged power cuts have strained back-up power sources, hindering the operation of medical equipment and resulting in interrupted or postponed medical treatment.

Emergency fuel distributions to ensure critical water and sanitation, health and municipal services have been in place since December 2013, but funding for emergency deliveries is running out faster than anticipated due to the increased needs.

Food and agricultural sectors also suffer from the lack of electricity as bakeries and food producers struggle to meet demand. Lack of refrigeration causes significant damage to crops and increased production costs. Interruptions to crop irrigation delays flowering and prevents fruit from ripening, resulting in a decreased ratio of yield to input.

“Our life is all running and flight”: a case study

* This section was contributed by the Emergency Water, Sanitation and Hygiene Group (EWASH), which coordinates the initiatives of local and international NGOs and UN agencies.

Um ‘Ahed Al Ajla sought shelter with her extended family on the top floor of a construction site. Before the start of the hostilities, she and her husband owned a five-storey building where she lived with her extended family. When the area was bombed, all 35 family members had to flee without being able to take any of their personal belongings. The neighbourhood they settled in was also hit in Israeli attacks and her family had to take refuge again in another area, before having to relocate for a third time after their shelter was hit. “Our life is all running and flight,” said Um ‘Ahed Al Ajla.

Um ‘Ahed Al Ajla and her family currently live in a building that lacks the most basic facilities or sanitation and hygiene facilities, relying on makeshift washrooms. The female members of the family lack privacy.

Drinking water (desalinated) is not available in the building and has to be bought from private vendors at distribution points in the neighbourhood. Um ‘Ahed Al Ajla’s family has no choice but to make daily trips to fetch fresh water from 300 metres away in jerry cans. “Sometimes we stay the whole day long without a drop to drink. Water is the basis for everything and we don’t have it,” says Um ‘Ahed Al Ajla.

For most of their domestic needs such as cooking, cleaning and bathing, the family uses saline water from the municipality, which is available sporadically and only for a few hours per day. The dire sanitation and hygiene conditions and the lack of clean water have caused several health problems and the youngest family members suffer from skin problems such as rashes and allergies.

Um ‘Ahed Al Ajla is very worried about her family’s uncertain future. With the winter months approaching, the family needs a decent home with guaranteed basic services like water and electricity.