Around 2,200 Palestinians detained between June and August, many under administrative detention orders

On 12 June, three Israeli youths were abducted and later killed on their way home from a religious school (yeshiva) in two Israeli settlements in the southern West Bank. The Israeli authorities held Hamas responsible and identified three Hamas activists as the perpetrators; one of them was subsequently arrested.

An extensive military campaign conducted throughout the West Bank following this incident included search and arrest operations, broad movement and access restrictions and raids on welfare organizations and universities.10 These last two measures were largely lifted following the discovery of the bodies of the Israeli youths on 30 June, but intense search operations continued throughout the reporting period to capture the two suspected perpetrators, and also in response to tensions and clashes following the abduction and killing of a Palestinian boy in East Jerusalem and protests against the Israeli offensive in the Gaza Strip.

The nature and scope of measures implemented by the Israeli authorities have raised concerns about collective punishment: Article 33 of the Fourth Geneva Convention establishes that civilians cannot be punished for an offence they have not personally committed and that all measures of intimidation against civilians are prohibited.[1]

In the early morning on September 23, in Hebron city, Israeli forces killed the two Palestinian suspects of killing three Israeli youths in June 2014. The incident involved exchange of fire between the Israeli forces and the two men, as well as the use of explosives by the former, which set the building where the two were hiding on fire. Extensive damage to property in surrounding houses and shops was reported. 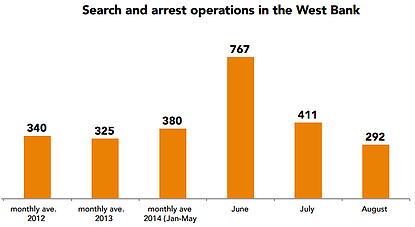 The intense military operations launched on 13 June focused initially on the city of Hebron, but later expanded to refugee camps, villages and cities across the West Bank. Between June and August 2014, Israeli forces carried out a total of 1,470 search and arrest operations and detained around 2,200 Palestinians.[2] The number of people detained in June (around 770) was almost double the monthly average of the previous five months and is the highest such figure recorded since OCHA established its Protection of Civilians database in 2005. Many of these operations triggered clashes with Israeli forces and resulted in a record number of casualties (see Casualties section above).

Many of the individuals detained, or whose houses were raided, were alleged Hamas and Islamic Jihad members. Dozens of them had previously been released in the 2011 prisoner exchange (the Shalit deal), and some were members of the Palestinian Legislative Council. While a full breakdown of the status of the detainees over the reporting period is currently unavailable, hundreds were held under administrative detention (i.e. imprisonment without charge or trial); according to Israeli official figures, by the end of August there were 473 administrative detainees, up from less than 200 at the end of May.[3]

The largest number of detentions was recorded in the Jerusalem governorate. According to Israeli police records,[4] around 200 Palestinian children were detained in East Jerusalem during this period, which is equivalent to the total number of children detained in each of 2012 and 2013 as recorded by UNOCHA.

The June operations primarily involved the search of thousands of Palestinian homes and many residents reported damage and theft. Hebron governorate was most affected: approximately 1,400 houses were raided, including at least 280 cases of reported damage to furniture and other belongings. At least 47 houses were occupied by Israeli forces for periods ranging from several hours to a few days.

During these military operations, several welfare organizations, allegedly linked to Hamas, were raided, computers and other equipment were confiscated, and some were shut down under military orders.

Most affected was Hebron’s Islamic Charitable Organization, which employs 680 staff and provides assistance to some 6,000 beneficiaries in the form of education, food, shelter and social safety nets for poor families. On 20 June, Israeli forces raided the organizations headquarters located in the Palestinian-controlled area of Hebron city (H1). They confiscated equipment, sealed the main door and affixed a closure order in force until the end of 2014. Three of the organization’s branches in Hebron governorate (Ash Shyyoukh, Bani Naim and Beit Ula) were also raided.

On 2 July, Israeli forces raided the Ar Rayan dairy factory also owned by the organization, in an Area C part of Hebron city, and confiscated all its equipment worth more than US$100,000. Two month later, the Israeli authorities demolished the factory on the grounds that it had been built without a permit and was subject to a pending demolition order from 2002 (See section below on Demolitions and Displacement).

While overall most of the organization’s educational and charity activities have continued, the closure of the headquarters and the requisition of computers has disrupted activities and hindered access to vital data.

Broad restrictions on movement imposed by Israel disrupted access by Palestinians to services, markets and workplaces, and resulted in significant economic losses. The bulk of these restrictions were implemented across Hebron governorate, focusing on Hebron city, and access was disrupted for over 680,000 residents, or around 25 per cent of the West Bank population.[5]

Three of the main entrances to Hebron city were closed to vehicular traffic, while access through the remaining three routes (Halhul, Nabi Yunis and Al Fahs) was subject to new checkpoints where Israeli soldiers check documentation and search vehicles, resulting in prolonged delays. Additional new checkpoints sprang up on routes in the vicinity of Hebron city, including the main entrances to Halhul, Dura and Idhna towns, and Al Fawwar refugee camp, where vehicles with Palestinian number plates were stopped for inspection. These new checkpoints were gradually lifted in the period after the discovery of the bodies of the three Israeli teens.

In addition, male residents of Hebron governorate aged between 20 and 50 years were subjected to restrictions preventing them from crossing the Wadi An Nar checkpoint, which controls the single route available to most Palestinians between the central and southern West Bank, and preventing travel to Jordan via the Allenby Bridge.

According to the Palestinian District Coordination Liaison Office (DCL), during the reporting period, around 23,000 permits for workers and 3,700 permits for businessmen to enter East Jerusalem and Israel were revoked, resulting in daily economic losses estimated at NIS12 million (approximately US$3.3 million). Other losses were incurred by blocking the export of products manufactured in Hebron to Israel.

Responding to the emerging psycho-social impact

* This section was contributed by YMCA and UNICEF

Search and arrest operations, especially at night, can have a traumatic effect on family members, and particularly on children detained during such operations or exposed to the detention of others. These experiences have a pervasive impact on children’s self-confidence, family relationships, and future education and work opportunities. Many children suffer from increased levels of fear, insecurity, frustration, lethargy, depression and anger, sometimes developing hostile behaviour.

As part of the child protection response, 11 YMCA psychosocial (PSS) teams across the West Bank, composed of 11 counsellors and 22 volunteers, have been providing swift remedial assistance to children and their families. Between June and August, they conducted 518 interventions, providing support to 2,695 children, a dramatic increase over previous months. The majority of interventions were to support children and families affected by house raids (218), arrest and detention (160) and house demolitions (36).

The teams focused on care givers, providing them with techniques to protect and support children in challenging and traumatizing situations. They also conducted rapid needs assessments for referral to other actors in the community to ensure adequate support in terms of livelihoods, shelter and education. Children participated in therapy sessions and recreational activities to reduce feelings of stress and anxiety, and, where needed, received immediate counselling.

* Information provided by the Education Cluster and its partners

The Israeli military operations occurred during the period of the Tawjihi exams (the final high school exams for students in the oPt) and caused many disruptions to exam schedule. Clashes, restrictions on movement, checkpoints and the military occupation of homes and schools had a detrimental effect on students, both physically and psychologically, across the oPt, most notably in Hebron. Five schools within or next to Taffuh village in Hebron were reportedly occupied by Israeli forces. One of them, the Aesh Al Sayed Al Herbawi school for boys was occupied for four days (14-17 June) with minor damage to school facilities, as well as signs of urination in the kitchen and classrooms. The other four schools were occupied for several hours, and reported little or no damage. Several other schools were reportedly used as interrogation centers, including the Al Madama school (Nablus) on June 22.

[1] Collective penalties refer not only to those imposed under penal law, but measures of any kind inflicted on persons or entire groups of persons for acts that these persons have not committed. For further details on the scope of this provision, see International Committee of the Red Cross, Commentary to the IV Geneva Convention relative to the protection of civilian persons in time of war, Geneva, 1994, p. 225

[2] Information collected by OCHA and recorded in its Protection of Civilians database.