Responding to emerging humanitarian needs during the hostilities

The continuous opening of the crossings with Israel facilitated emergency operations

The response of national authorities during the hostilities was severely constrained by the long-standing movement and access restrictions imposed on Gaza, as well as internal Palestinian divisions. The rapidly deteriorating humanitarian situation since July 2013 had depleted people’s coping mechanisms and weakened the preparedness of the authorities to respond to emergencies. Humanitarian actors also noted gaps in preparedness and stock shortages, mainly due to a lack of funding in certain critical sectors and entry challenges for so-called dual use items. 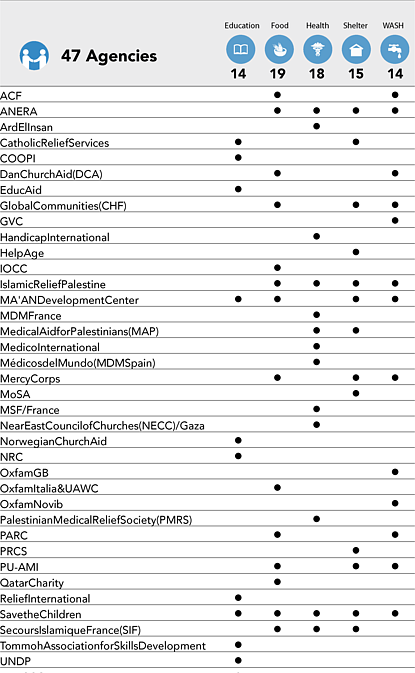 Generally adequate human resource capacity and skills, plus high levels of awareness within communities, have prevented outbreaks of disease and other associated challenges. Other coping mechanisms further mitigated the impact of the crisis, such as strong community solidarity, individual initiatives to provide shelter and food, or informal credit between households. But chronic shortages and crumbling infrastructure across sectors, combined with the scale of the conflict, left actors struggling to respond.

Service providers were unable to reach communities and carry out repairs and maintenance due to the fighting. The Palestinian Civil Defence’s preparedness for search and rescue operations was inadequate because of shortages of cars and equipment, a lack of training, and the insecure environment. Despite weaknesses and damage sustained as a result of the hostilities, the private sector played an important role in meeting specific needs, for example emergency drinking water.

Despite the challenging conditions generated by the hostilities, the Israeli authorities maintained the Kerem Shalom crossing for goods open almost without interruption, alongside continuous engagement and coordination with a range of humanitarian actors. This proved essential in facilitating the entry of humanitarian consignments, including medical supplies, food assistance and non-food items, and the implementation of humanitarian responses. Similarly, the opening of the Erez and Rafah crossings with Israel and Egypt respectively allowed for the evacuation of hundreds of wounded people for treatment outside Gaza. The opening of the former also allowed for the movement of humanitarian staff, despite the restrictions maintained on national staff.

A government Emergency Operations Centre (EOC) for Gaza was established in Ramallah. Relevant line ministries in Gaza itself responded to the best of their capacity, but many faced staffing, salary and running cost issues. Coordination of interventions and financial support remained inconsistent across sectors and in responses and financial monitoring.

An inter-agency EOC, coordinated by OCHA, was also established on the first day of emergency. Comprising representatives from UN agencies, international and national NGOs, ICRC, PRCS and line ministries, its aim was to coordinate and plan responses and assessments, and to identify needs, gaps and priorities.

UN and NGO humanitarian actors in Gaza continued to respond throughout the crisis with existing and increased resources, but were hampered by access limitations. National and local NGOs and CBOs were able, to some extent, to reach affected communities in areas where others did not have access due to the security situation, and numerous partnerships exist or were developed to equip these NGOs and CBOs with resources to enhance their capacity.

Overall, assessments show that most of the affected population received some form of support, although some people could not be reached due to access and security constraints. Many received minimal assistance, sometimes delivered on a one-off basis rather than the continuous intervention required. IDP movement at the end of the hostilities and the identification of their immediate, medium-term and longer-term needs will pose a major challenge.

For a detailed account of response activities carried out during the hostilities see OCHA’s daily Situation Reports and MIRA.