With the onset of winter, an estimated 235,000 people, living in low-lying areas in the Gaza Strip lacking adequate infrastructure, are at risk of flooding, due to the possible overflow of stormwater facilities and sewage pumping stations. Initial reports indicate that approximately 2,000 homes have already been flooded,following heavy rains recorded on 8 and 9 December 2019. As the first article in this month’s Humanitarian Bulletin explains, this is due to the lack of maintenance and repair of these facilities, compounded by a shortage of fuel to operate backup generators. Underfunding drives these deficits: in 2019, less than 74 per cent of the $68 million needed to operate Gaza’s 484 public water and sanitation facilities was secured.

Flooding is just one of the multiple problems confronting Gaza’s Water, Sanitation and Hygiene (WASH) sector, with 1.5 million people, nearly three-quarters of the population, facing daily constraints in accessing such services. The ability of humanitarian agencies to address current gaps has also been undermined by serious funding shortages. Of the $29.5 million requested in the 2019 Humanitarian Response Plan (HRP) for WASH interventions, only 11 per cent was raised, making WASH one of the most poorly-funded sectors. For the 2020 HRP, the WASH Cluster is requesting $29 million, targeting 1.13 million Palestinians in the oPt, the majority, 865,000, in Gaza.

Another longstanding humanitarian concern of particular relevance to Gaza, gender-based violence (GBV), is the subject of another article in this month’s bulletin. Preliminary findings of a survey conducted in the second quarter of 2019, reveal that 29 percent of Palestinian women in the oPt have reported some kind of violence by their husbands at least once during the preceding 12 months. Psychological violence was the most common type of abuse detected, affecting 57 per cent of the women who reported some type of abuse. The prevalence of violence against women by their husbands is significantly higher in Gaza (38 per cent) than in the West Bank (24 per cent), most likely due to the poorer living conditions there, particularly factors such as high unemployment and financial stress; displacement; inadequate housing; and limited sanitation facilities.

The GBV Sub-Cluster, a component of the Protection Cluster, has over 60 members from among the health, justice and social sectors, who provide services for survivors of GBV. Despite these efforts, significant gaps remain, especially the lack of a functioning referral system, along with inadequate programmes to deal with the root causes and prevention of GBV. The 2020 HRP includes eight projects addressing the specific needs of survivors of GBV within the humanitarian context, for which approximately $4 million are requested. 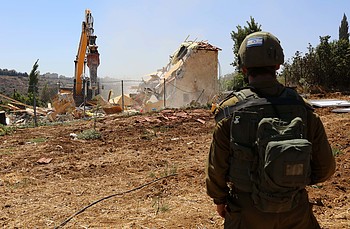 The final article in this month’s bulletin focuses on Al Makhrour, an agricultural area which extends for approximately 3,000 dunums in the western Bethlehem area, whose olive and fruit trees are an important source of livelihood for local farmers. However, due to the restrictive planning regime applied by Israel on Palestinians in Area C, alongside settlement-related activity, farmers are finding it increasingly difficult to maintain their livelihoods.

The plight of Al Makhrour mirrors the general situation in the Bethlehem governorate, where access to natural resources for Palestinians has been increasingly restricted since the occupation began in 1967 due to annexation, land confiscation, the Barrier and the building and expansion of settlements and bypass roads. More than 85 per cent of the governorate is designated as Area C, the vast majority of which is off limits for Palestinian development. Only approximately 13 per cent of the governorate’s land is available for Palestinian use, and much of this is built up already and, overall, fragmented.

"The UN position remains unchanged... Israeli settlement activities are a flagrant violation under international law and a major obstacle to the achievement of the two- State solution and a just, lasting and comprehensive peace"

In November 2019, the Israeli authorities advanced plans for the construction of some 2,600 new housing units in Israeli settlements across Area C, of which 609 are in the large urban settlement of Beitar Illit, in western Bethlehem. In connection to this development, the UN Special Coordinator Nickolay Mladenov stressed in his briefing to the Security Council that “the UN position remains unchanged. As per UNSC Resolution 2334, Israeli settlement activities are a flagrant violation under international law and a major obstacle to the achievement of the two-State solution and a just, lasting and comprehensive peace.”