This article is based on information and analysis by UNFPA

Preliminary findings of a survey carried out by the Palestinian Central Bureau of Statistics (PCBS) in the second quarter of 2019, reveal that 29 per cent of Palestinian women in the oPt, or nearly one in three, has reported psychological, physical, sexual, social or economic violence by their husbands at least once during the preceding 12 months.[1]

Psychological violence is the most common type of abuse detected, affecting 57 per cent of the women who reported some form of violence in the preceding year. The survey also indicates that the overall prevalence of domestic violence against women has declined by some eight percentage points since a similar survey conducted in 2011.

The prevalence of violence against women by their husbands is significantly higher in the Gaza Strip than in the West Bank.

The prevalence of violence against women by their husbands is significantly higher in the Gaza Strip (38 per cent) than in the West Bank (24 per cent). This can be attributed, at least partially, to the relative severity of the humanitarian situation in both regions: existing research suggests that GBV tends to increase among populations affected by severe hardship, including high unemployment and financial stress; displacement; inadequate housing; and limited sanitation facilities.[2] While tradition often stresses the role of men as protectors and providers for their families, humanitarian crises undermine their prospect of fulfilling this role. In such situations, deeply held frustrations andincreased violent behavior may be the result of attempting to reassert control.[3] 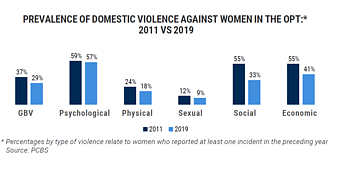 There is further evidence suggesting that domestic violence against women in Gaza has been exacerbated since the start of the Great March of Return (GMR) demonstrations, as mothers are often blamed by their husbands and held responsible for the participation and injury of their children in the demonstrations.[4]

The statistics are a reality for Noor, a 40-year-old mother of four from Gaza.[5] 10 After years of physical and psychological violence at the hands of her husband, she left him to start a better life for herself and her daughters.

She faced great difficulty, especially from community members who considered it wrong for her to leave her husband. As the sole breadwinner of the family, she also encountered a lot of suspicion when trying to find work for herself. The deep stigma and judgement she faced after leaving her husband were psychologically difficult for her to handle.

Less than 1.5 per cent of women who reported violence by their husbands have sought counselling or legal assistance.

Of concern, according to PCBS survey, less than 1.5 per cent of women who reported violence by their husbands have sought counselling or legal assistance. Likewise, 61 percent of victims reported to PCBS that they have never told anyone, such as a friend, a family member or a neighbour, about the abuse. This speaks of a culture of silence. For this reason, data on GBV are notoriously difficult to collect, making the PCBS study invaluable.

Response and gaps in addressing the needs of GBV survivors

Quality services for survivors of GBV should be multi-sectoral and involve the health, justice and social sectors.[6]The GBV Sub-Cluster under the Protection Cluster has over 60 members aiming to meet these needs.

The 2020 Humanitarian Response Plan for the oPt, launched in December 2019, includes eight projects addressing the specific needs of survivors of GBV within the humanitarian context, for which approximately US$4 million is requested. These projects entail awareness raising activities; the provision of psychosocial support, economic empowerment, legal aid, and emergency medical care. The projects pay particular attention to ensuring referral to safe and confidential specialized services, especially regarding women and girls with disability. Efforts will continue on strengthening data collection and analysis of GBV trends in Gaza and the WB and understanding barriers to accessing services, which will inform awareness and advocacy efforts, and programming.

The 2020 HRP for the oPt, includes eight projects addressing the specific needs of survivors of GBV, for which approximately US$4 million is requested.

Despite efforts by national and international actors, significant gaps in this area remain. The current system is fragmented with varying quality and services depending on the geographical area in which they are provided. Among the most pressing issues is the lack of a functioning referral system. According to the GBV Sub-Cluster information management system, around 52,000 GBV survivors were detected between 2017-2019 in the oPt. More than 24 percent of these cases did not receive any services due to lack of resources, funding and knowledge among service providers.

Noor did access help. She heard about a UNFPA-supported Red Crescent Society (PRCS) ‘safe space’, located in Jabalia camp in Gaza for female survivors of violence. She was hesitant at first, remembering the stigma she faced from her community. Convinced by promises of receiving knowledge and skills to increase her employability, she visited the centre. She was included in a programme, through which she learnt about small businesses,marketing, risk analysis and dealing with entrepreneurs.

At the centre, Noor was ensured access to counselling and provided with a lawyer free of charge to assist with the finalization of her divorce and custody proceedings for her four daughters. She attended educational, sports and embroidery classes at the centre, and began to interact with other women.

“The first and most important thing we provide is a supportive environment,” explains Mariam Shaqoura, the manager of the safe space. “We ensure that survivors get access to a comprehensive set of services including health and legal support.” However, substantial needs remain. Some areas of oPt have little or no coverage of GBV services and there is a significant need for funding to expand the reach and effectiveness of the system.

Today, Noor has found a way to recover. She received funding from PRCS technical and financial committee to start her own shop. “For years, I have dreamt of this,” she says. “The centre helped me find my feet again.”

Comprehensive efforts to provide quality services for GBV survivors, along with programmes to deal with the root causes and prevention of the problem.

However, for thousands of other women, help remains elusive. Comprehensive efforts to provide quality services are required, along with programmes to deal with the root causes and prevention of GBV. 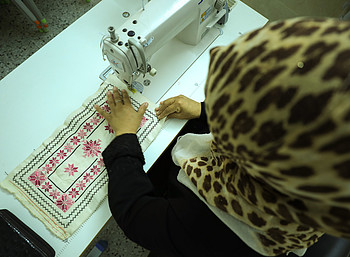 [1]:The survey targeted 12,942 households in the West Bank and Gaza Strip. The preliminary findings werereleased on November 2019. The survey includes findings about other forms of violence in Palestinian society, including by Palestinians and by Israeli forces and settlers, in a range of contexts. Some of these findings will be highlighted in upcoming Humanitarian Bulletins.

[3]: Study on Masculine Identities and Men’s Roles in the Gaza Strip, Palestine, 12 November 2018, Action Against Hunger.

[4]:There has been an additional impact by the GMR, including the expectation on women whose husbands have been killed or injured during the demonstrations to meet the financial needs of the family; expectations on women to re-marry, potentially with a brother of a husband who was killed, effectively risking her control of finances and custody of her children; and increased risk of forced child marriage due to a diseased/disabled father who can no longer provide for the family. More information on this topics can be found in Impact of the ‘Great March of Return’ on Gender-based Violence- Situation report 8 June 2019, GBV Sub-Cluster Palestine

[5]: Name has been changed to protect the identity of the survivor.

[6]: Essential Services Package for Women and Girls Subject to Violence. In humanitarian situations, the Inter Agency Standing Committee mandates all clusters with ensuring that GBV is addressed.