235,000 People across the Gaza Strip at risk of flooding

Published as part of
The Monthly Humanitarian Bulletin | November 2019

Muslih A’ta Wafi lives with his wife and seven children on the ground floor of a threestorey house in one of the lowest points of Khan Younis city. “In preparation for the 2018 winter season, we added another layer to the floor to raise it and prevent flooding,” said Muslih. “Unfortunately, this only prevented light rain from flooding the house, but whenever it rained heavily, our home flooded with a mix of sewage and rainwater. Last year, we lost most of our furniture.” 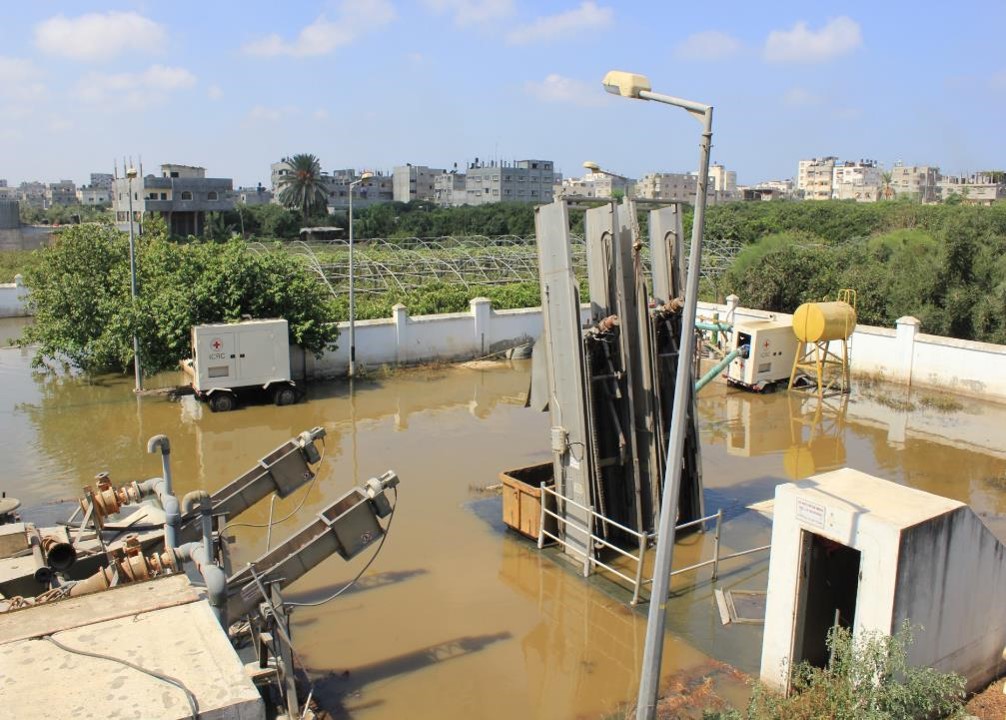 Some 235,000 people residing in 39 low-lying areas lacking adequate infrastructure across the Gaza Strip are at risk of flooding during the upcoming winter season due to possible overflow of stormwater facilities and sewage pumping stations, according to estimates by the Water, Sanitation and Hygiene (WASH) Cluster for the oPt. This may expose an already vulnerable population to waterborne diseases, property losses, disruption in access to livelihoods and services, and displacement.

The immediate reasons behind this risk are gaps in maintenance and repairs of the relevant WASH facilities, compounded by the shortage of fuel to operate backup generators during long electricity outages: both factors are driven by significant funding shortages.

In 2019, less than 74 per cent of the amount needed to operate Gaza’s 484 water and sanitation facilities was funded, leaving a critical gap of $18 million.

According to the Coastal Municipalities Water Utility (CMWU), Gaza’s main provider of water and wastewater services, the running costs of Gaza’s 484 public water and sanitation facilities are US$68 million per year, including staff salaries, fuel, electricity, chemicals and spare parts. In 2019, less than 74 per cent of this amount was funded, leaving a critical gap of $18 million. According to the Palestine Water Law, the main source of funding for the operation and maintenance of these facilities is the recovery of bills from consumers. However, recovery rates in Gaza currently stand at around 20 percent, forcing CMWU to rely primarily on support from international donors, which has significantly declined in 2019.

Infrastructure works carried out in recent years by CMWU, with the support of international donors and humanitarian agencies, have resulted in a reduction of the number of low-lying hotspots at risk of flooding from some 60 in 2017 to 39 currently.

In October 2019, a WASH Cluster partner (Action Against Hunger) conducted a technical assessment of 77 critical WASH facilities serving a population of 1.18 million and reported serious operational and maintenance deficits. Thirty of these facilities are wastewater pumping stations located in flood-prone areas. On average, 85 per cent of the spare parts needed for emergency repairs were out of stock in the assessed facilities. Moreover, while 88 per cent of the facilities assessed are equipped with backup generators, their operation may be undermined by the recurrent shortage of funds to purchase the fuel needed to run them. 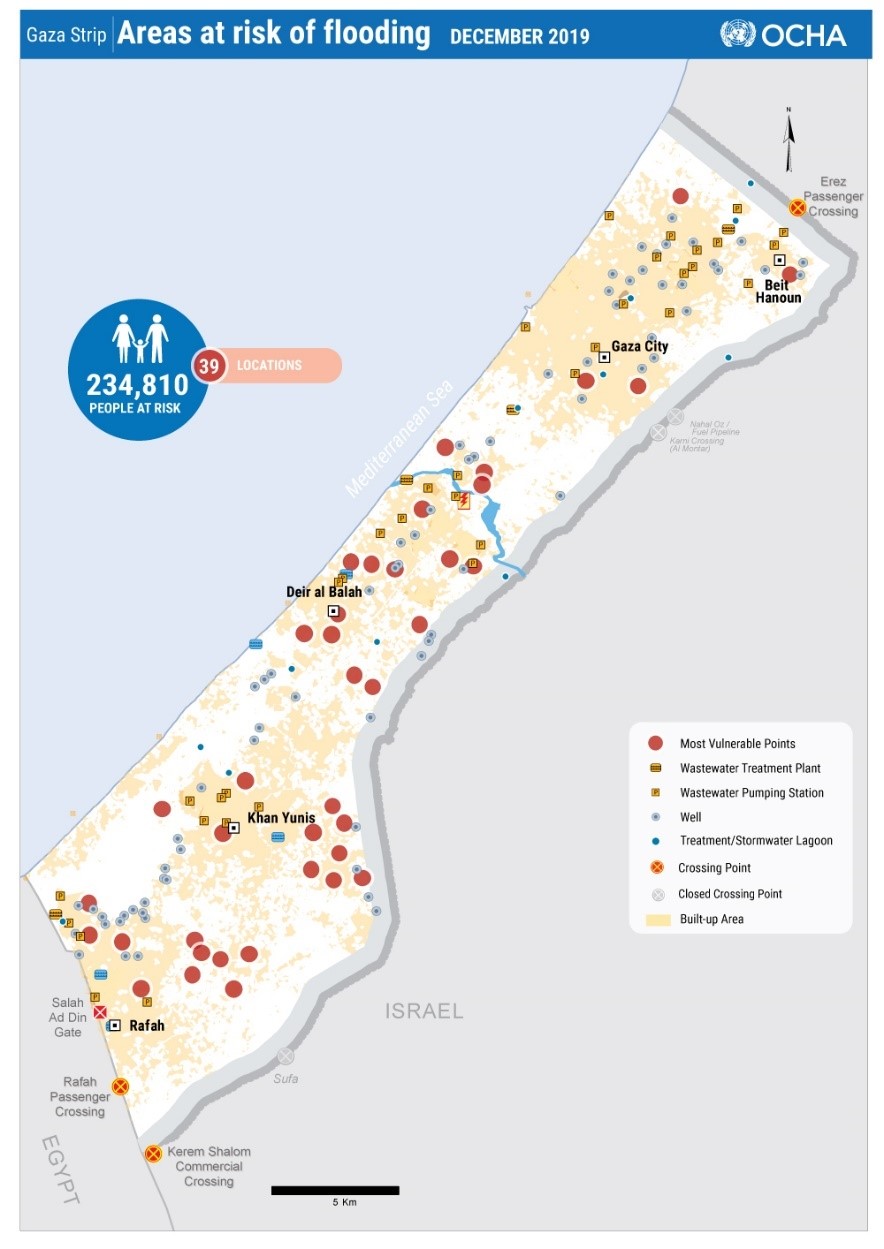 According to this assessment, some $3.5 million is needed to cover current gaps in these 77 facilities, including operational and maintenance needs, winter preparedness and fuel to run back up generators. Six partners in the WASH Cluster have recently appealed for $ 2.3 million to cover the most urgent of these gaps; as of mid-December only $320,000 were recruited.

“I have a big family, including two disabled daughters, and we put mattresses on the floor to sleep on: the water ruined it all,” explained Muslih. “Every time it rains we are forced to move up to my parents’ floor and are trapped there, sometimes with very little food and water… for my daughters this has been traumatic! Last winter we all suffered from skin rashes and we had mosquitos all year long, in addition to the unbearable smell.“

Although of major concern during the winter season, the risk of flooding is just one aspect of the crisis affecting Gaza’s WASH sector. It is estimated that nearly three-quarters of the population (or 1.5 million people) face daily constraints in accessing adequate water and sanitation services and require related humanitarian assistance. This situation has been driven by longstanding structural constraints, including the import restrictions imposed in the context of the Israeli blockade, disputes and lack of coordination between the Fatah-led Palestinian Authority and the de facto Hamas authorities, and the recurrent outbreak of hostilities.

While the humanitarian community cannot address the deeper structural issues, WASH Cluster partners have intervened to avoid a total collapse of critical facilities, which would have dire humanitarian consequences.

In September 2019, the UN oPt Humanitarian Fund, managed by OCHA, provided $900,000 for the implementation of two projects in Gaza aimed at strengthening preparedness and response capacity of communities and households at risk flooding. The projects will be carried out by two international NGOs (the Norwegian Refugee Council and WeWorld-GVC) between October 2019 and June 2020. They entail, among other activities, rehabilitating storm-water drainage systems, cleaning water streams and collection/infiltration ponds, renting heavy machinery, providing safety clothing and emergency tools to CMWU and municipal staff, and rehabilitating and/or upgrading WASH facilities at vulnerable households.

Of the $29.5 million requested in the 2019 HRP for WASH interventions, only 11 percent was raised, making WASH one of the most poorly-funded sectors.

However, the ability of agencies to address current gaps has been undermined by serious funding shortages. Of the $29.5 million requested in the 2019 Humanitarian Response Plan for WASH interventions, only some 11 per cent was raised, making WASH one of the most poorly funded sectors.

Cluster partners have also collaborated with development actors to promote sustainable solutions. Only a dual approach that meets immediate humanitarian needs as well as the promotion of sustainable facilities, with a focus on mid-to-longer term investments and sustainable cost recovery, will bring durable solutions to the WASH sector in Gaza.

Muslih remains hopeful: “So far it hasn’t rained and we really hope that the rain will be light this year.”