Published as part of
The Monthly Humanitarian Bulletin | November 2019

Basheer Sous, President of the Beit Jala Farmers’ Society, owns several plots of land in the Al Makhrour area of Beit Jala in Bethlehem governorate, which he shares with his brothers. Al Makhrour extends for approximately 3,000 dunums and in addition to Beit Jala, includes land which the villages of Al Walaja, Batir, Husan, Wadi Fukin and Nahalin have traditionally used (see map). The apricot, olive, fig and almond trees in Al Makhrour, irrigated by natural springs, are an important source of livelihood for farmers from these communities.

More than 85 per cent of Bethlehem governorate is designated as Area C, the vast majority of which is off limits for Palestinian development.

On the largest plot, some 85 dunums, Basheer grows olives, grapes and apples. In October, a group of diplomats accredited to the Palestinian Authority came to assist him with the olive harvest.

“It’s good that the diplomats come to help us. It is important that Palestinians continue to have a presence in Al Makhrour. The olive trees we’re picking today were planted by my father 30 years ago. He understood that if we don’t cultivate the land we will lose it, so he planted these trees here on purpose. He always said that we must love and plant our land.”

Some 230,000 Palestinians live in the Bethlehem governorate, which extends for over 660 square kilometres from the agricultural breadbasket in the western part to the Dead Sea in the east. However, access to these natural resources for Palestinians has been increasingly restricted since the occupation began in 1967 due to annexation, land confiscation, the building and expansion of settlements and bypass roads, andthe Barrier.     [1] More than 85 per cent of the governorate is designated as Area C, the vast majority of which is off limits for Palestinian development, including (in Bethlehem governorate alone) almost 38 per cent declared as “firing zones”, 34 per cent as “nature reserves”, and nearly 12 per cent allocated for settlement development.[2] Only approximately 13 per cent of the governorate’s land is available for Palestinian use, and much of this is built up already and, overall, fragmented.

Al Makhrour is one of the few remaining agricultural and recreational spaces still left for Palestinians in Bethlehem and is strategically placed between Jerusalem and the Gush Etzion settlement block.

According to Basheer, “Many of the farmers here in Al Makhrour find it hard to continue because of all the restrictions. Because we are in Area C, building or renovation is not allowed without permission from the Israeli Civil Administration, not even for the smallest thing. I had a marble slab which I used to cover one of the wells on my land. It was stolen last year, so I replaced it with a new cement cover and metal grille. I received a demolition order for this and a visit by the Civil Administration to warn me that they would take a bulldozer to demolish it if I didn’t. They came three times, so in the end  demolished it myself.”

Al Makhrour is one of the few remaining agricultural and recreational spaces still left for Palestinians in Bethlehem.

Although there are some small agricultural structures in Al Makhrour, residential building is prohibited due to the restrictive planning regime applied by Israel on Palestinians in Area C. On 26 August 2019, the Israeli authorities demolished a house and a restaurant belonging to the Qaisieh family in Al Makhrour. Five members of the family were displaced and 12 workers lost their livelihoods due to the destruction of the restaurant, which was previously demolished in 2012 and 2013, also for lack of a building permit. The demolitions followed a long legal process dating back to 2005, with the most recent initiated in 2017 by ‘Himnuta’, a subsidiary of the Jewish National Fund(JNF). Himnuta has reportedly purchased thousands of dunums of land in the West Bank since the Israeli occupation began in 1967[3] and claims to have purchased the land on which the home and restaurant were built in 1969. This is disputed by the Qaisieh family who insist they never sold the land.

Residential building is prohibited in Al Makhrour due to the restrictive planning regime applied by Israel on Palestinians in Area C.

Shortly afterwards, in early September, Israeli settlers established a new settlement outpost next to the site of the demolished Qaisieh buildings. A number of temporary structures were set up and the land was fenced off. According to some reports, Himnuta has leased the land to nearby Neveh Daniel settlement for agricultural use. However, no permits have been issued for the construction of buildings at the site and the Israeli Civil Administration has reportedly pledged to remove the outpost, which is currently still in existence.  [4] 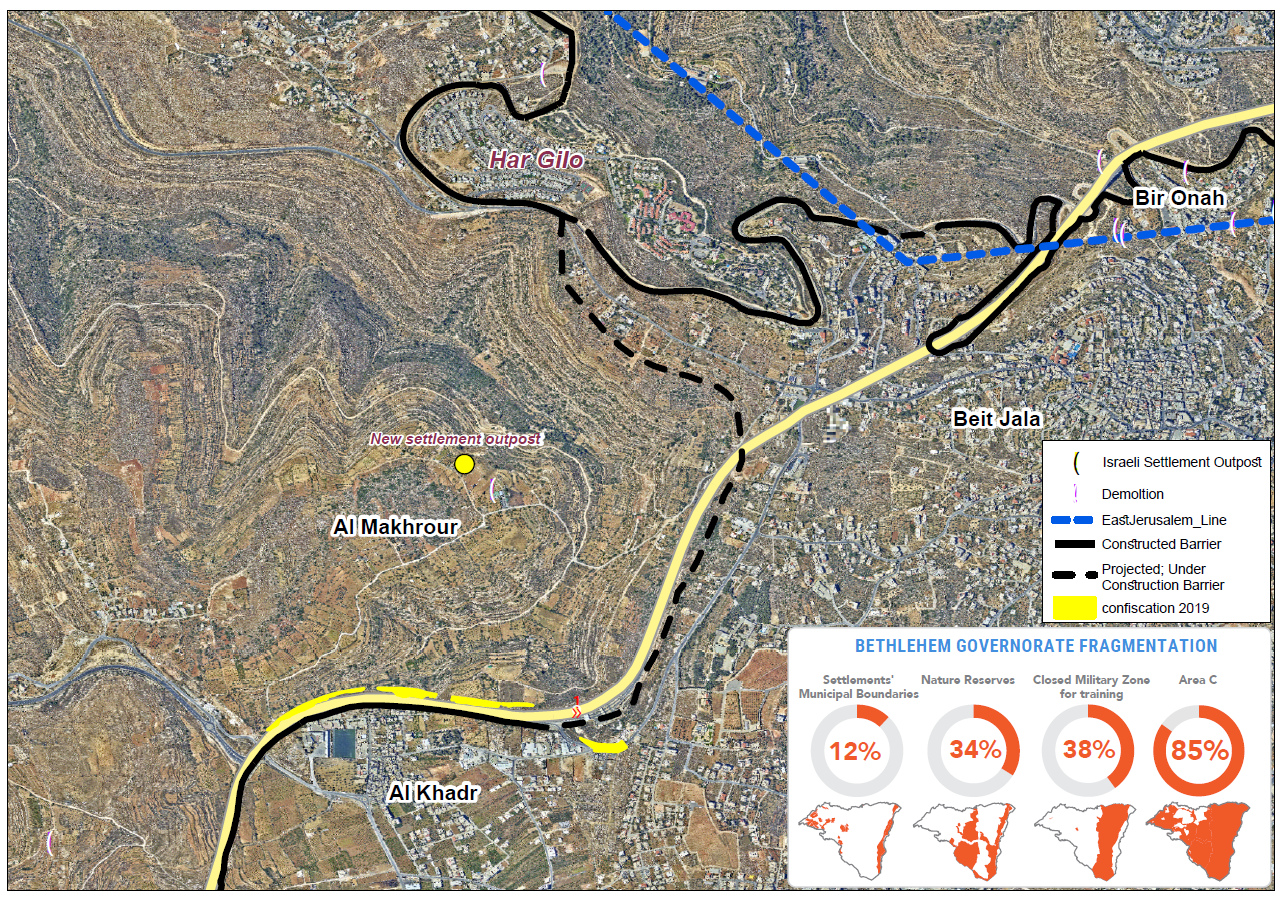 On 1 September, confiscation orders were issued for approximately 2.8 dunums of Palestinian land in the Al Makhrour area for the purpose of building a new tunnel and bridge. The new infrastructure is intended to ease heavy traffic on the existing tunnels and bridge road, which was built on land confiscated from Beit Jala in the 1990s as part of the re-diversion of Route 60 to bypass Bethlehem and connect the Gush Etzion settlement block to Jerusalem.[5] 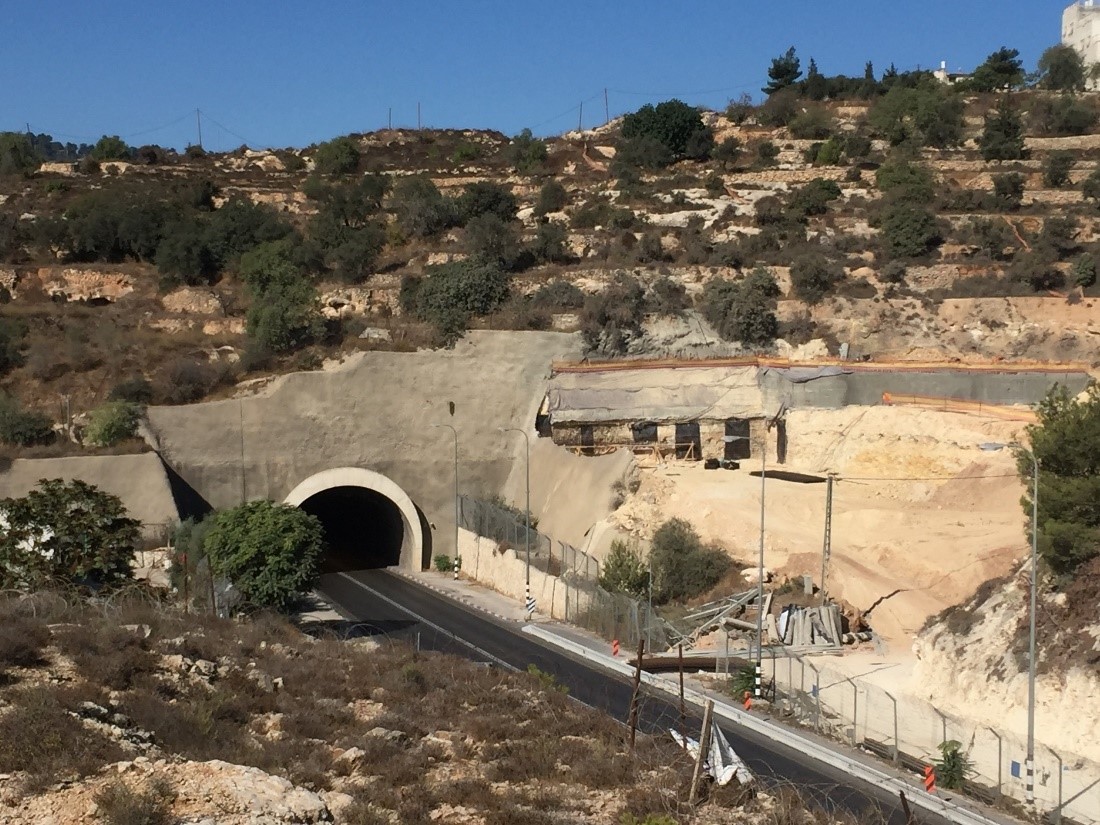 Basheer was affected by the construction of the first bypass road. “When they built the first bypass road back in 1995, they demolished some buildings on another part of my land and took two dunums from me. Then on this part here, and the next plot which belongs to a neighbour, the construction company dumped all the boulders and rocks from the excavation. I went to court and eventually they agreed to restore and renovate the land affected.

“Recently, on a third piece of land I have in Al Makhrour, I noticed some metal rods on my land and green and yellow markers with Hebrew symbols on the trees. I haven’t received any official notification but I’m afraid it’s related to the new bypass road they plan to build.”

In early September,construction began on a new ten-kilometrelong bypass road in the Hebron area.

Despite all the pressures, Basheer is determined to continue. “A few weeks back when I was working the land by myself, an army jeep came and [the soldiers inside] asked me what I was doing. I told them I was working my land. That’s why it’s good to have the internationals here today to give me support. We Palestinians need support in our struggle to gain our rights and freedom.”

In September 2018, Caritas-Jerusalem, a humanitarian and development NGO signed a memorandum of understanding with the Municipality of Beit Jala to continue implementation of the project “Enhancement of Food Security and Livelihoods through  Agroecology Land Rehabilitation and Water Retention Landscape in Al Makhrour area in Beit Jala”. In phase I of the project, 125 dunums were rehabilitated in Al Makhrour. In the process, 55 temporary jobs were created for skilled and unskilled labourers and 10 training sessions held on agroecology. Phase II will complete the work started in other parts of Al Makhrour and, according to Caritas, will be the biggest agroecological project in Palestine. The project is funded by the Municipality of Zaragoza in Spain and Caritas Spain.

All settlements are illegal under international humanitarian law. Outposts are settlements which have been established in contravention to Israeli law as well, but with the acquiescence and often active support of the Israeli authorities. More than 120 settlement outposts have been established since the late 1990s, some of them agricultural and livestock farms affecting large swathes of land. According to Peace Now, to date, 15 outposts have been legalized (“regularized”) under Israeli law as independent settlements or “neighbourhoods” in existing settlements, while at least 35 additional outposts are undergoing legalization processes.[6] The takeover of land for the establishment of these settlements has deprived Palestinians of their property and undermined their sources of livelihood. Some of the outposts are also a source of constant attacks and intimidation against Palestinians. Their legalization by the Israeli authorities compounds the already serious concerns about lack of accountability regarding settler violence.

In early September, construction began on a new ten-kilometre-long bypass road in the Hebron area, between Gush Etzion junction and the southern entrance of Halhul. Some 400 dunums of land were confiscated in April 2019 to build the road, which was first proposed in 2003 and approved in 2012. The road is primarily designed to enable settlers to travel in and out of Hebron without having to pass close to Al ‘Arrub refugee camp and Beit Ummar village. According to the Israeli District Coordination and Liaison Office (DCL), the project, which will be completed by 2022, will cost hundreds of millions of shekels and will significantly reduce traffic congestion and accidents, benefitting both settlers and Palestinians.

Much of the land through which the bypass road will pass is cultivated with fruit and olive trees, particularly vines, for which the area is celebrated. According to the Palestinian Ministry of Agriculture and to the municipalities most affected, Halhul and Beit Ummar, an estimated 33,000 mainly fruit trees will be uprooted. At least seven existing agricultural roads will be blocked and up to 5,000 dunums of land will be isolated by the construction of the road, which will form a physical barrier between the communities and their agricultural land. 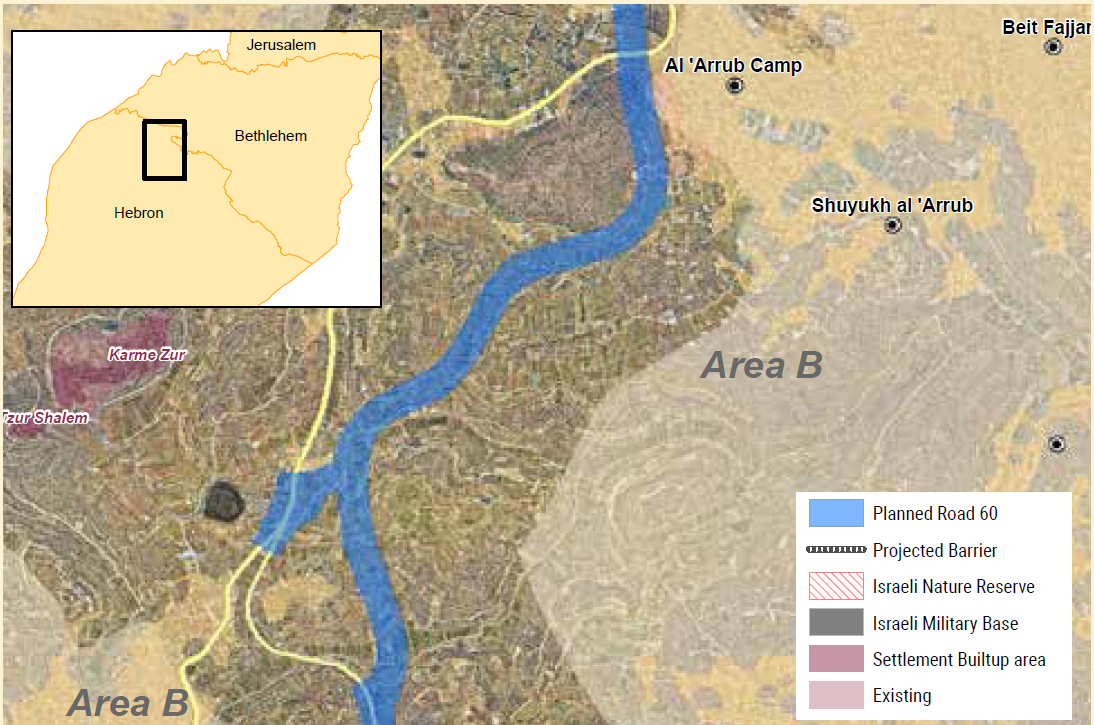 [1]: After 1967, the Israeli government annexed approximately 10 km2 of the northern Bethlehem governorate to Israel, incorporating these lands within the newly expanded Jerusalem municipal boundary. This annexation is not recognized by the international community. Currently, there are over 100,000 Israeli settlers residing in 19 settlements and settlement outposts across the governorate, including in those parts de facto annexed by Israel to the Jerusalem municipality.

[2]: These figures include areas designated as “nature reserves” in the context of the 1998 Wye River Agreement between Israel and the PLO, and which are de facto administered as Area C. The three categories within Area C partially overlap. OCHA Factsheet, Bethlehem governorate: fragmentation and humanitarian concerns, January 2015.

[3]: According to Peace Now, at least 65,000 dunums of West Bank land have been purchased by the JNF since 1967. “These areas are or have already been used to build and expand settlements and to expel Palestinians with private property claims of their own.”

[5]: According to Peace Now, following the construction of the original Tunnels Road in 1995, “within 6 years the population of the settlements along the road doubled, and in ten years tripled (from 15,515 setters in 1995 to 30,853 settlers in 2001 and 45,870 in 2006. Today there are 76,976 settlers in the settlements lying a commute away from Jerusalem through the Tunnels Road.” Confiscation Orders Issued for the Widening of Bethlehem Bypass Road for Settlers, 9 September 2019.