As is the case globally, the COVID-19 pandemic has been the dominant concern in the occupied Palestinian territory (oPt) in recent months. On 5 March 2020, the Palestinian Prime Minister declared a State of Emergency after the first cases were confirmed in Bethlehem city. Measures included the suspension of most commercial and all educational activities, a prohibition on public gatherings, and strict movement restrictions. The emergency was subsequently extended until early June, but has effectively ended since late May, with banks, government ministries, shops, and public transportation networks reopening. In the Gaza Strip, the Israeli-controlled Erez Crossing and Egyptian-controlled Rafah Crossing have been largely closed since mid-March, with incoming travellers sent to quarantine facilities for 14 days, subsequently extended to 21 days. Overall across the oPt, there has been a remarkably low incidence of cases by global standards, with just five fatalities recorded. As of the beginning of June, 630 Palestinians in total are confirmed to have contracted COVID-19, including 179 in East Jerusalem, 390 in the remainder of the West Bank, and 61 in the Gaza Strip

Two years on: people injured and traumatized during the “Great March of Return” are still struggling

Mohammed, 35 and father of three, from Beit Hanoun, was shot with a live bullet in the leg during the first “Great March of Return” (GMR) demonstration on 30 March 2018. “I went through 25 surgeries, but I’m still in pain,” he told OCHA. As a result of his disability, Mohammed lost his job as a construction worker and the economic situation of his family began to deteriorate. “My wife couldn’t bear with my situation and with the poverty, so we got divorced. My life is nothing, but a misery.”

A crisis within a crisis: fighting Gender-Based Violence (GBV) during COVID-19 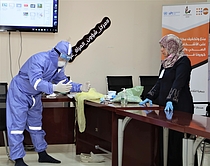 Maha (pseudonym) a 40-year-old mother of three, reside in Al-Bureij, one of the poorest and most crowded refugee camps in the central Gaza Strip. Nearly four in ten women in the Gaza Strip face domestic violence, mostly by their partners.  Maha is one of them. 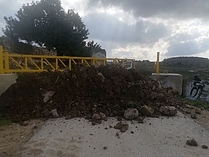 To contain the spread of COVID-19, governments around the world have imposed sweeping restrictions on the freedom of movement of people, severely disrupting their lives. While the occupied Palestinian territory (oPt) is no exception, with measures being imposed by both Israeli and Palestinian authorities, these have served to exacerbate longstanding access restrictions that are imposed by the Israeli authorities.