A crisis within a crisis: fighting Gender-Based Violence (GBV) during COVID-19

Published as part of
The Humanitarian Bulletin | March-May 2020

Maha (pseudonym) a 40-year-old mother of three, reside in Al-Bureij, one of the poorest and most crowded refugee camps in the central Gaza Strip. Nearly four in ten women in the Gaza Strip face domestic violence, mostly by their partners.[1] Maha is one of them.

Maha’s relationship with her husband was strained even prior to the COVID-19 crisis, but deteriorated further as the crisis unfolded. Living conditions in Gaza have been undermined by the longstanding Israeli blockade and intra-Palestinian conflict, and exacerbated by recurrent hostilities and clashes. Maha’s husband, angry and frustrated about his lack of steady income and limited ability to provide for his family, has regularly abused her, both verbally and physically. As the crisis worsened, and her husband was forced to spend more time at home, the violence increased, both in frequency and severity. “Sometimes I feel that this is a nightmare that I will eventually wake up from, but the nightmare is never-ending, and I do not know how much longer I can handle this,” Maha explains. 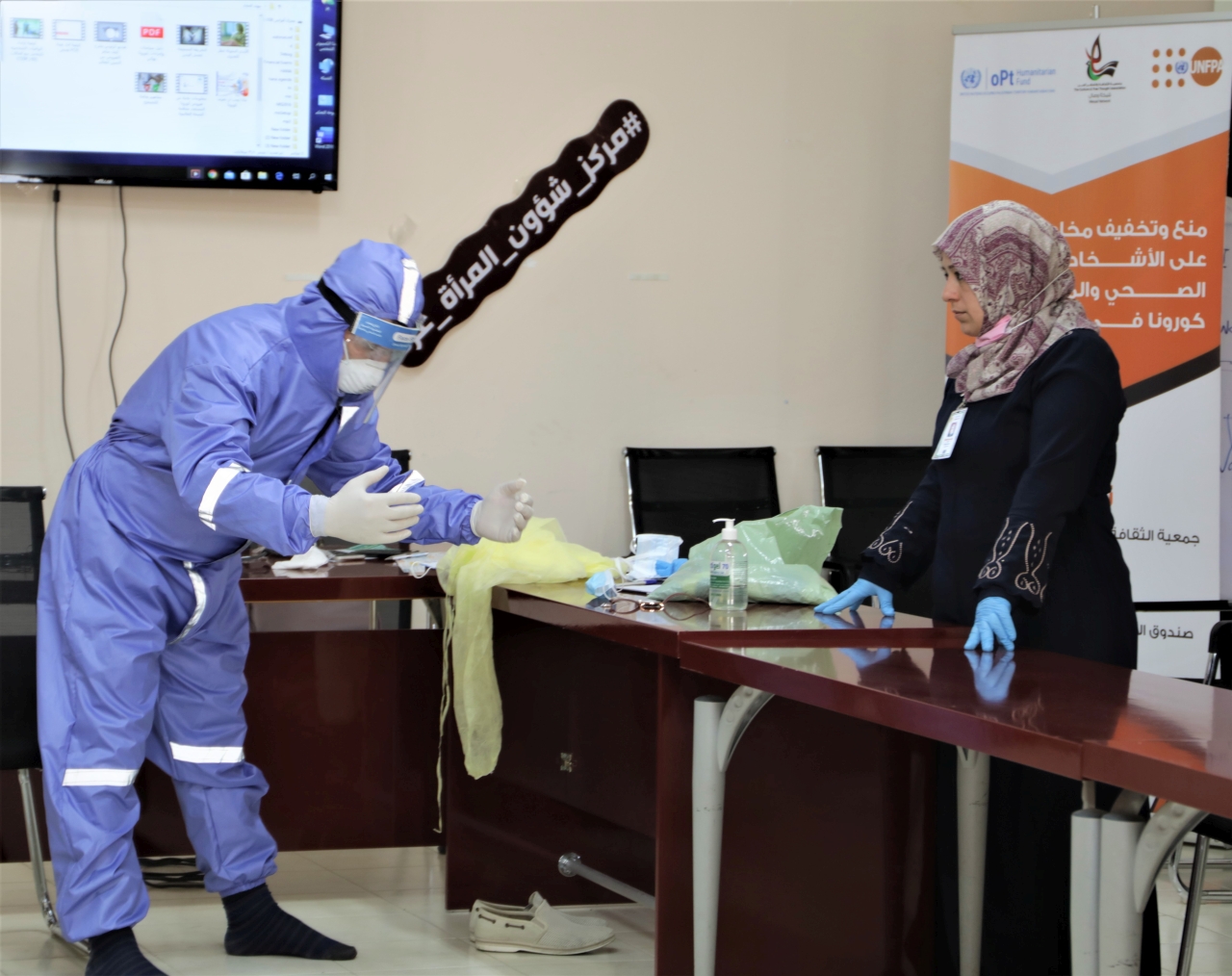 Based on an assessment conducted by UNFPA, the COVID-19 crisis, the state of emergency declared on 5 March and the subsequent lockdown, have exacerbated women and children’s vulnerabilities. This has placed them at increased risk of various forms of violence, including intimate partner violence. Fears about the virus, economic stress and quarantine measures, have increased household tension, compounding domestic violence.

The Women Center’s for Legal Aid and Counselling reported a 69 per cent increase in GBV consultations across the oPt in April, compared with March. According to SAWA, a Palestinian Non-Governmental Organization (NGO) running a helpline in the oPt, calls related to abuse and violence also increased by 20 per cent on a weekly basis, between the last week of March and 9 April. The week after, a 43 per cent increase of such cases was reported, with 54 calls from women and 26 calls from men, the vast majority of which originated from the Gaza Strip.

Disease outbreaks affect women and men differently and epidemics exacerbate existing gender inequalities. At the same time, the very services required by, mainly, women and girls during such crises, including safety, security and access to justice, are disrupted or reduced, as resources are diverted to respond to the crisis and its health and socio-economic consequences.

Due to movement restrictions and lockdown measures imposed since the COVID-19 crisis, life-saving care and support to GBV survivors have been curtailed in the oPt, creating a response gap both for survivors and those at risk of GBV. Face-to-face interaction and access to GBV services in safe spaces have been significantly reduced or, in most cases, completely suspended. The government-run shelter in the Gaza Strip has been closed and West Bank shelters were instructed to not admit new cases unless they underwent quarantine for 14 days, a challenge for shelters not set up to include quarantine facilities.

At least 24 organizations responding to GBV across the oPt[2] have shifted their service modalities and started, as early as mid-March, to provide support remotely. Hotlines and online chat groups were set up while awareness-raising activities on TV, radio and social media significantly increased. The organizations distributed food and dignity/hygiene kits to GBV survivors and families at risk, including those in quarantine. Mental health and psychosocial support (MHPSS), legal aid and case management have been provided by lawyers and social and health workers via landlines and mobile phones. By the end of April 2020, these organizations had reached 3,130 women and girls in the Gaza Strip and 3,162 women, girls, boys and men in the West Bank.[3]

Since 22 March, Palestinian Working Women’s Society for Development (PWWSD), an NGO, has provided 1,417 remote consultations and 1,168 counseling sessions over the phone to 597 cases in the Gaza Strip and the West Bank, 988 of which directly related to GBV. Maha is one of the many people represented in these figures.

Maha has no relationships outside her immediate family. She feels too embarrassed to reach out to her neighbours, as they have most likely overheard her husband’s verbal abuse and she does not wish to be pitied by anyone. Her attempt to build a healthy relationship with her children has also been severely affected by the violence; while her children still love her, she feels that they do not respect her, especially her oldest son, who blames his mother for the family’s problems. Her daughter, on the other hand, suffers from nightmares and bed-wetting, probably due to the domestic violence.

Maha got in touch with a counsellor from the PWWSD, with whom she communicated whenever her husband was not at home. Through the counselling, Maha found a safe virtual space to express her feelings, relieve her stress and receive support on how to protect herself and her children from danger. She received advice on how to establish a constructive dialogue with her husband and provided with information on the availability of other protection mechanisms, such as local shelters.

“After speaking to you,” she told the counsellor, “and being taught breathing exercises, how to better deal with my husband, to calmly explain the problem and how it affects me without crying and shouting, the situation has improved... I feel that the situation has become more bearable, and, while not enough, I am happy with this achievement”, Maha said.

While the world anxiously awaits the gradual easing of lockdown measures as the number of people confirmed to have COVID-19 declines, women like Maha must not be forgotten. Urgent efforts are required to scale up current services to prevent GBV, support its victims and contain this crisis within a crisis.

[2] 15 organizations responding to GBV in the West Bank and nine in the Gaza Strip; See emergency GBV service directories during COVID-19 developed by GBV Sub-Cluster.

[3] Based on weekly inputs collected by the GBV Sub-Cluster in Gaza and the West Bank.