Since the beginning of the current escalation of violence, Hebron city has had the highest number of Palestinian casualties in a single locality, followed by East Jerusalem. In response to the unrest, the Israeli authorities have intensified restrictions on Palestinian movement to, from and within the city, and have renewed the practice of punitive demolitions. This has impacted access to services and livelihoods and raised concerns about the potential forcible displacement of residents. Human rights organizations have expressed concern that the sweeping nature of the access restrictions constitutes a form of collective punishment, prohibited under international law.[1] 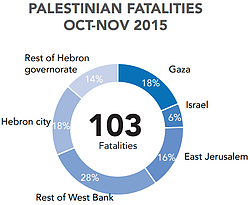 During October and November, a total of 18 Palestinians, including four children, were killed in Hebron city by Israeli forces and settlers. Another 811, including 321 children, were injured. These figures account for 23 percent of total deaths and eight per cent of total injuries recorded during this period in the entire West Bank.

Fifteen (15) of those killed were perpetrators or alleged perpetrators of attacks against Israeli forces and settlers in the city (mostly stabbing or stabbing attempts), which resulted in one Israeli fatality and six injuries. The circumstances surrounding most of these incidents remain disputed, and there are concerns about excessive use of force and unlawful killing in cases where it is not evident that the individual shot presented an imminent threat to life at the time.[2]

The majority of Palestinian injuries were recorded during protests and related clashes between Hebron residents and Israeli forces: 27 per cent of injuries were from live ammunition.

Settler violence increased markedly in Hebron city and governorate during October and November 2015, with at least 61 attacks resulting in Palestinian injuries or property damage. Several of these attacks reportedly took place in the presence of Israeli soldiers, who refrained from intervening.

Since early November 2015, Israeli forces have intermittently blocked three of the main access roads leading into Hebron city. Access through some of these routes, when open, has been controlled by military checkpoints. Documentation is checked and vehicles are searched, resulting in long queues and delays. These restrictions have forced residents of Hebron and dozens of adjacent towns and villages to use long detours to access their homes, services and places of work within the city.

There are five Israeli settlements established within the city itself, in an area directly controlled by the Israeli military (H2). The settlement area has been segregated from the rest of the city for the past 15 years by approximately 95 physical obstacles, including 19 permanently staffed checkpoints. The area includes the bulk of Hebron’s Old City and is home to over 6,000 Palestinians living alongside several hundreds Israeli settlers.[3]

Since mid-October 2015, the settlement area has been further isolated from the rest of the city by new razor wire and concrete blocks to channel Palestinian pedestrian movement through one of the staffed checkpoints (see map attached). Inspection and body searches at the latter have become significantly more intensive.

Two of these checkpoints control access into the Tel Rumeida neighbourhood, home to some 100 Palestinian families, and is only accessible to Palestinian residents who register in advance with the Israeli authorities. Another checkpoint prohibits access to Palestinian males between 15 and 25 years of age who are not residents of the restricted area. Initial reports indicate that these restrictions have forced a number of families in the worst affected locations to leave their homes and relocate elsewhere. 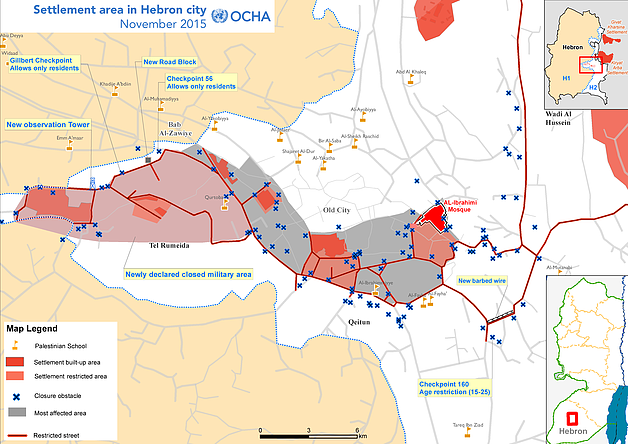 The impact of the violence and access restrictions on schools is of particular concern. According to the Palestinian Ministry of Education, there are 4,200 children (2,481 boys and 1,719 girls) studying in 15 schools across the city who must cross at least one checkpoint and undergo inspection and searches in order to reach school. One of those most affected is Qurduba school; 130 children and 20 school staff members have to pass two checkpoints (Gilbert and checkpoint 56) to get to the school. These are among the most restrictive checkpoints and have been the scene of six stabbing incidents (carried out or attempted) against Israeli forces deployed at these sites, all of which ended in the killing of the perpetrators.

The functioning of each of these 15 schools has been disrupted to varying degrees since the beginning of October, primarily due to delays and the psychological impact on students and staff. Classes at some schools have been also disrupted due to the frequent clashes taking place in their vicinity, which resulted in the infiltration of tear gas into school buildings. On four occasions during October, Israeli forces raided schools and detained a number of children accused of stone throwing, according to the Ministry of Education.

[1] See here for example, Al Haq, Special Focus on Hebron: A Microcosm of the Israeli Occupation.

[2] See here joint statement by the United Nations Special Rapporteurs on the situation of human rights in the OPT, and on summary executions.