Posted on 13 June 2016
as part of
Fragmented Lives: Humanitarian Overview 2015

“We condemn, in the strongest terms, all attacks against Israelis and Palestinians alike. The recent wave of knife attacks and shootings is particularly appalling. There can be no justification for such despicable acts... [however] This crisis would not have erupted, I suggest ... if Palestinians did not still live under a stifling and humiliating occupation that has lasted almost half a century”

This is the fifth year in which the United Nations Office for the Coordination of Humanitarian Affairs (OCHA) has detailed the key humanitarian concerns in the occupied Palestinian territory (oPt). The purpose of the report is to provide a comprehensive overview of the underlying causes or drivers of the humanitarian vulnerabilities in the oPt in a given year.

In 2015, the major drivers of humanitarian vulnerability in the oPt remained unchanged and were directly linked to Israel’s protracted occupation, now approaching its 50th year. The situation continued to be characterized by violations of international humanitarian law by all parties, the systematic denial of Palestinian rights and continuing conflict, punctuated by frequent outbreaks of violence.

Vulnerability was most acute in Gaza, where the suffering resulting from the 2014 hostilities - with close to 90,000 Palestinians still displaced during the second half of 2015 - was compounded by an eight year blockade by Israel, the almost continuous closure of the Rafah passenger crossing by Egypt, and by internal Palestinian divisions. The precarious living conditions of displaced girls and women raise a range of protection concerns, including increasing exposure to gender-based violence.

These conditions continued to cause a protracted protection crisis with humanitarian consequences, where Palestinians face a range of threats that undermine their ability to live selfsustaining lives and prevent the enjoyment of their rights, including the right to self-determination.

At the end of 2015, 4.8 million Palestinians were estimated to be affected by this situation, with 2.3 million in need of humanitarian assistance, including 1.3 million in Gaza. To meet these needs, the 2016 Humanitarian Response Plan (HRP) for the oPt was launched in February 2015, comprising 206 projects worth US$ 571 million. 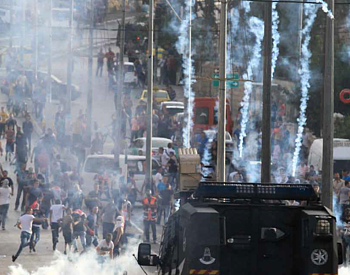 As in previous years, the Humanitarian Overview for 2015 is structured around the key concerns and advocacy priorities identified by humanitarian partners in the oPt: Life, Liberty & Security, which includes Palestinian and Israeli casualties from conflict-related violence, settler violence and the detention of Palestinians; Forced Displacement, driven by escalations of hostilities in Gaza and by the demolition of homes for lack Israeli-issued building permits, punitive demolitions and other practices in the West Bank; Movement & Access, focusing on the physical and administrative restrictions placed on the movement of Palestinian people and goods throughout the oPt; Humanitarian Space, detailing the obstacles that restrict the access of personnel and materials needed for humanitarian projects; and Accountability, a cross-cutting theme, essential to reduce future vulnerability, addressed throughout. Each of the four main sections is updated to include the significant developments and trends in the first four months of 2016.

The Way Forward section details the main steps required on the part of the Israeli authorities, Palestinian authorities and armed groups, to rectify policies and practices inconsistent with international law, protect the rights of Palestinians living under occupation and reduce humanitarian vulnerability.