In 2015, humanitarian organizations continued to face a range of obstacles from the Israeli authorities regarding the access of personnel, especially national employees, and the materials needed for humanitarian projects. These include physical and administrative restrictions on the access and movement of humanitarian actors; restrictions on the delivery of materials needed for humanitarian projects; and limitations on the implementation of projects that involve building, expanding or rehabilitating infrastructure in the Gaza Strip and Area C of the West Bank. Such obstacles have hampered the ability of humanitarian organizations to provide assistance and protection to Palestinians throughout the oPt. Humanitarian operations in Gaza were also impeded by restrictions imposed by, and the prohibition on contact with the Hamas authorities, in addition to the prolonged closure of the Rafah crossing with Egypt. 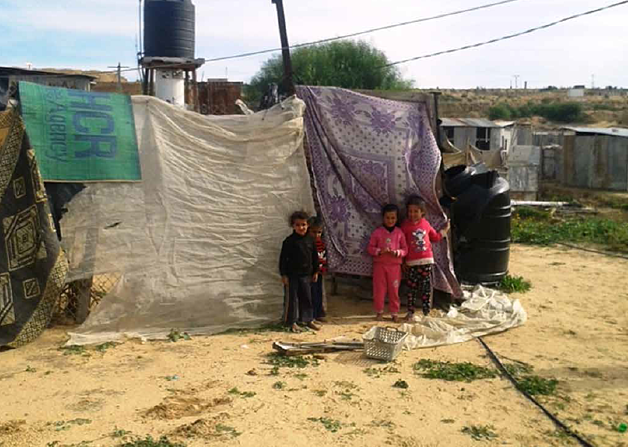 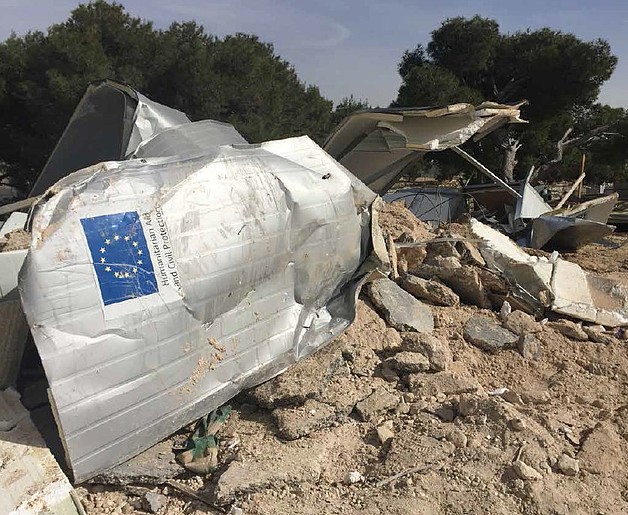 “Protective presence organizations are on the front line of this work in the occupied Palestinian territory, embodying the support of the world community to the people of Hebron and defending the rights of Palestinian children, not least to a safe journey to and from school. They must be allowed to continue their work without violence, threats or retaliation.”

With the blockade on Gaza still in place, the UN-brokered Temporary Gaza Reconstruction Mechanism (GRM) continued to operate in order to facilitate the entry of restricted goods, primarily building materials, to address the enormous reconstruction and recovery needs arising from the 2014 hostilities. During the year, Israeli authorities introduced several relaxation measures (see Movement and Access Restrictions section), which allowed for an acceleration in the pace of work. However, restrictions on the movement of humanitarian actors, as well as on imports, continued to seriously limit the pace of construction and the type and scope of humanitarian operations. These obstacles were compounded by the prolonged closure of the Rafah crossing by Egypt, and new restrictions on the movement of humanitarian staff by the de facto authorities in Gaza. Restrictions imposed by counter-terrorism legislation and the “no contact” policies with the de facto authorities posed further challenges on the operational environment of humanitarian and developmental actors. 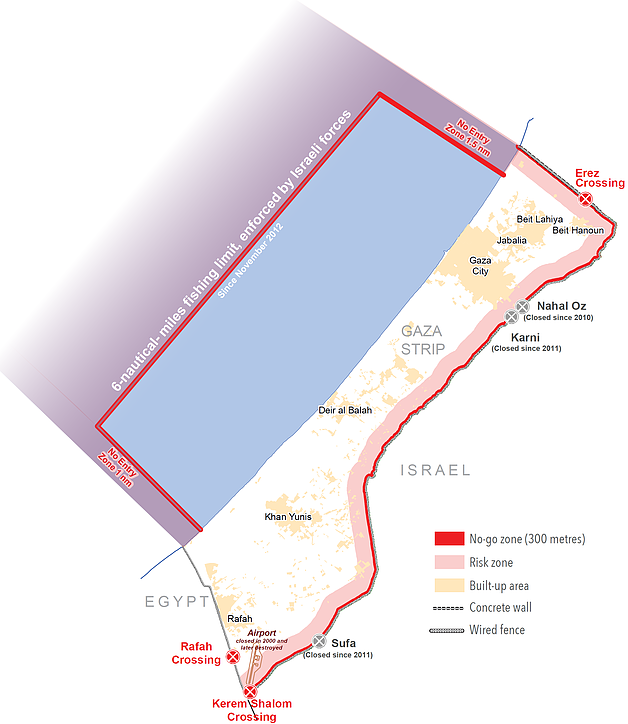 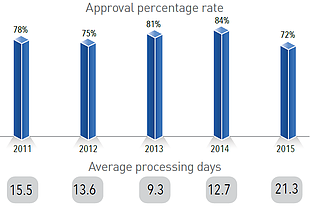 The approval rate of permit applications from UN national staff by the Israeli authorities slightly decreased compared to 2014, alongside an increase in the average processing time, which was the longest in the last five years. The ban on the entry of staff with East Jerusalem residency or Israeli citizenship into Gaza since July 2015 led to a sharp decline in the overall number of applications from these categories in 2015 compared to 2014 (46 vs. 134 applications). At the same time, the rate of approval for these categories during 2015 increased compared to the previous year (74 vs. 52 per cent). The de facto authorities in Gaza also added an additional layer of restrictions affecting humanitarian actors’ operational space, including on the movement of staff and access to certain areas, and the introduction of a permit regime applicable to national staff for the exit and entry into Gaza. 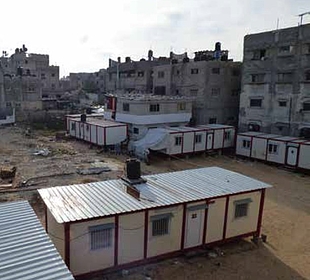 The number of partaking stakeholders in the GRM, reached over 130,000 by 31 December 2015.[1] In July, the “residential stream” of the GRM was introduced, enabling for the first time the reconstruction of homes that were completely destroyed during the 2014 hostilities and the construction of new residential structures. Prior to that, the “shelter stream” only covered repairs to damaged or partially destroyed structures. The removal of aggregates from the list of goods identified by the Israeli authorities as having a “dual use” (civilian and military) has also had a positive impact. A reduction in the thickness of permissible wood, in August 2015, has had a very negative impact on projects, including temporary housing solutions for IDPs. By the end of the year, the vast majority of health and educational facilities destroyed or damaged during the war have been repaired or reconstructed.[2]

UN Board of Inquiry

On 27 April 2015, a summary of the UN Board of Inquiry’s report was released concerning incidents affecting UN premises during the 2014 hostilities. The report indicated that the attacks affecting seven of these premises used as emergency shelters, which resulted in the death of 44 Palestinians and the injury of over 227, were attributable to Israel. Palestinian groups were found responsible for hiding weapons in three UN facilities that were not being used as shelters at the time.[3] 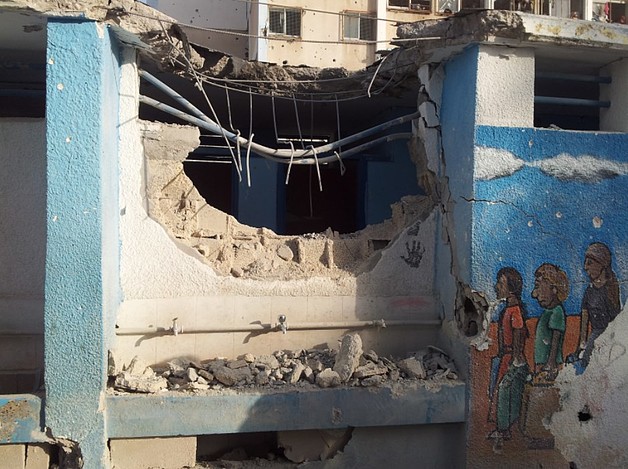 The implementation of humanitarian projects continued to be impeded by restrictions on access to East Jerusalem and limitations on projects involving the provision/expansion/rehabilitation of shelters and other structures in Area C. The operational capacity of some organizations, human rights defenders and health providers, in particular, was also hampered by Israeli forces and settlers, including through restrictions on their access and movement, and threats against, attacks on, and arrest of their staff.[4]

The implementation of humanitarian projects in Area C and East Jerusalem involving activities such as the delivery of emergency shelters or the rehabilitation of basic infrastructure continued to be severely hampered by the discriminatory and unlawful zoning and planning policy applied by the Israeli authorities in these areas. In 2015, citing lack of building permits, the Israeli authorities demolished, dismantled and/or confiscated 108 donor-funded structures provided as humanitarian assistance to Palestinians, compared to 116 structures in 2014 and 109 in 2013. Almost all such structures were located in Area C, with around 50 per cent located in the Jordan Valley and areas designated as closed military zones.

Demolitions, confiscations/dismantlement of donor-funded assistance on grounds of lack of permit 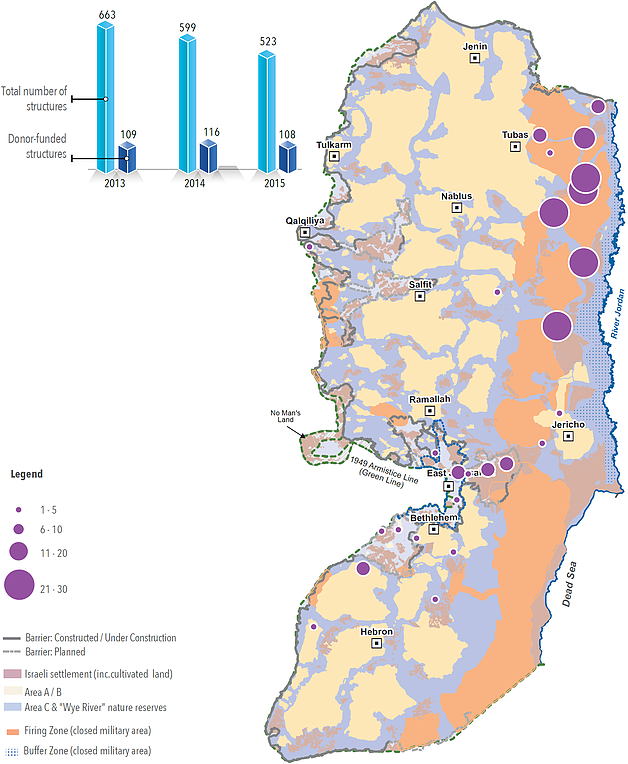 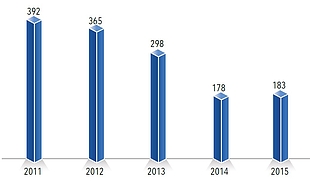 The number of incidents obstructing or delaying the movement of UN and international organization employees in the West Bank, including East Jerusalem, was nearly the same as in 2014, well below the figures recorded in previous years. The declining trend in recent years can be attributed, to some extent, to the humanitarian staff’s systematic avoidance of the most difficult checkpoints, at the expense of reliance on longer and more expensive routes.

Israeli forces and settlers increasingly obstructed the work of human rights defenders, including international, Palestinian and Israeli organizations, volunteers and local groups. This was particularly evident during the last quarter of 2015, in the context of the provision of a protective presence during the olive harvest and in the Israeli-controlled part of Hebron city, “H2”.[5] Some of these actors were physically assaulted, arrested, threatened by settlers, and received anonymous death threats.[6] In October, three out of four organizations were forced to temporarily pull out of some areas of H2. These attacks were compounded by restrictions on movement imposed by Israeli security forces.[7]

Some actions by the Israeli authorities during the last quarter of 2015, in the context of the escalation in attacks and violence, impacted on the ability of health workers to provide care to those in need.[8] These included the forcible entry of Israeli police forces on two occasions to the Al Makassed hospital in East Jerusalem, and the entry of undercover Israeli forces into Al Ahli hospital in Hebron, which resulted in the fatal shooting of a Palestinian man. The placing of checkpoints, particularly in Hebron city and East Jerusalem, also impeded the access of patients, ambulances and medical staff to hospitals.[9] Between 2 October and 27 December, the Palestinian Red Crescent Society (PRCS) recorded 333 incidents involving: attacks on its staff and paramedics (147); damage to its property (93); and delays of ambulances (93).

[2] As of March 2016, 78 of the 82 hospitals and health centres affected have been reconstructed or repaired, and works on 243 of 259 schools damaged or destroyed have been completed. UNSCO, Report to the Ad Hoc Liaison Committee, 19 April 2016. para. 54

[9] On 4 October, PRCS declared a state of emergency following 14 attacks by Israeli forces and settlers against its ambulances and staff.