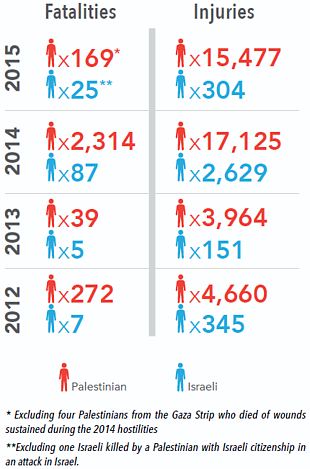 Palestinian civilians across the oPt continued to be subjected to threats to their lives, physical safety and liberty from conflict-related violence, and from policies and practices related to the Israeli occupation, including settler violence. While most of 2015 witnessed a relative calm compared to 2014, tension rose in September in East Jerusalem, with protests, clashes and violence spreading to the remaining oPt, including to the Access Restricted Areas (ARA) in Gaza, and Israel in October. Due to the upsurge in violence in the last quarter, 2015 recorded the highest number of casualties among West Bank Palestinians since 2005. Israeli casualties in the West Bank and Israel, among both Israeli forces and civilians, were also the highest since 2005. In Gaza, the August 2014 ceasefire has largely held, as reflected in the relatively low number of fatalities, although casualties also rose in the final quarter of the year, along with the escalation in the West Bank.

Among the main concerns during 2015 were the Palestinian attacks on Israelis and the response of Israeli forces, including possible instances of excessive use of force. These concerns were compounded by the continuing chronic lack of accountability and effective remedy for the killing of Palestinians, including as a result of settler violence, as well as regarding the majority of alleged violations of international law, by all parties to the 2014 hostilities. Accountability is essential to ensure justice for the victims and to prevent future violations. 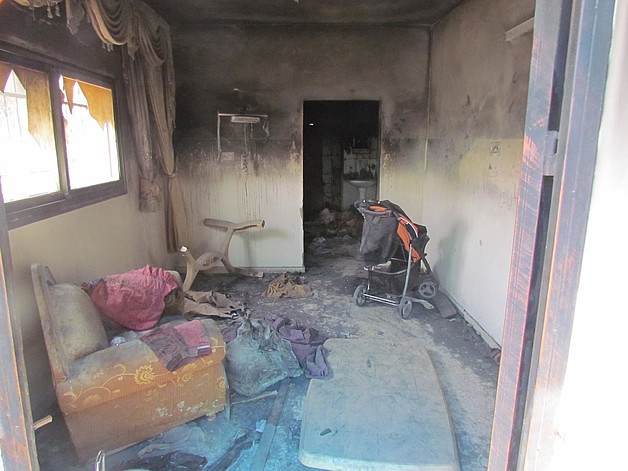 “Sadly, 2016 has begun much like 2015 ended – with unacceptable levels of violence and a polarized public discourse across the spectrum in Israel and the occupied Palestinian territory.” 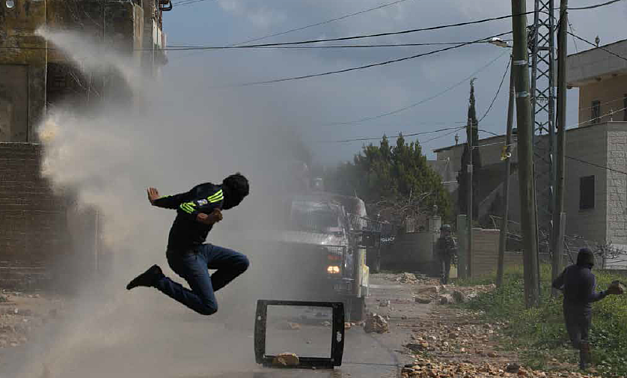 The August 2014 ceasefire, which ended the deadliest escalation in hostilities since the beginning of the Israeli occupation in 1967, has largely held: the number of fatalities 24 (excluding four Palestinians who died of wounds sustained during the 2014 hostilities) is the second-lowest recorded since the outbreak of the Second Intifada in 2000. However, protests along the Gaza perimeter fence in the context of rising tensions in the West Bank resulted in a relatively large number of casualties in the last quarter of the year. Explosive Remnants of War also continue to threaten the life and physical integrity of Gaza residents. Although some Palestinian armed groups have not adhered to the ceasefire understanding, there was a sharp decrease in rockets fired from Gaza towards Israel throughout the year (26 in total) and of Israeli airstrikes in Gaza.[2] 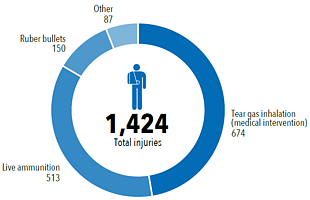 Palestinian protests in the context of escalating tensions in the West Bank, accounted for the majority of casualties in Gaza, with nine of the 24 fatalities recorded on 9 and 10 October when Israeli forces fired at protestors at two locations near the perimeter fence, leading to concerns of “unwarranted use of live ammunition against demonstrators.”[3] Three of the fatalities in 2015 were children (two boys and a girl), one was a woman, and the rest were men. Overall, of the 1,424 Palestinians injured by Israeli forces during the year in the Gaza Strip, 36 per cent were hit by live ammunition, compared to 10 per cent in the West Bank. 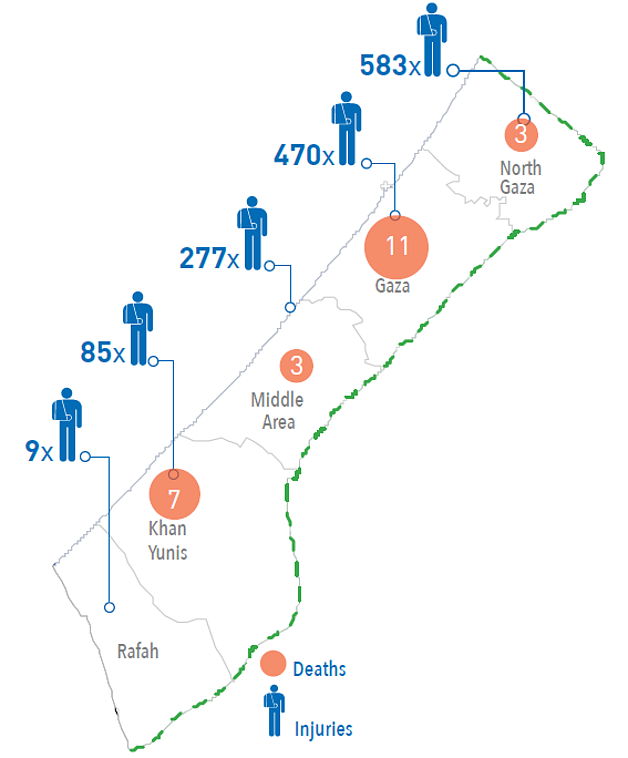 Significant numbers of unexploded ordnance (UXO) from the 2014 hostilities, including ERW from Hamas and other armed groups, are dispersed across Gaza, and continued to pose a serious threat to the life and physical integrity of the population in 2015. 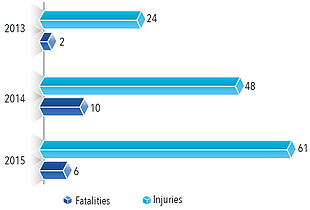 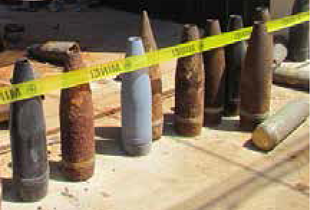 * Casualties from ERW are not included in the totals mentioned elsewhere in this section.

Israel continued to enforce a buffer zone by land, including through the firing of live ammunition, citing concerns about the firing of rockets and the digging of tunnels. Fishermen also continued to be affected by shooting and confiscation incidents in the context of the enforcement of access restrictions at sea by the Israeli Navy. 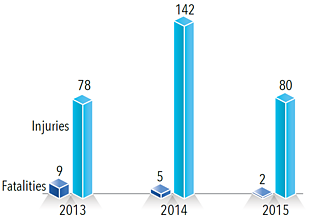 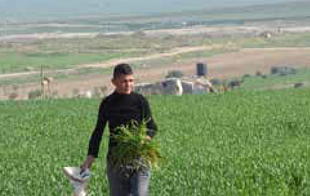 Lack of accountability for violations arising from the 2014 hostilities

In June 2015, the United Nations Independent Commission of Inquiry on the 2014 Gaza conflict issued its findings and recommendations, noting that information gathered pointed to the possible commission of war crimes by Israel and by Hamas and other armed groups, in addition to serious violations of international humanitarian and human rights law by all parties.

On August 2015, the Palestinian Government established an Independent National Commission to monitor the implementation of the recommendations, but so far, no information has been released regarding its findings. Additionally, while the Gaza Ministry of Interior reportedly launched an investigation on the summary executions of alleged collaborators during the 2014 hostilities, no further information has been made available.

On the Israeli side, the latest update issued by the Military Advocate General in June 2015 indicates that he has ordered the opening of criminal investigations into 22 cases of alleged violations by Israeli soldiers, which resulted so far in one criminal indictment issued for a case of looting.

In a report issued in March 2016, the High Commissioner for Human Rights expressed serious concern about the lack of implementation of these recommendations by all sides, including those related to the investigation of alleged violations and the prosecution of perpetrators.

While most of 2015 witnessed a relative calm compared to 2014, tension rose in September in East Jerusalem, initially centring on the Al Haram al Sharif / Temple Mount, with protests, clashes and violence spreading to the remaining oPt. The last quarter of 2015 was marked by a sharp rise in stabbing, ramming, and shooting attacks by unaffiliated Palestinians against Israeli civilians and forces, and widespread clashes. As a consequence, 2015 recorded the highest number of casualties among West Bank Palestinians since 2005, when OCHA began documenting incidents. There was also a sharp increase in incidents raising concern about excessive use of force and arbitrary deprivation of life, both in the context of clashes and in response to Palestinian attacks, including multiple cases where perpetrators and alleged perpetrators were shot and killed on the spot by Israeli forces.[4] 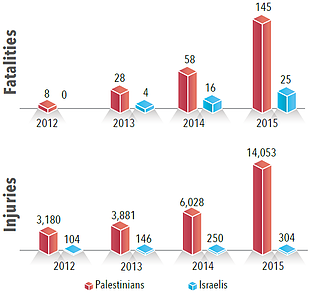 Most Palestinian fatalities in the West Bank, including East Jerusalem, and Israel (93 of 145) were suspected perpetrators of attacks or alleged attacks on Israelis.[5] The absolute majority of Palestinian injuries occurred during clashes and resulted mainly from tear gas inhalation requiring medical treatment (60 per cent); rubber bullets (26 per cent); and from live ammunition shot by Israeli forces (10 per cent). Thirty children were killed by Israeli forces and settlers during the year in the West Bank and Israel, the highest number recorded since 2006. Of these, 20 children, including four girls, were involved in attacks and alleged attacks. 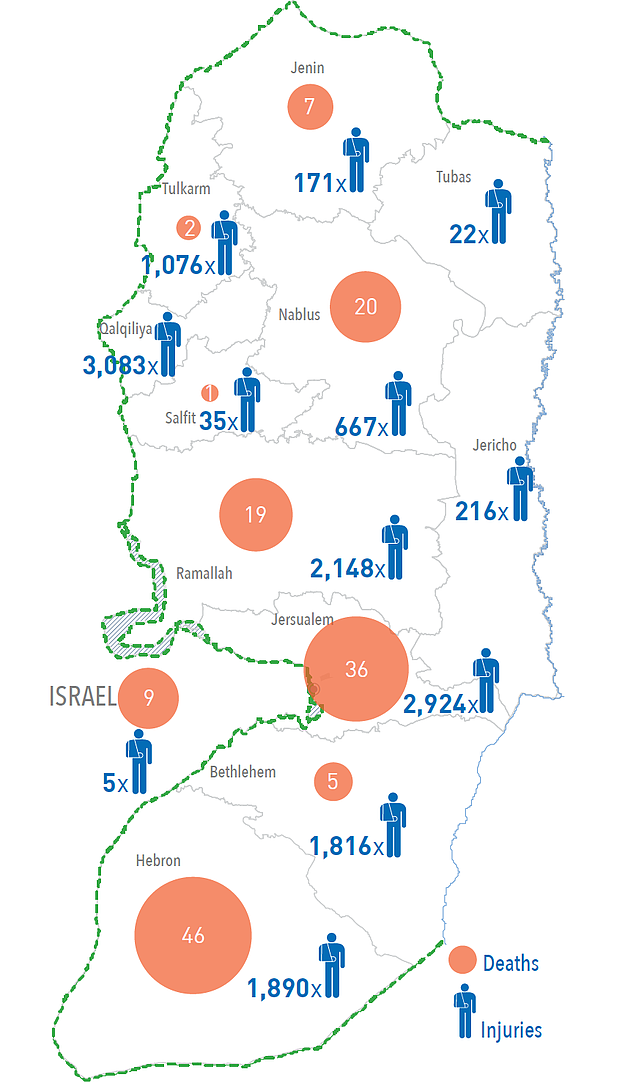 Israeli fatalities by type of attack 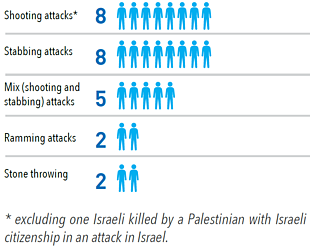 Twenty-three civilians and two members of Israeli forces were killed in 2015 in attacks by suspected Palestinians,[6] including 21 in the West Bank, and four in Israel.[7] This was the highest number of Israeli fatalities by West Bank Palestinians since 2005, when OCHA began recording such incidents. Of the Israeli civilians, two were women. Such attacks have been unreservedly condemned by the UN Secretary-General: “There can never be any justification for stabbings, vehicle attacks, shootings, incitements to violence, or the glorification of killers.”[8]

The number of settler violence incidents resulting in Palestinian casualties or damage to property declined in 2015 compared to 2014. The most serious incident entailed an arson attack that led to the burning to death of three members of a Palestinian family. The number of damaged, stolen or uprooted trees in 2015 was the highest since 2006. 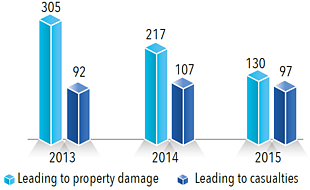 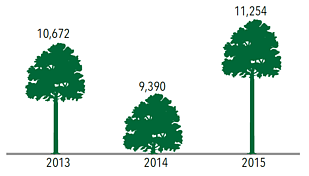 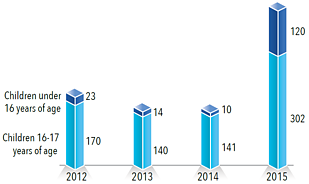 As of the end of 2015 there were over 6,000 Palestinians held by the Israeli Prison Service on ‘security’ grounds, the highest such figure since 2010.[9] The number of children among them, 422, was also the highest since August 2008, when this indicator began to be tracked, including six held in administrative detention, without charge.[10] Some 80 per cent of the Palestinian children imprisoned were in pre-trial detention, the majority facing stone-throwing charges.[11]

Insufficient accountability for violations arising from the Israeli forces in their policing capacity in the West Bank continued. In 2015, 21 criminal investigations were reportedly opened into cases involving the killing of Palestinians by Israeli forces. As of the end of 2015, results for all investigations remained pending. In the whole of 2015, there were two indictments against members of Israeli forces, both relating to cases involving the killing of Palestinians in 2013 and 2014. Measures adopted by the Israeli authorities, particularly following the fatal arson attack on three members of a Palestinian family, appear to have contributed to the decline in incidents of settler violence during the year. Gaps in law enforcement remain: from 2005 to 2015, 7.3% of a sample of 1,014 investigation files related to complaints about settler attacks against Palestinians and their property in the West Bank monitored by the Israeli organization Yesh Din led to an indictment. Figures issued by the Israeli Ministry of Justice suggest that the rate of indictment between 2013 and 2015 was significantly higher.[12]

[1] OCHA Protection of Civilians database does not include incidents which did not involve residents of the oPt either as victims or perpetrators.

[2] According to the Israeli Security Agency, 26 rockets and three mortars were fired from Gaza into Israel in 2015.

[3] Report of the United Nations High Commissioner for Human Rights on the implementation of Human Rights Council resolutions S-9/1 and S-12/1, A/HRC/31/40, 20 January 2016, para. 22. “Shots appeared to have been fired at the upper body and heads of protesters, although witnesses say that there was no imminent threat to life or serious injury to soldiers who were positioned in towers, armoured vehicles or behind dirt-mounds, on the other side of the fence.” Ibid. “Reportedly, IDF subsequently shifted its practice to use more tear gas, warning shots and shots to the legs. Nonetheless, unwarranted use of live ammunition continued, including in at least five incidents documented by OHCHR where peaceful protesters carrying Palestinian flags were shot and wounded.” Ibid., Para. 24.

[12] The MoJ figures do not disaggregate cases of “ideologically motivated offenses” against Palestinians from those directed at Israeli forces, therefore they are not comparable with Yesh Din’s figures. See: Ministry of Justice, Israel’s Investigation and Prosecution of Ideologically Motivated Offences Against Palestinians in the West Bank, February 2016.