In the Gaza Strip, recurrent conflict and the ensuing damage and destruction of educational facilities have led to disruption in services and impacted the psychosocial well-being of children and teachers. Two years after the end of the most recent escalation in 2014, all 252 damaged schools have been repaired, but reconstruction of six of the seven totally destroyed schools is still incomplete. Nine years of blockade have compounded the impact of hostilities. Schools are overcrowded and their facilities are often used in double shifts, resulting in fewer instructional hours on core subjects and foundational learning, student difficulties in focusing on their studies and heightened levels of violence in schools. At least 20 new schools need to be built in Gaza each year to keep pace with population growth, but only 20 new schools have been built over the past eight years (all in 2013). 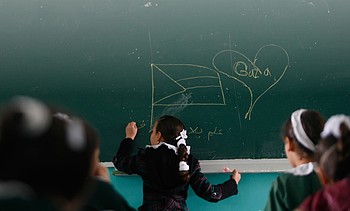 Student performance and motivation are also undermined by the wider Gaza context of continuous power outages and electricity rationing, poor shelter and living conditions, and economic deprivation. Learning outcomes and completion rates for students continue to decline; student performance in Gaza is falling behind that of the West Bank. The average pass rate on the unified grade four exams was only 55 per cent in Arabic language and 51 per cent in mathematics in 2012; less than half of the students taking the grade seven exams passed any single subject.

The educational system in Gaza is also negatively impacted by the failure of the Government of National Consensus (GNC) to effect intra-Palestinian reconciliation. In the aftermath of the Hamas takeover of Gaza in 2007, tens of thousands of civil servants paid by the Palestinian Authority (PA) in Ramallah were either forced by the PA to stop working or were replaced by civil servants recruited by the Gaza authorities. Hundreds of government projects in Gaza were halted and the PA’s budget lines for Gaza branches of ministries, including the Ministry of Education and Higher Education (MoEHE), were cut. Over 6,000 teachers have not received regular monthly salaries since April 2014, of whom approximately 1,100 face the prospect of ceasing work if their salaries are not paid or their transportation fees are not covered.

For the third consecutive academic year, the MoEHE in Gaza has not received an operational budget from Ramallah and will rely for operating costs on the revenues from school canteens (approximately $1,000 per year per school). The Ministry also needs critical funding to provide children with school bags, uniforms and stationery; to furnish new schools and replace furniture; to provide drinking water; and to equip 20 computer and 50 science laboratories at a total cost of approximately $15 million. These needs exacerbate the educational situation.