Over 300 Palestinians have been injured by live ammunition in 2016. Serious concerns persist about lack of accountability for alleged violations of international law, including allegations of war crimes. Gaza Student performance undermined by poor shelter and living conditions and economic deprivation. The Ministry of Education in Gaza needs $15 million to furnish new schools. The provision of basic services in Gaza severely hampered by the longstanding electricity deficit. 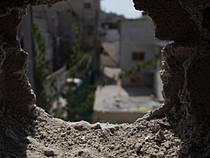 During the third week of September, the number of Palestinian attacks and alleged attacks against Israelis was the highest recorded since the escalation in the last quarter of 2015. In all, seven suspected Palestinian perpetrators were killed on the spot, including two children, and eight Israelis were injured.

During July and August, nine Palestinians were killed in the West Bank by Israeli forces, mainly in clashes during search and arrest operations (four cases), or during Palestinian attacks and alleged attacks (three cases). Those killed included a 27-year-old pregnant woman shot dead in the H2 area of Hebron city, after allegedly trying to stab a border policeman; a twelve-year-old child hit by a rubber bullet fired by Israeli soldiers during clashes with Palestinian stone throwers in Ar Ram town (Jerusalem); and a 38-year-old man with mental health problems who failed to respond to orders to stop and was shot while walking near a military tower at the western entrance of Silwad.

Gaza two years on: Less than nine per cent of referred incidents have led to a criminal investigation 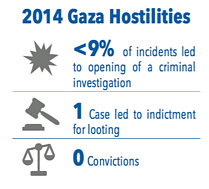 Two years after the 2014 escalation of hostilities, justice remains elusive. Serious concerns persist regarding the lack of investigations and accountability by both the Israeli and Palestinian authorities into alleged violations of international humanitarian law and international human rights law, including allegations of war crimes, as well as lack of civil remedies and compensation to victims.

In the Gaza Strip, recurrent conflict and the ensuing damage and destruction of educational facilities have led to disruption in services and impacted the psychosocial well-being of children and teachers. Two years after the end of the most recent escalation in 2014, all 252 damaged schools have been repaired, but reconstruction of six of the seven totally destroyed schools is still incomplete. Nine years of blockade have compounded the impact of hostilities. Schools are overcrowded and their facilities are often used in double shifts, resulting in fewer instructional hours on core subjects and foundational learning, student difficulties in focusing on their studies and heightened levels of violence in schools. At least 20 new schools need to be built in Gaza each year to keep pace with population growth, but only 20 new schools have been built over the past eight years (all in 2013). 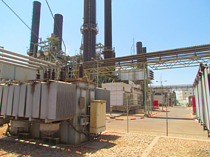 At this month’s meeting of the Ad-Hoc Liaison Committee (AHLC), a high-level, biannual donor meeting, the Israeli authorities announced their intention to establish a new electricity line into the Gaza Strip. The line could supply an extra 100 megawatts (MW) of electricity, almost doubling the current supply from Israel. The announcement did not include an implementation time frame. In the meantime, the provision of basic services across the Gaza Strip remains severely hampered by the longstanding electricity deficit.[1]