Fuel for the Gaza Power Plant (GPP) was made available following the provision of funding by the government of Qatar, and also by Israel lifting restrictions imposed on the entry of fuel in October in response to a reported increase in violence during the ‘Great March of Return’ demonstrations and clashes. Based on the Qatari funding available, the current levels of operation of the GPP are expected to last through April 2019. 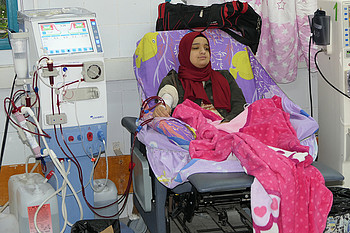 The electricity crisis experienced in Gaza over the past decade was aggravated in mid-2017 by measures adopted by the Fatah-led Palestinian Authority in the internal political rift with the Hamas authorities. These measures included cuts in funding for electricity supplied by Israel (between July and December 2017) and for the purchase of fuel to operate the GPP. The situation was compounded by an almost total halt in the supply of electricity from Egypt due to the malfunctioning and inability to repair the relevant feeder lines. In previous years, GPP operation was also undermined when the smuggling of Egyptian-subsidized fuel through tunnels after 2013 came to an end; the limited collection of payments from consumers; the destruction of fuel storage tanks by an Israeli airstrike in July 2014; and restrictions on imports of spare parts, equipment and fuel under the Israeli blockade.

The recent boost in the electricity supply has led to a general improvement in otherwise deteriorated living conditions in Gaza. Expenditure by households and businesses on fuel to operate back-up generators has been reduced and the delivery of basic services, water and sanitation in particular, has improved. It has also reduced the need, at least temporarily, for emergency fuel supplies provided by the UN to avert the collapse of basic services.

The increased electricity supply through the grid has had a positive impact on the operation of 280 domestic water wells, 32 water reservoirs relying on booster stations and 2,800 km of water networks. Water production has increased by over 40 per cent (from 140,000 to 200,000 cubic metres a day) and the frequency of the water supply has been boosted, with households receiving water for cycles lasting about eight hours every one to three days.

Given that most piped water is unfit for human consumption, approximately 90 per cent of households in Gaza rely on water purchased from desalination/purification plants across Gaza for drinking and cooking, with piped water used for other domestic purposes. The recent improvement in the electricity supply has increased the volume of water produced by these plants, most of which are operated by the private sector. In the case of the 48 publicly-owned desalination plants operated by the Coastal Municipalities Water Utility (CMWU), the reported increase in production reached over 20 per cent. Desalinated/purified water purchased in containers or tanks is 10-30 times more expensive than piped water and is a heavy burden on already impoverished families.[1] Despite the increased availability of desalinated water, no reductions in prices have been reported.

The longstanding electricity deficit, combined with the shortage of adequate sanitation infrastructure, has resulted in the discharge of 100-108 million litres of poorly treated sewage into the sea every day. [2] This poses serious health and environmental hazards for marine life, the quality of fish consumed in Gaza and for swimming, one of the few recreational activities available to the local population.

The electricity shortage and the hazardous condition of the wastewater treatment plants poses a constant threat of sewage flooding in areas adjacent to reservoirs and pumping stations. This threat materialized on 4 May 2016 when one of the retention walls of a sewage lagoon in Gaza City’s treatment plant (Sheikh Ejleen) collapsed following a prolonged power cut, releasing 15,000 cubic metres of raw sewage into a nearby farming area.

The boost in the electricity supply has improved the operation of the five wastewater treatment plants, reducing the level of contamination of the sewage discharged into the sea, and the risk of overflow and flooding.[3] 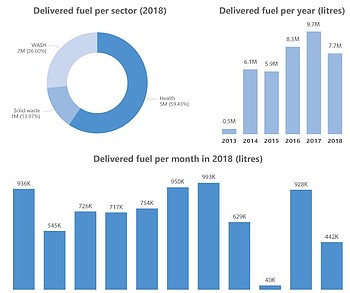 Supported by donors, the UN has been coordinating the delivery of emergency fuel to run back-up generators in the Gaza Strip since 2013. This has ensured that a minimal level of lifesaving health, water and sanitation services have been maintained despite the severe energy crisis. The number of critical facilities requiring fuel support increased from 189 in April 2017 to 249 at present.

The list of facilities is revised on a monthly basis by the relevant clusters and OCHA on the basis of the availability of electricity, and changing needs and priorities.

Owing to the increased availability of electricity in November 2018, the need for emergency fuel declined, and the amounts distributed during the month have been reduced. Despite this positive development, as of the time of writing, funding available to maintain the emergency fuel mechanism has been almost exhausted; unless additional contributions are provided distributions are expected to halt by mid-December.

OCHA  developed a dynamic, user-friendly dashboard, available online, to enable stakeholders to monitor the electricity supply and the emergency fuel programme, and to identify gaps easily.

[1] For further information about the contamination of the Gaza aquifer and related health hazards, see OCHA Humanitarian Bulletin, October 2018.

[3] In April 2018 a large modern plant (North Gaza Emergency Sewage Treatment), under construction for a decade, came into operation with a maximum capacity of 35,600 cubic metres per day. Unlike other plants, it benefits from a dedicated electricity line from Israel that allows it to operate almost continuously.