Relative quiet returns to Gaza after serious escalation of hostilities in November. Significant increase in the supply of water in Gaza following increase in electricity supply from previous 5 to 16-18 hours a day. Food insecurity in Gaza affects 68% of households; unemployment at all-time high of nearly 55%. Increase in incidents by Israeli soldiers and settlers at Palestinian schools disrupts access to education in West Bank.

The period between 11 and 13 November witnessed one of the most serious rounds of hostilities in Gaza and southern Israel since the 2014 escalation. It resulted in the killing of 15 Palestinians, including at least three civilians (one of them by Palestinian rocket fire), and one Israeli soldier; dozens of homes in Gaza and southern Israel were destroyed or damaged, displacing at least 33 Palestinian and 15 Israeli families. An informal ceasefire was reached on 13 November, with the support of Egypt and the UN, which is still holding.

Over 68 per cent of households in the Gaza Strip, or about 1.3 million people, are severely or moderately food insecure, according to the preliminary findings of the latest Socio-Economic and Food Security Survey (SefSec) carried out in 2018. 4 This is despite the fact that 69 per cent of households in Gaza reported in the survey that they receive some form of food assistance or other forms of social transfers from Palestinian governmental bodies or international organizations. The current food insecurity rate in Gaza constitutes a rise of 9 percentage points from the equivalent figure for 2014 (59 per cent), the last time the SefSec was conducted. By contrast, food insecurity in the West Bank stands at nearly 12 per cent of households according to the same survey, down from 15 per cent in 2014.

Rise in incidents disrupting schooling across the West Bank 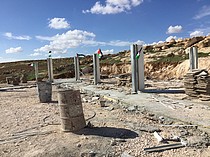 This school year (since August 2018), the Education Cluster has observed an upward trend in the number of incidents involving Israeli forces and/or settlers reported as taking place in or near Palestinian schools in the West Bank and that disrupt access to and activities at these schools. Incidents recorded include delays and harassment of children travelling to school, at checkpoints and elsewhere; clashes in the vicinity of schools; and violent raids and search operations inside schools.