Preparations for a new Israeli settlement in a strategic location along Road 60 (the main north-south traffic artery in the West Bank) next to Al Arroub refugee camp in the northern part of Hebron governorate, have been ongoing for the past year, triggering a number of humanitarian concerns. The establishment or expansion of settlements in the occupied West Bank is illegal under international law and has become a main driver of vulnerability for the Palestinian population, generating the need for protection and assistance measures by humanitarian actors.

According to an Israeli media report, in 2012 a settler organization secretly purchased a property in this location from a Swedish Christian shell organization that had purchased it a few years earlier from a Presbyterian church. The property is known as “Beit al Baraka” and consists of eight buildings on some 40 dunums of land. Over the past year the organization has carried out extensive renovation works on the property.[i] In October 2015, the Israeli Defense Minister approved the amendment of the boundaries of the Gush Etzion settlement Regional Council to include the Beit al Baraka compound. Although the buildings can reportedly house dozens of families, it is currently unclear whether the new settlement will serve residential or touristic purposes.[ii]

Al Arroub camp has long been a flashpoint for confrontations with Israeli forces, which are positioned in and around a military watchtower near the entrance to the camp. There have also been recurrent incidents in the past few years of stone-throwing by Palestinian youths at Israeli vehicles travelling on Road 60. In 2015, UNRWA recorded 115 search and arrest operations and 53 violent confrontations, resulting in one fatality and 35 injuries among Palestine refugees. Since October 2015, the Gush Etzion roundabout to the north of the camp has been the site of multiple Palestinian stabbing, ramming and shooting attacks against Israeli soldiers and settlers. The establishment of a new settlement in the immediate vicinity of the camp and the junction is likely to increase the existing high levels of tension and violence.

The population and/or operation of the settlement on a permanent basis is likely to result in the adoption of security measures, including restrictions on Palestinian access. The area surrounding Beit al Baraka is privately owned by farmers from Beit Ummar village and is intensively cultivated with olives, grapes, almonds, apples and seasonal vegetables. Based on common practice in other settlements, farmers have expressed concern about the possible installation of additional fences around the property and the imposition of restrictions impairing access to the area. This is in addition to pre-existing concerns related to the paving of an alternative by-pass road to the section of Road 60 passing next to Al Arroub camp that may involve the expropriation of land and uprooting of trees.[iii]

Additionally, on 14 January 2016, the Israeli authorities demolished two barracks belonging to refugees from Al Arroub camp, previously used as chicken coops, on the grounds that they lacked an Israeli building permit. Two days later, the authorities demolished a concrete wall and a water cistern on the same grounds, and bulldozed a nearby plot of land, uprooting 85 olive, almond and grape trees. These incidents have triggered concerns about the potential demolition of existing structures and crops with outstanding demolition or evacuation orders following the opening of the settlement.

A Palestinian refugee family of seven has lived in one of the compound’s structures for about 40 years under an informal understanding with the Presbyterian church, which employed the head of household in the compound. Over the past few months, the family has been under pressure from the Swedish organization to vacate the building. On 6 February 2016, three family members (all adult siblings) were prevented by Israeli soldiers from entering their home unless they signed several documents related to their eviction, which they refused to do. The soldiers also carried out a search of the house. To date, two of the individuals are still denied access to the compound, while the remaining five family members continue to reside on the site. They live in a very tense environment due the outstanding threat of eviction and the access gate being under the control of private security guards. The family recently petitioned the Israeli Supreme Court against their eviction and obtained a temporary injunction until a court decision is issued on their case. 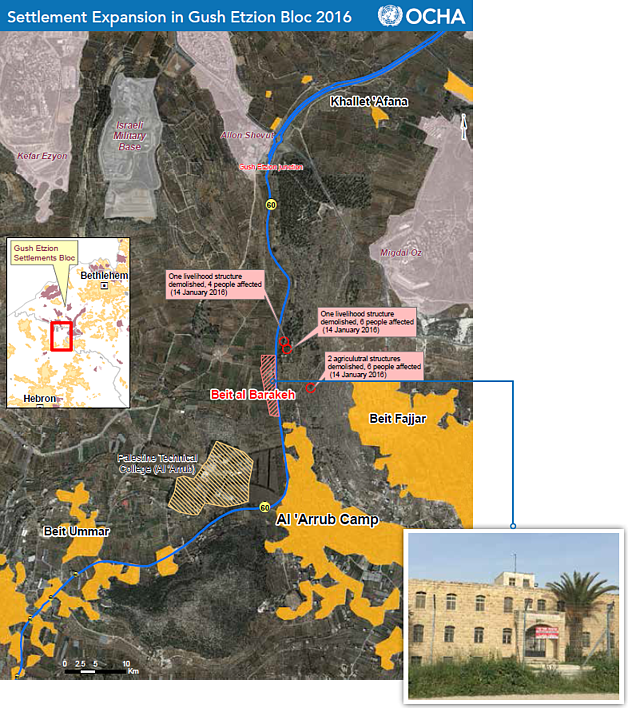