as part of
The Monthly Humanitarian Bulletin | November 2015

Following a decision adopted on 14 October 2015 by the Israeli Security Cabinet to address the wave of violence, Israeli forces began to block some of the main routes to and from Palestinian neighbourhoods in East Jerusalem. Within a week, a total of 41 obstacles had been deployed, comprising 23 cement blocks, one earth mound and 17 checkpoints.

These restrictions directly impacted the freedom of movement of nine Palestinian neighbourhoods, with an estimated population of 138,000, or over 40 per cent of East Jerusalem’s Palestinian population. This figure does not include residents of municipal areas located behind the Barrier who must cross pre-existing checkpoints to access other parts of Jerusalem.

Search and checking procedures at the newly deployed checkpoints, mostly staffed by the Israeli border police, have resulted in long queues that have delayed and disrupted the access of people to services, including educational and health facilities, places of work and holy sites.

During November the Israeli authorities gradually began the removal of most of the obstacles. Currently a total of 14 obstacles remain, including six checkpoints, seven roadblocks, and an earth mound, directly affecting some 76,000 people residing in six neighbourhoods.[1]

Despite the overall easing during November, in some neighbourhoods most closure obstacles have remained in place, severely disrupting the daily life of the entire population.

In Ras al Amud, where some 25,000 Palestinians live, three of four obstacles (including two checkpoints and one roadblock) continue impeding access to schools and basic services.[2] Around 5,000 kindergarten and school students and their parents cross these obstacles on a daily basis: according to community sources, these people have to queue for long periods of time, and are subject to physical, vehicle and school bags searches. Six schools in Ras Al ‘Amud have been particularly impacted by police raids and tear gas canisters, sound grenades and skunk water falling in their yards. Ad-hoc closures of the new checkpoints have repeatedly obstructed access and created serious traffic jams. The elderly, sick and disabled have been disproportionately affected.

In Al Issawiya, home to approximately 15,000 people, all seven routes connecting this neighbourhood with the rest of the city and to adjacent agricultural land were blocked, and all traffic to and from this area directed to a single road controlled by a checkpoint.

Particularly affected have been chronic patients and urgent medical cases, as travel time to the adjacent Hadassa hospital increased from 5-10 minutes to up to an hour. On 19 October, a 65-year-old woman died on her way to hospital, after suffering from tear gas inhalation during clashes taking place in the neighbourhood; she was delayed for about 25 minutes at the newly established checkpoint. Also impacted are over 2,000 children and youths attending schools and universities outside the neighborhood.

The erection of a military checkpoint next to Augusta Victoria Hospital between 9 October and 1 November entailed extensive physical searches and caused long delays. It had a negative impact on the functioning of the hospital by delaying access to staff and patients, including medical referrals to and from Makassed hospital nearby.

During this period, the hospital recorded a 30-40 per cent drop in visits to its outpatient clinics, which provides services unavailable at other hospitals, including pediatric dialysis, radiation therapy and chemotherapy. Some of the 30 patients from Gaza receiving radiation and chemotherapy, accommodated in a nearby facility, reported being turned back from this checkpoint.

Additionally, the Israeli company contracted to collect medical waste suspended its operations citing security concerns. The resulting accumulation of medical waste in the hospital posed a health and environmental hazard for the entire neighbourhood.[3] 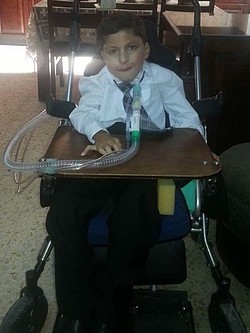 Taha Al Ju’beh, eight-year-old, from Al Issawiya, suffers from muscle atrophy and depends on an electric wheelchair and a respirator; the latter is powered by a battery that lasts for slightly more than an hour. As a result of the closures, the travel time to the school in West Jerusalem, where he receives treatment on a daily basis, nearly doubled: from one to two hours. This has required him to rely on an extra-battery to be changed during the journey.

[2] Population figures are as of end of 2013, Jerusalem Institute for Israel Studies. One of the roadblocks was installed in June 2015, prior to the start of the current escalation.

[3] On 26 October, Augusta Victoria Hospital made an arrangement with the company to have the chemical waste transferred from hospital trucks to the company’s trucks near Hadassah hospital in Mount Scopus in East Jerusalem (back-to-back transport), a one-time arrangement which allowed the hospital to dispose of the medical waste that had piled up for two weeks between 10 and 26 October.