Over 13,000 Palestinians injured since the start of the Gaza demonstrations, exceeding the number of injuries during the 2014 hostilities, and further straining the already limited capacity of Gaza’s health system. The continuation of food assistance programmes targeting over 1.2 million poor Palestinians in the Gaza Strip during the second half of 2018 is at risk due to severe funding shortfalls. 84 settler attacks resulting in Palestinian casualties or property damage in the first four months of 2018, the highest such figure since 2014. Palestinian Bedouin community in the outskirts of East Jerusalem, in Area C of the West Bank, at heightened risk of forcible transfer, following a final ruling by the Israeli Supreme Court. 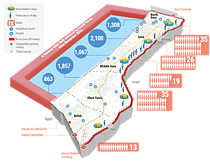 The humanitarian situation in the Gaza Strip continues to deteriorate. Gaza has been tense since 30 March, with Palestinians holding weekly demonstrations along Israel’s perimeter fence as part of the ‘Great March of Return’. As of 31 May, Israeli forces had killed 128 Palestinians, the vast majority during the demonstrations, and injured over 13,000, including more than 3,600 by live ammunition, raising serious concerns about excessive use of force. 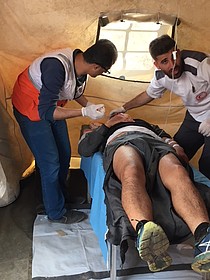 In the wake of the ‘Great March of Return’ demonstrations since 30 March, Gaza’s already overstretched health sector has been struggling to cope with the mass influx of casualties. This burden has exacerbated the long-term shortage of medicines and limited capacities of health facilities, driven by the huge electricity deficit and the ongoing salary crisis affecting government employees, among other reasons.

53 per cent of Palestinians in Gaza live in poverty, despite humanitarian assistance

The findings of a Household Expenditure and Consumption Survey, released by the Palestinian Central Bureau of Statistics (PCBS) in May, show a significant increase in poverty rates in the Gaza Strip: from 38.8 per cent in 2011 (the previous time poverty was measured) to 53 per cent by the end of 2017, which is the equivalent to around 1.01 million people, including over 400,000 children.6 This means that poverty increased by more than 14 percentage points in a period of six years.

Humanitarian impact of settlements in Palestinian neighbourhoods in East Jerusalem: evictions and displacements 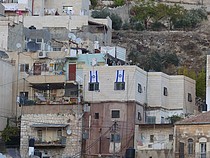 In recent decades, Israeli settler organizations, with the support of the Israeli authorities, have taken control of properties within Palestinian neighbourhoods in East Jerusalem, and established a number of settlement compounds there. The majority of cases have been challenged unsuccessfully in Israeli courts. Settlements are illegal under international law.

Increase in settler violence during the first four months of 2018 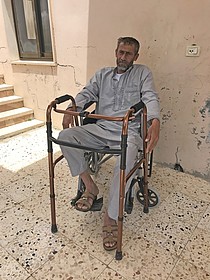 Israeli settler violence against Palestinians has been on the rise since the beginning of 2017. Between January and April 2018, OCHA documented 84 incidents attributed to Israeli settlers resulting in Palestinian casualties (27 incidents) or in damage to Palestinian property (57 incidents). On a monthly average, this is the highest level of incidents recorded since the end of 2014 and represents a 50 and 162 per cent increase compared with 2017 and 2016, respectively (see chart). Israeli security officials have expressed concern over this trend and reportedly increased their presence in ‘friction areas’, particularly near the settlement of Yitzhar, in the northern West Bank.