The humanitarian situation in the Gaza Strip continues to deteriorate. Gaza has been tense since 30 March, with Palestinians holding weekly demonstrations along Israel’s perimeter fence as part of the ‘Great March of Return’. As of 31 May, Israeli forces had killed 128 Palestinians, the vast majority during the demonstrations, and injured over 13,000, including more than 3,600 by live ammunition, raising serious concerns about excessive use of force.

The enormous volume of injuries already exceeds the number of injuries during the 2014 hostilities.  On 23 May, following a visit to health facilities in Gaza, the UNRWA Commissioner-General Pierre Krähenbühl declared: “I truly believe that much of the world completely underestimates the extent of the disaster in human terms that occurred in the Gaza Strip since the marches began on 30 March […] I was also struck not only by the number of injured but also by the nature of the injuries [...] The pattern of small entry wounds and large exit wounds, indicates ammunition used caused severe damage to internal organs, muscle tissue and bones.”

The main article in this month’s bulletin concerns the difficulties that Gaza’s health sector has been experiencing in coping with these injuries. Medical supplies are significantly depleted and access to healthcare for non-trauma patients is being compromised, with non-surgical wards converted to surgical wards to cope with the huge influx of trauma patients. Ministry of Health (MoH) hospitals have needed to suspend all outpatient clinics during the demonstrations and cancel all elective surgery procedures, to deal with the massive influx of wounded. These developments have exacerbated the already fragile situation of the health system in Gaza as a result of over 10 years of blockade, the deepening intra-Palestinian political divide, a deteriorating energy crisis, and inconsistent payment of public sector medical personnel.

The situation was exacerbated by a temporary escalation between 28 and 30 May, the most serious since the 2014 hostilities. Palestinian armed groups in Gaza fired over 200 rockets and mortars at Israel, most of which were intercepted in the air or fell in open areas, resulting in a few Israeli injuries and limited damage, including to a kindergarten. Israeli forces fired tank shells and carried out airstrikes on 65 targets in Gaza, killing four members of armed groups and damaging numerous military sites. Although the current round of violence appears to be over, the flare-up is “a warning to all how close to the brink of war we are every day”, as noted by Special Coordinator Mladenov in his briefing to the Security Council on 30 May.

The rise in violence and casualties is taking place against the backdrop of dire living conditions in Gaza. Another of this Bulletin’s articles highlights a recent survey by the Palestinian Central Bureau of Statistics (PCBS) which reveals that poverty rates in Gaza have increased from 38.8 per cent in 2011 to 53 per cent by the end of 2017, affecting one million people, including over 400,000 children. Poor people are defined as those living on less than US$4.6 per day, which PCBS estimates is the minimum to cover basic household needs, including food, which accounts for almost 35 per cent of household consumption in Gaza.

The United Nations, through UNRWA and World Food Programme (WFP), has significantly increased its food assistance caseload in recent years: UNRWA currently provides food assistance to almost one million refugees in Gaza, and a further 245,000 severely food-insecure non-refugees are targeted by WFP. However, both agencies report severe funding shortfalls: of the $224.8 million requested in the 2018 Humanitarian Response Plan to cover food security needs in the Gaza Strip, only $37.7 million, or 16.7 per cent of the requirement, has been received so far, jeopardizing the continuity of the programmes during the second half of the year.

In the West Bank, two Bulletin items address issues of longstanding concern: Israeli settler violence against Palestinians, which has been on the rise since 2017, and the humanitarian impact of the continuing efforts of Israeli settler organizations to take control of properties within Palestinian neighbourhoods in East Jerusalem.

On the latter issue, a case study addresses the current hardships of the Qirresh family who were evicted from their home in the Old City of Jerusalem in September 2016, following a court ruling. Two families in the Sheikh Jarrah neighbourhood are currently at imminent risk of eviction in the same context.

Also of concern, on 24 May, the Israeli High Court of Justice issued a final ruling on the longstanding case of the Palestinian Bedouin community of Khan Al Ahmar, which paved the way for the demolition of the entire community, including a donor-funded school also serving other Bedouin communities in the area, on grounds of lack of building permits, and the forcible transfer of its residents. This is one of 18 communities located in or next to an area slated in part for the strategic E1 settlement plan. On 30 May, the Israeli authorities approved a planning scheme providing for the construction of 92 new housing units in the Kfar Adumim settlement, immediately adjacent to Khan al Ahmar, which has also petitioned the High Court for the implementation of the outstanding demolition orders against the community.

Mass casualties in the context of demonstrations in the Gaza strip, 30 March - 31 May 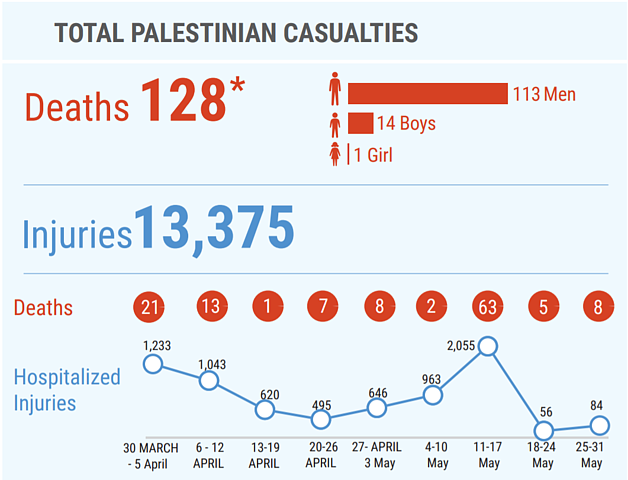 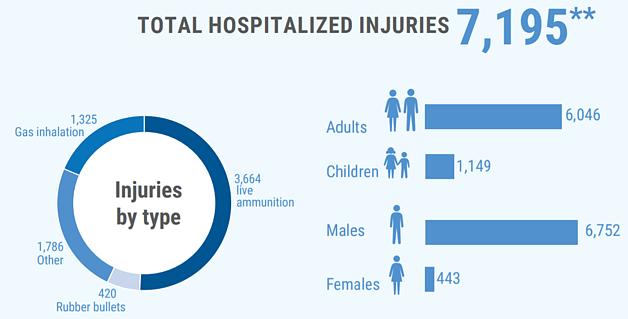 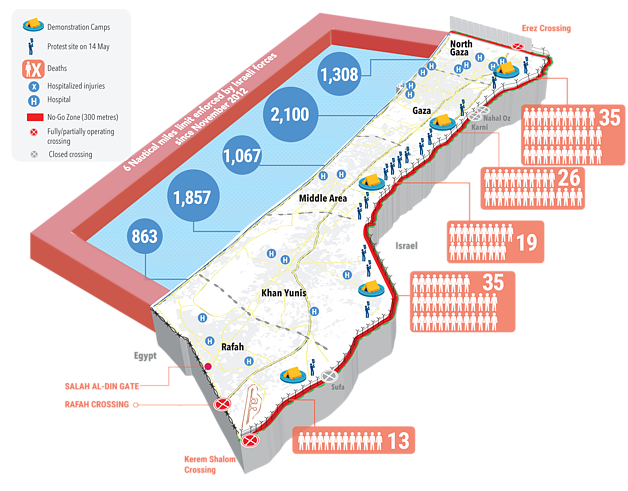