Increase in settler violence during the first four months of 2018

Israeli settler violence against Palestinians has been on the rise since the beginning of 2017. Between January and April 2018, OCHA documented 84 incidents attributed to Israeli settlers resulting in Palestinian casualties (27 incidents) or in damage to Palestinian property (57 incidents). On a monthly average, this is the highest level of incidents recorded since the end of 2014 and represents a 50 and 162 per cent increase compared with 2017 and 2016, respectively (see chart). Israeli security officials have expressed concern over this trend and reportedly increased their presence in ‘friction areas’, particularly near the settlement of Yitzhar, in the northern West Bank.[1]

As in previous years, the Nablus governorate accounted for the highest number of incidents, 35 in total, of which 20 took place in six Palestinian communities surrounding the settlement of Yitzhar and its adjacent outposts. These communities (Burin, Madama, Asira al Qibliya, Urif, Einabous and Huwara), home to over 21,000 people, have been affected for years by settler intimidation and violence, which have undermined their safety and livelihoods. Another significant hotspot was the area surrounding the Havat Ma’on settlement outpost in the Hebron governorate (see case study).

The most frequent types of settler incident during this period involved stone-throwing at Palestinian homes and vehicles (21 incidents); physical assault (18 incidents); vandalizing of trees and other agricultural property (18 incidents); and vandalizing of vehicles and painting of graffiti (13 incidents). On 13 April, Israeli settlers set fire to a mosque in Aqraba village (Nablus), damaging the structure. Overall, incidents during this period led to one Palestinian fatality (killed after reportedly attempting to stab the shooter),[2] 40 Palestinian injuries, including at least ten children, and extensive damage to property, including nearly 900 trees and more than 200 vehicles.

These figures exclude incidents entailing settler raids and other entries into Palestinian communities or private property, which did not result in casualties or damage by the settlers themselves. However, many of these incidents led to the intervention of Israeli forces, which in turn led to clashes with local residents and ended in additional Palestinian casualties.

Between January and April 2018, there have been 28 such settler raids/entries triggering clashes with Israeli forces, which resulted in one Palestinian killed and 277 injured (see chart). All but one of these clashes occurred in communities in the Nablus governorate. On a monthly average, the number of clashes with Israeli forces following settler raids/entries this year increased significantly compared to previous years.

Palestinian attacks on Israeli settlers and other Israeli groups

Since the start of 2018, OCHA (based on Israeli media reports) has recorded a total of 61 Palestinian attacks against Israeli settlers and other Israeli groups in the West Bank, resulting in casualties or damage. On a monthly average, this represents a 57 per cent decrease compared to the same period in 2017 (35 incidents per month). As a result of these attacks, three Israeli settlers were killed, at least 13 were injured, and 41 vehicles were damaged.

A significant percentage of the settler attacks recorded in the northern West Bank were reportedly carried out in retaliation for two of these killings: a shooting attack on 9 January near Yitzhar settlement, and a stabbing on 5 February next to a bus station near Ariel settlement (Salfit). Moreover, according to media reports, the burning of the mosque in Aqraba village was in retaliation for the third killing, perpetrated on 18 March in East Jerusalem by a resident of this village.[3]

Other settler incidents during this period, primarily those involving car vandalizing accompanied by the spraying of offensive graffiti, have been attributed by some media reports to a practice known as “price tag”, aimed at exacting a price from Palestinians for the removal, by the Israeli authorities, of structures in settlement outposts. Since the beginning of 2018, a number of such removals and evictions were reported in small settlement outposts associated with radicalized settler youths in the Nablus governorate.[4]

As the occupying power, Israel has the obligation to protect Palestinian civilians from all acts or threats of violence, including by Israeli settlers, and ensure that attacks are investigated effectively and perpetrators held accountable. The existence of gaps in this regard has been a longstanding concern of the humanitarian community in the oPt.

In a report issued in June 2017, the Israeli Ministry of Justice (MoJ) outlined a series of measures adopted by the Israeli authorities in recent years that have contributed to a reduction in settler violence and higher levels of accountability. These measures include the establishment of the Nationalistic Motivated Crimes Unit within the Judea and Samaria police district in 2013; the use of “restraining orders” against settlers suspected of planning attacks, that prohibit entry to the West Bank or entail detention under administrative orders; and the implementation of special security arrangements in “areas of friction” during the olive harvest season. In addition, according to the MoJ, there has been a gradual increase in the percentage of cases of settler violence leading to the prosecution of suspected perpetrators: from 19 per cent of cases investigated in 2013 to nearly 30 per cent in 2015.[5]

A recent report by the Israeli human rights organization Yesh Din appears to confirm, albeit to a much smaller extent, the increasing rate of indictment of suspected perpetrators.[6] Of the 185 investigation files monitored by the organization, which were opened between 2014 and 2017 and reached a final stage, 21, or 11.4 per cent, led to the prosecution of offenders, while the other 164 files were closed without indictment. The equivalent rate of indictment for the period 2005-2013 stood at 7.5 per cent (73 out of 978 investigations).

Yesh Din also noted an increase in the percentage of cases of settler violence documented by the organization, where the Palestinian victims choose not to file a complaint with the Israel Police, from 30 per cent in 2013-2015 to 42 per cent in 2016. Most of these victims cited mistrust of the Israeli authorities, while others cited fear of negative repercussions for themselves or to their families.

Increase in settler violence in the southern Hebron area 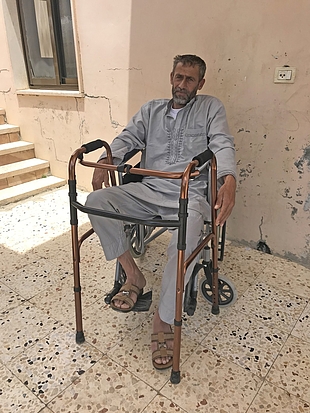 Ma’on settlement (pop. 539 in 2016), was established in 1981 in the southern Hebron area. A settlement outpost, Havat Ma’on, was established in 1997 within the boundaries of Firing Zone 918, demolished by the Israeli authorities in 1999 and relocated to its current site, outside of the firing zone. Additional outposts were set up in subsequent years.[22]

Over the years, Ma’on settlement and the nearby outposts have been a source of friction and violence with local Palestinian communities, (particularly At Tuwani, Tuba, Khallet Athaba’ and Umm Fagarah), resulting in injuries and damage to property. Following repeated attacks by settlers on farmers, the Israeli authorities established a coordination mechanism to regulate Palestinian access to their land. Settlers have also attacked or harassed local Palestinian children while they were en route to school in At Tuwani, which has resulted in the children being escorted by international organizations, and by the Israeli military since November 2004.[23]

Jum’a Ar Raba’ai, a 48-year-old father of eight from At Tuwani, has been particularly affected by settler violence. In 2014, following a series of violent incidents, he petitioned the Israeli Supreme Court, requesting it to oblige the state to enforce the law on the violent settlers, to ensure him safe access to his land, and to remove the Havat Ma’on outpost. In response, the authorities implemented a series of measures, which led a significant reduction in settler attacks and intimidation in this area for the following years.

However, recently, settler violence emanating from Ma’on and its outposts has been on the increase again, with ten incidents recorded in between March and April 2018.

“Through legal aid, we managed to access the land continuously, with no need for prior coordination. In the past four years the land produced more due to our hard work; the more you invest in the land the more it gives back in return. Our persistence had prevented the settlers form attacking us; the most they would do was to let their flocks graze on our land and then leave. I always managed to document this with my camera, but the Israeli police didn’t consider these acts as something that needed to be investigated.”

However, during March this year a number of settler attacks resulted in damage to Jum’a’s property, with 18 of the family’s olive trees near Havat Ma’on outpost cut down on 10 March 2018. On 25 March, the following incident occurred as he worked on his land.

“I woke up in the early morning and walked to my land to harvest barley and to feed my 15 sheep. Before leaving I asked my son Ra’afat, who is 18, to follow me. While I was looking for some wood to light a fire, I saw four settlers coming from Havat Ma’on who started throwing rocks at me. I tried to flee, but I was prevented by a fifth settler. I was hit by a rock on the leg and fell to the ground from the pain. Right then, Ra’afat arrived and started shouting and screaming when he saw me lying on the ground being stoned and beaten. The settlers’ fled after one of them hit me on the head with the butt of his pistol, leaving me bleeding from the head.

“Ra’afat called for help but it was an hour and a half before a Palestinian Red Crescent ambulance arrived. I was transferred to hospital and operated on for complex fractures in my left leg. I’m am still unable to walk and have to use a wheelchair to move around.

“I still haven’t heard anything from the Israeli police. We thought that violence here had ended for good. But we were wrong.”

With no means of earning an income now, the family’s assets are depleting and they had to sell four of their 15 sheep to cover their basic needs and cut down on food items to cope. According to his wife, Jum’a has stopped taking his medication, because of the expense and because he can put up with the pain.

[2] The incident occurred on 8 April near Ma’ale Adumim settlement, and is the only incident of this kind in the list of 84 incidents during January-April 2018 referred to in this article.

[5] MoJ’s figures appear to merge settler attacks against Palestinians and those against Israeli forces, thereby hindering analysis of trends regarding accountability in cases of Palestinian victims.

[8] Notwithstanding the Israeli military escort, over 100 cases of aggressive threats and attacks against the children were recorded between November 2004 and December 2010. Christian Peacemaker Team and Operation Dove, The Dangerous Road to Education: Palestinian Students Suffer under Settler Violence and Military Negligence, December 2010, p.4.