Demolitions and the story of a West Bank family

Aziz,[1] is a 25 years old Palestinian from Khirbet ar Ras al Ahmar, a small Bedouin community in the northern Jordan Valley. Over the past six years, Aziz has experienced four demolitions by the Israeli Civil Administration (ICA). In February 2019, the ICA demolished seven structures belonging to Aziz, including the tents in which his family resides and shelters for his livestock. Rendered homeless, Aziz, his mother, brother and two sisters were forced to seek refuge in Tammum town (Tubas governorate) for a period of two weeks and leave his livestock behind, exposed to the harsh winter conditions.

So far this year, nearly 50,000 Palestinians have been adversely affected by the destruction of their animal shelters, water cisterns and networks, agricultural roads, commercial structures, and other properties.

Aziz’s family is one of scores affected by the spike in Israel’s demolitions and seizures of Palestinian property recorded in 2019. By end September, 443 structures have been targeted in more than 80 communities across the West Bank, including East Jerusalem, representing a 43 per cent rise compared to the equivalent period in 2018 (310 structures). As a result, 547 Palestinians, including 259 children, have lost their homes and been displaced, exceeding the number of people displaced in the entire 2018; nearly 50,000 additional Palestinians have been adversely affected by the destruction of their animal shelters, water cisterns and networks, agricultural roads, commercial structures, and other properties. The vast majority of incidents have taken place in Area C and East Jerusalem, on grounds that these properties lack Israeli-issued building permits, which are nearly impossible to obtain. 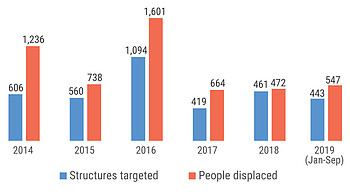 Demolitions have a devastating impact on Palestinians’ lives and ability to exercise their rights, and often result in psychological trauma, displacement, family separation, loss of livelihoods and access to basic services.[2] Along with a restrictive and discriminatory planning regime, movement restrictions, denial of basic services and aid obstruction, demolitions and seizures are part of a coercive environment that pressure many Palestinians to leave their homes and lands, in contravention with international law.[3]

Khirbet ar Ras al Ahmar, is located in Area C, in an area that was designated as a “firing zone” for military training, where entry is prohibited by military order. According to residents, however, the community existed there long before the designation of this area in 1970. Approximately 18 per cent of the West Bank, or about a third of Area C, have been declared “firing zones”, where 38 Bedouin and herding communities like Khirbet ar Ras al Ahmar are located. In this year alone, 26 structures have been demolished or seized in Khirbet ar Ras al Ahmar, leaving 30 people displaced, including 10 children.

In addition to the coercive environment experienced by Palestinians living in other parts of Area C, the approximately 6,200 people residing within these firing zones are also affected by recurrent temporary evacuations during military trainings, as well as the risks posed by unexploded ordnance.

Israeli settlements are illegal under international law and their development has taken place amid a highly discriminatory planning framework: Palestinians are allowed to build in less than 1 per cent of Area C and in only about 15 percent of East Jerusalem, which have planning schemes approved by the Israeli authorities. By comparison, approximately 8.5 per cent of Area C has approved planning schemes for settlements, and additional 11 per cent, approximately, are included within the municipal boundaries of settlements for future planning.[4] In East Jerusalem, 38 per cent of the area annexed to Israel in 1967 has been expropriated and planned for settlements.[5]

There are over 13,000 demolition orders pending against Palestinian property in Area C alone, with many of these orders targeting multiple structures.

This situation has forced Palestinians living in Area C and East Jerusalem to build without permit to meet their housing and livelihoods needs, despite the risk of having their properties demolished. According to information provided by the ICA, as of April 2017, there were over 13,000 demolition orders pending against Palestinian property in Area C alone, with many of these orders targeting multiple structures.[6] It is estimated that at least a third of all Palestinian homes in East Jerusalem lack Israeli-issued building permits, some of which have pending demolition orders.

The Israeli authorities also carry out demolitions in Areas A and B, where the planning and building powers are under the Palestinian Authority. Some of these are punitive demolitions targeting the family homes of perpetrators of attacks against Israelis, citing the need to deter similar attacks in the future. So far in 2019, six homes were destroyed on these grounds.

Demolitions are also executed citing other security concerns. On 22 July, the authorities demolished 10 buildings in a section of the Sur Baher neighborhood of East Jerusalem designated as Area A, citing their location in a buffer zone along the Barrier. Most of the structures targeted had been issued building permits by the Palestinian Authority. This demolition sets a dangerous precedent for many more Palestinian-owned structures located in the vicinity of the Barrier.[7]

Also of concern is recent Israeli legislation that significantly impedes the ability of humanitarian actors providing legal assistance to families at risk of displacement to challenge demolitions and seizures orders in Israeli courts. Military order 1797 applies to Palestinian structures in Area C deemed as new and expands the authority of the ICA to remove such structures within 96 hours from the issuance of a removal order.[8] The order has been implemented in nine recorded incidents since it came into effect in July 2019.[9] In addition, an order allowing the seizure of “mobile” structures without prior warning is effective since mid-2017, and an amendment to the planning and building law[10] enabling to expedite demolitions in East Jerusalem, will come into effect in October 2019. 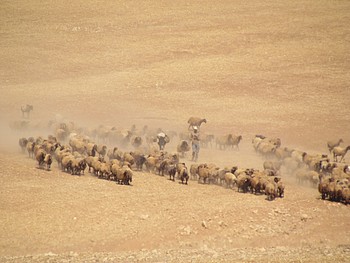 The humanitarian community provides protection and assistance to affected households and communities through an inter-agency demolition response mechanism led by UNOCHA. When a demolition or seizure takes place, an initial needs assessment is conducted, after which an alert is sent to the relevant humanitarian partners to finalize the assessment and prepare a response. When the structure targeted is residential, the Palestine Red Crescent Society (PRCS) or the International Committee of the Red Cross (ICRC) provide either a temporary tent or a small cash assistance within 24 hours to cover the immediate shelter needs of affected families. 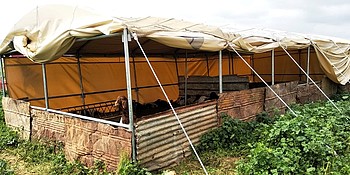 The assistance provided by the inter-agency mechanism includes one or more of the following elements: a more permanent shelter and/or cash assistance (supplementing the initial aid by PRCS/ICRC); livelihood solutions such as animal shelters; water and sanitation items; food; psychosocial support; education; and legal aid. Depending on the nature of the needs identified in the initial assessment, a specialized assessment may be carried out by the relevant partners prior to the delivery of further assistance.

The West Bank Protection Consortium (WBPC), which is an organizational umbrella of five international NGOs acting jointly, plays a pivotal role in this inter-agency response mechanism. The humanitarian assistance helps to mitigate the impact of the coercive environment and prevent a potential forcible transfer.

Aziz received emergency relief from the WBPC under the inter-agency demolition response mechanism, including residential and livelihood tents, latrines, water tanks and livelihood equipment. This assistance has allowed the family to stay in safety and dignity in Khirbet ar Ras al Ahmar, their community of origin. 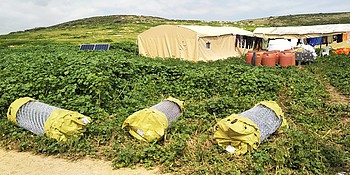 Aziz recalls: “Our situation was awful. I don’t know how I could have recovered without this emergency assistance. It would have been very difficult for me to cope with the needs of my family. We felt that we’d lost everything again and were very worried for our livestock”. Aziz continues: “The support we received allowed us to stay in our home community, and to restore my main livelihood activity. Today, thanks to this assistance, I have not only recovered my main source of income, but also developed and enhanced it. Before the demolition, we didn’t have adequate access to water. With the new water tanks, we now have access to drinking water, which improves my family’s living conditions and the health of our livestock.”

“It is the third time that we receive assistance following a demolition; and this support is very valuable and timely. It’s been crucial for our ability to recover materially and psychologically. Without it, we might have been forced to leave but we were able to stay and resume our lives,” concludes Aziz.

The main needs vs. responses recorded by OCHA 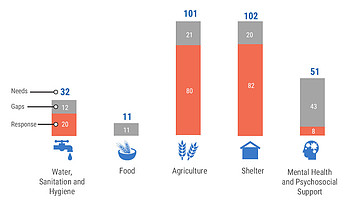 So far in 2019 (as of end September), UNOCHA has sent 297 “needs alerts” to partners in the response mechanism (one alert equals one type of response per incident). Assistance has been delivered following 190 alerts, while 107 responses are either pending or ongoing.[11]

Often, material assistance provided through this mechanism in response to demolitions is seized or destroyed by the Israeli authorities, on grounds of lack of building permits. As of end September 2019, 97 such aid structures, worth over 300,000 euros, have been targeted,[12] a three-fold increase compared to the same period in 2018 (32).[13]

95 per cent of the households assisted by the Protection Consortium in 2019 report that they are still residing in their communities three to six months after the response.

Despite this, the inter-agency mechanism has proven highly effective in addressing the immediate material needs of affected families, preventing displacement and enabling recovery. For example, 95 per cent of the households assisted by the WBPC in 2019 report that they are still residing in their communities three to six months after the response. Of concern, however, is the increasing number of households in East Jerusalem and Area C who report that they may be forced to leave their community or neighborhood in the future, because the assistance was not sufficient to restore their livelihoods. Similarly, there is an increase of households suffering repeated incidents, like Aziz in Khirbet ar Ras al Ahmar.[14] The response mechanisms, especially for cash assistance, are therefore being reviewed to better tailor the assistance to the specific needs of extremely vulnerable households.

[1] Name has been changed for the purpose of privacy and protection of those involved.

[3] “Displacement and relocation to alternative residential areas, as a result of demolition orders, and a coercive environment, could amount to individual and mass forcible transfer and forced evictions, contrary to the obligations of Israel under international humanitarian and human rights law”. Report of the Secretary-General, A/HRC/31/43, 20 January 2016, para. 68.

[5] Bimkom and Ir Amim, Deliberately Planned: A Policy to Thwart Planning in the Palestinian Neighborhoods of Jerusalem, February 2017.

[6] An online searchable dashboard presenting data on all demolition orders in Area C is available at OCHA’s website. Based on an examination of over 90 per cent of the records in 2015, the actual number of structures affected was estimated to be 17 per cent higher than the number of demolition orders issued.

[9] As of October, 2019, four structures were demolished and another five structures received demolition orders.

[10] The planning and building law from 1965 and its amendments apply to both Israel proper and East Jerusalem given the annexation of the eastern part of the city by the occupying power in 1967.

[11] In addition, there are legal interventions/counselling that are mainstreamed across the other types of responses.

[14] REACH, Evaluating the effectiveness of the assistance provided in response to demolitions in the West Bank and East Jerusalem, September 2018.

Threat of demolitions in East Jerusalem

Wadi Yasul: a community at risk of mass displacement