Half a million Palestinians internally displaced as a result of hostilities

Over 100,000 remain displaced, half of them with host families 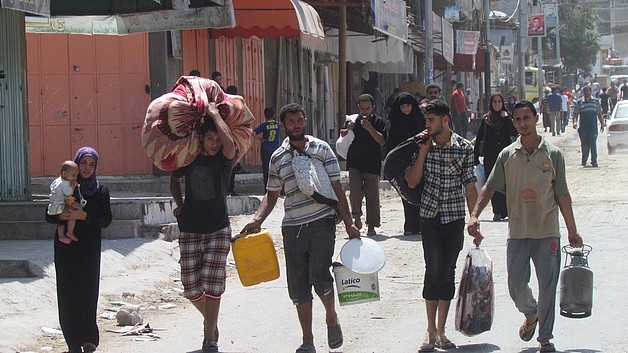 During the 50 days of hostilities, thousands of Palestinians fled their homes to take refuge with host families, in UNRWA schools, and in government and informal shelters. While the numbers fluctuated during the conflict, at various points approximately half a million Palestinians were internally displaced, constituting 28 per cent of the population. The largest exodus occurred from areas within three kilometres of the Gaza perimeter fence with Israel, declared by Israel as a buffer zone.

Approximately 60 per cent of internally displaced persons (IDPs) were hosted in UNRWA and government schools or informal shelters, and the rest with host families across the Gaza Strip, of whom over 151,000 registered with the Ministry of Social Affairs (MOSA). UNRWA shelters became increasingly overcrowded and were stretched beyond capacity as UNRWA had anticipated and prepared for the displacement of only 50,000 people, based on previous experiences.

Following the open-ended ceasefire announced on 26 August, the majority of IDPs returned home. However, the destruction of an estimated 20,000 housing units means that approximately 108,000 individuals will be long-term displaced as they do not have homes to return to. As of late September, around 62,000 IDPs were still living in 19 UNRWA schools, 750 in one government school, and about 40,000-50,000 with host families.

Understanding and responding to the needs facing IDPs with host families pose difficult challenges due to the geographical distribution, partial registration, and difficulties in monitoring IDP movements. Between 27 August and 4 September, OCHA carried out ten visits and focus group discussions with IDPs in host families to enhance understanding of their perceptions, needs, challenges and future options.

For all IDP focus group participants, the biggest challenge was their housing situation, followed by access to education. Other challenges included loss of income and livelihoods, lack of food, water and diversified food assistance, lack of NFIs (nonfood items), the need for financial assistance and psychosocial support interventions for children to prepare them for the new school year. 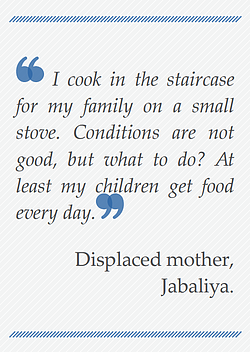 The majority of IDPs with host families reported issues related to access to water. In general, water for drinking and cooking was available, but in limited quantities and not always of good quality. Water for domestic use (showers / toilets) was extremely scarce and often poor quality. The municipal water supply had been damaged and was still not operational in at least three host family households out of ten visited.

IDPs sheltered in UNRWA and government schools did not have access to cooking facilities and therefore received daily, ready to eat food rations from WFP and UNRWA. At the height of the conflict, more than 350,000 displaced people received daily rations. Many IDPs sheltered in host families also encountered difficulties related to cooking. One IDP family consisting of 14 members, two of them disabled, was sharing one small kitchen with their host family of nine people. 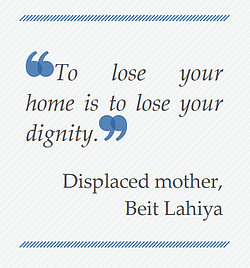 Overcrowding and lack of privacy associated with their current living conditions was another common theme for IDPs. One family was living in a building under construction with no doors and windows. The toilet, which they had built themselves from rubble, was situated in close proximity to their cooking and sleeping area. The entire family was sleeping in the same place and electrical wires posed a major risk. The lack of doors and windows meant that children could easily fall and get hurt and rendered the family vulnerable to theft.

Apart from one family, IDP families did not report major concerns related to their physical safety, although females felt safer to leave the house in their own neighbourhoods where they knew the neighbours and community members. In one IDP family, a boy in sixth grade was reportedly staying in or around the destroyed home, away from the host family, to keep an eye on the house and look for organizations to receive or register for assistance.

Many parents reported that their ability to care had been affected during the hostilities and that they were still feeling the repercussions. Bed-wetting, anxiety and clinging to parents were prevalent among children in at least three households.

Education was a major issue of concern in all the focus groups. Parents’ worries included children’s inability to concentrate due to psychological distress and overcrowding, insecurity about their future housing situation and proximity to schools, damaged and destroyed schools and schools being used as emergency shelters. Children worried about their living conditions, where they would stay and whether they would have to attend another school far from the familiar faces of teachers and fellow students.

“The school year will start soon. I am afraid they won’t be able to concentrate at home on their homework. One of my daughters had memorized the Quran; I often saw her sit and hold the book in her hands. But since we left our home, I haven’t seen any book in her hand, not the Quran or any other books. Most of my daughters are very academic, so I am worried. Even the recreational, psychosocial support programmes in UNRWA schools will not be so helpful. They are helpful for children who still have their homes to go back to. But those like us who lost their home, even if they do recreational activities every day in school, when they return home from school they will be reminded of the reality. So the effect will be minimal on them as long as they stay with host families and their situation is not relieved.” (Displaced father, Jabaliya)

Another challenge which resonated across the focus groups was access to livelihoods. Most families lost productive assets within or next to their destroyed homes: a grocery shop, a supermarket, trees and livestock. Many had unpaid loans on their homes and two heads of households were former government employees who had not received their salaries in months.

Agricultural livelihoods were greatly affected by the conflict and 23,600 households (14,000 farming, 6,000 herding and 3,600 fishing households) that rely on agriculture for their main source of income were impacted in some way. According to OCHA’s Multi-Sector/ Cluster Initial Rapid Assessment (MIRA), 93 percent of the interviewed communities reported that farmers, herders or fishermen had sustained significant damages and losses to their livelihood assets and 71 per cent of communities required urgent intervention for food and nutritional requirements.

Eighty per cent of participants living with host families reported that they planned to stay with the host family for the coming weeks, while looking for rented accommodation. Twenty per cent said that they intended to relocate to UNRWA schools used as emergency shelters close to their area of origin to enable their children to attend school and to pursue aid registration and damage assessments at first hand.

All participants stressed their desire to reconstruct their homes as the long-term option, and to rent accommodation for the transitional period. A small number of IDPs mentioned that prefabricated housing units or containers could be an alternative option, but only if rental accommodation were not available, and after ensuring that the unit would be located near to their original home and would be connected to basic services. All interviewees reported the lack of construction materials and financial means (including unpaid salaries) as the main obstacles preventing them from realizing their preferred housing option. Twenty per cent reported that the lack of available and affordable housing for rent was an obstacle.