This article was contributed by the Gaza Protection Consortium (GPC)[1]

“I have lived in rented accommodation for the past 25 years,” said Sabreen, aged 40, who lives in Beach Camp, near Gaza City, along with her husband and six children. “During these years, I was evicted 15 times for not paying rent. My husband was a fisherman, but he has been ill for the last six years and can’t work.”

Sabreen’s eldest sons, Mahmoud, 17, and Muhammad, 15, dropped out of school to work in the fishing and construction trades. In order to cover their basic needs, such as food, water and health, the family relies primarily on borrowing and has accumulated 14,000 Israeli shekels, equivalent to about US$ 4,360.

The outbreak of COVID-19, and the measures implemented to contain it, have eroded the already limited purchasing power and resilience of poor people like Sabreen across the Gaza Strip. By the third quarter of 2020, 48.6 per cent of the work force in Gaza was unemployed,[2] while the proportion of poor households is estimated to have reached 64 per cent, by the end of 2020.[3]

With the purpose of developing a cash assistance programme for the most vulnerable families, and generating a baseline for future evaluations, the Gaza Protection Consortium (GPC) carried out a multi-sectoral needs assessment among refugee families living in “deep poverty”, i.e., with an income of less than ILS 1,974 per month (about $615).[4] While registered refugee families benefit from food assistance and services provided by UNRWA, the UN agency for Palestine refugees, this has not been sufficient to lift them out of extreme poverty, and many require additional support.[5] The serious financial crisis affecting UNRWA may result in further deterioration in the socioeconomic situation of refugees in Gaza.

The assessment was conducted between August and September 2020, in which period all families meeting the above criteria were contacted, either in person or by phone, resulting in a total of 2,241 family representatives being interviewed.[6]

The average household assessed had 6.4 nuclear members, slightly above the Gaza average of 5.8. However, nearly half had extended family members residing within the same dwelling, bringing the effective average size to 7.5 members. About half of the families have at least one member with a chronic illness or disability. Nearly three-quarters of the adults reported that they had not engaged in any form of paid work in the preceding 30 days, while 22 per cent reported having a temporary job during that period, and only four per cent a permanent job.

One of the assessment’s key findings is that, in order to meet their basic needs, some 90 per cent of the assessed families have accumulated significant debt, relatively to their income, in a manner that is unsustainable and has negative ramifications.  Other coping mechanisms reported by the families to meet their basic needs, include reducing non-food expenditures (41 per cent), sending family members elsewhere to eat (29 per cent), and withdrawing their children from school (five per cent).

The average monthly income reported by the surveyed households amounted to ILS 382 (~$119), while the monthly expenditure, on average, was ILS 726 (~$226). The average household debt accumulated by the time of the assessment stood at ILS 10,173 (~$3,169), which is equivalent to more than twice the annual income of the surveyed families.

On average, the assessed families allocate 41 per cent of their monthly expenditure on food, followed by debt repayment (16 per cent), health (9 per cent) and education-related expenses (7 per cent). The large expenditure on food is also noteworthy in light of the fact that almost all families are beneficiaries of UNRWA’s food assistance.

Provided that an average family does not take on new liabilities, it would take six years to fully repay their debt without assistance. Two thirds of the surveyed households reported that they had not made any repayments in the month preceding the assessment.

The bulk of the debt is incurred informally, mostly from local shops, family members, friends, other members of the community and employers. Very few families reported resorting to formal lending from institutions, such as banks and local savings and loan organizations. Over half of the families (52 per cent) reported debts accrued from more than one lender, and nine per cent with three or more lenders. The limited capacity of families to repay their debts is expected to reduce the ability and/or willingness of lenders to continue lending, thus rendering this coping mechanism unsustainable. 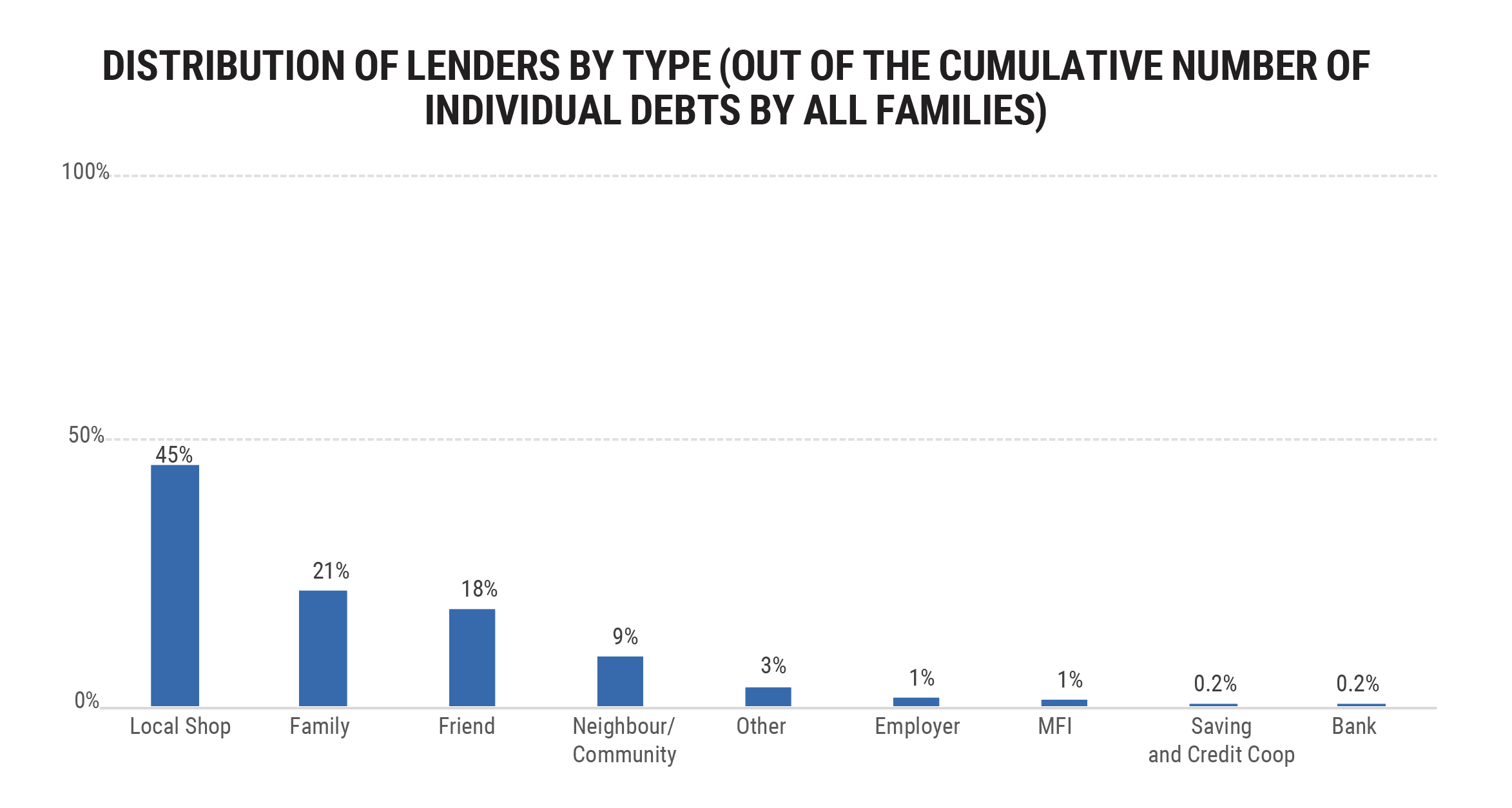 The high level of indebtedness, along with the incapacity of families to repay, is a significant source of stress and hardship. One quarter of families reported being at risk of imprisonment and 23 per cent report not feeling safe in their area in connection to their debt, presumably due to potential confrontations with the lender. Of the 10 per cent of the assessed families living in rented accommodation, two-thirds (66 per cent) reported being at risk of forced eviction due to their inability to pay the rent.

“I cannot sleep thinking about our debts,” said Sabreen. “We owe rent money for this and for previous houses we rented. We also owe money to sellers at the vegetable market and local shops. I used to borrow from my sister, but now, because of COVID-19, her financial situation is worse and she cannot help us. One of my son’s friends lent us ILS 1,700 (~$530), and now he wants his money back.” 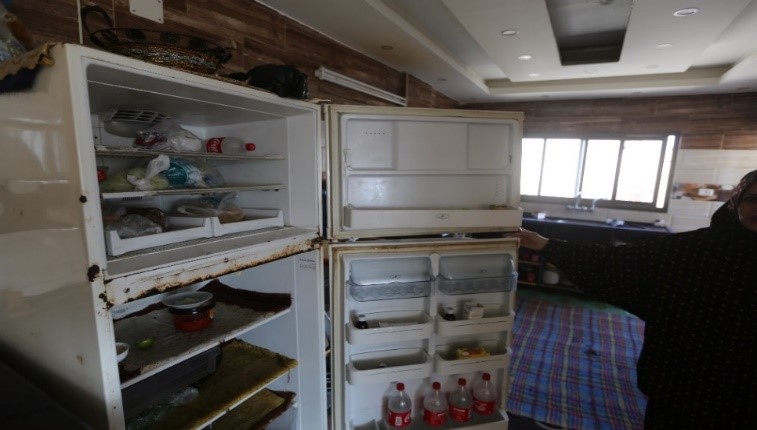 Based on the assessment, the GPC identified the 1,499 most vulnerable refugee households to be provided with cash assistance. The assistance consists of five monthly transfers (from October 2020 to February 2021) of ILS 1,185 (~$369) per month per family. This amount is estimated to cover 60 per cent of the ‘Minimum Expenditure Basket’ (MED), as calculated by the interagency Cash Assistance Working Group.[7]

Beneficiaries are expected to use this assistance to meet their basic needs, such as improving their food consumption and reducing the use of negative coping strategies. However, the assistance, which is distributed via electronic cards to be used at ATM machines, is unconditional and unrestricted. This modality is aimed at ensuring the freedom of beneficiaries to determine their own priorities, as well as their dignity.

Kefaiah, 46, and mother of two children, is one of GPC’s beneficiaries. She is an amputee and suffers from diabetes, while her husband, Alaa, is paralyzed. Both require regular medical treatment and medications that cost about ILS 330 per month. They have used some of the cash assistance they received to cover the fees for a private medical visit and avoid overcrowding at a public hospital during the pandemic. “In the past, the pharmacy owner refused to give me the medicine on credit, as he did not trust my ability to repay, but after I started receiving the cash assistance I was able to get our medicines,” said Kefaiah.

The extension of the GPC’s cash intervention programme beyond the current phase, ending in February 2021, depends on the willingness of donors and member states to contribute the necessary funding.

While cash assistance is essential to provide some temporary relief to affected families, it is far from being a sustainable solution. Reducing poverty and aid dependency requires significant changes in key policies and practices shaping Gaza’s situation, including a lifting of Israel’s blockade, in line with Security Council Resolution 1860, a long-term halt in hostilities between Palestinian armed groups and Israel, and a resolution of the internal Palestinian divide, among others.

[1] The GPC was established in 2020, as a joint venture between the Norwegian Refugee Council (NRC) and Mercy Corps, supported by the EU (ECHO), and in cooperation with the World Food Programme (WFP).

[4] This line applies to a household composed of two adults and three children. Palestinian Central Bureau of Statistics, July 2019

[5] Non-refugee families are being assessed by WFP and will be eligible to a similar cash assistance intervention as that provided to refugees.

[6] The families targeted were identified among those who applied for cash assistance from the Ministry of Social Development (MoSD).

[7] A MEB is defined as the goods and services a household needs to meet its essential needs on a regular (weekly, monthly, seasonal) basis, and the value of those goods and services. It is an inclusive estimate of needs, as perceived and defined by crisis-affected populations and service and assistance providers.