as part of
The Monthly Humanitarian Bulletin | January 2017 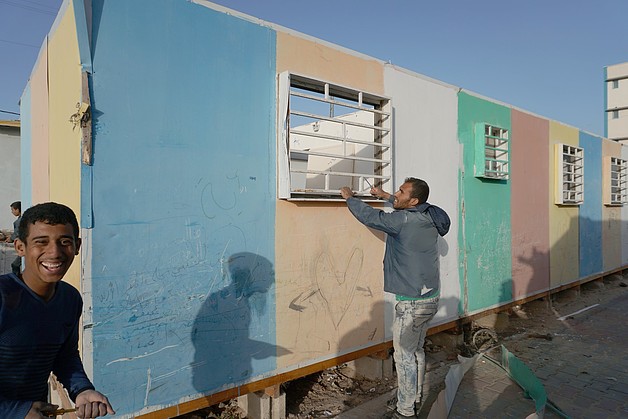 Eight winter-related projects of the 2016 Humanitarian Response Plan are underway following the allocation of around $3 million by the oPt Humanitarian Fund (HF) in late November 2016. More than two thirds of the projects are run by national NGOs either directly or in partnership with UN agencies/ international NGOs. The projects target more than 181,000 Palestinians who are at risk of displacement and/or face safety hazards due to winter weather conditions, particularly flooding and storms. Six projects are in the Gaza Strip and two in the West Bank.

In Gaza, poor storm-water drainage and power cuts place between 430,000 to 500,000 people, 64 schools and 10 health centers at risk of flooding. Children are at risk of drowning or contracting waterborne diseases such as diarrhea, hepatitis A, meningitis and typhoid. Four of the HF projects provide infrastructural, technical and educational support to service providers and households in the areas most vulnerable to winter flooding. The interventions benefit over 176,000 people through the construction, rehabilitation and improvement of drainage systems and stormwater networks; isolating sewage networks; and awareness campaigns about private/public hygiene, public health hazards and environmental pollution. Support to households includes the provision of hygiene and winter clothing items, especially to the most disadvantaged families such as female-headed and displaced households.

The other two Gaza projects, run by UNRWA and UNDP, provide emergency rental subsidies to relocate internally displaced families, some 1,600 individuals, who lost their homes during the 2014 conflict and have been living in dilapidated, poorly insulated and unsafe metal caravans.[16] By the end of January, with HF support, these families had found more suitable housing and the caravans are no longer in use.

In the West Bank, the two funded projects address the shelter needs of 1,235 Palestinians living in communities in Area C that face a coercive environment due to Israeli policies, and whose homes and livelihood facilities are particularly vulnerable to winter-related hazards.

One project run by a national NGO (the Ma’an Development Center) supports the rehabilitation of homes in four Palestinian herding communities in south Hebron comprising 192 women, 188 men and 131 children. The average income of households in these communities is less than $571 a month ($3 per member per day), more than half of which is spent on food and medicine. Due to their low income, residents cannot afford to maintain their homes, which are in poor condition.

The second project, run by an international NGO (Agency for Technical Cooperation and Development), provides emergency shelter to vulnerable households whose homes and animal shelters are demolished by the Israeli authorities or damaged as a result of winter storms and/or flooding.[17] The HF allocation bridges the funding gap in regular inter-agency demolition response mechanism, incurred by the sharp upsurge in demolitions in 2016, which more than doubled compared to 2015. 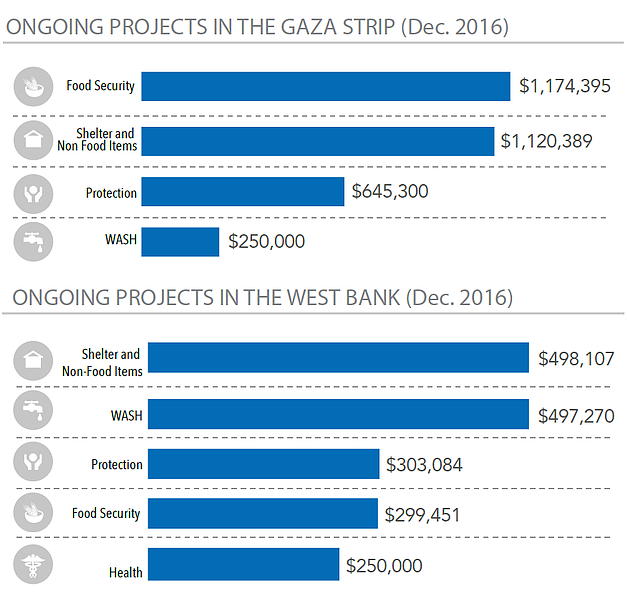 The oPt Humanitarian Fund (oPt HF) primarily supports the delivery of strategic humanitarian responses identified under the Humanitarian Response Plan (HRP), while retaining the flexibility to allocate funds to unforeseen events or other special requirements. The HF allocates funding to needs-based priority sectors and geographic areas. The fund has the following main objectives: support life-saving and life-sustaining activities while filling critical funding gaps; promote needs-based assistance in accordance with humanitarian principles; strengthen coordination and leadership primarily through the function of the Humanitarian Coordinator and by leveraging the cluster system; improve the relevance and coherence of humanitarian response by strategically funding priorities as identified under the HRP; expand the delivery of assistance in hard-to-reach areas by partnering with national and international NGOs.[18]

[16] For further details on the conditions of IDPs living in metal caravans, see the October Humanitarian Bulletin.

[17] The estimated number of ACTED beneficiaries for this project is 585 vulnerable individuals: 284 children, 53 elderly people and 145 women.