In January, 40 Palestinian-owned structures were demolished or seized by the Israeli authorities, almost the same as the monthly average recorded in 2018, displacing 44 people and otherwise affecting some 200 others. One of the demolitions took place on punitive grounds and the remaining occurred due to the lack of Israeli-issued building permits, which are almost impossible to obtain. 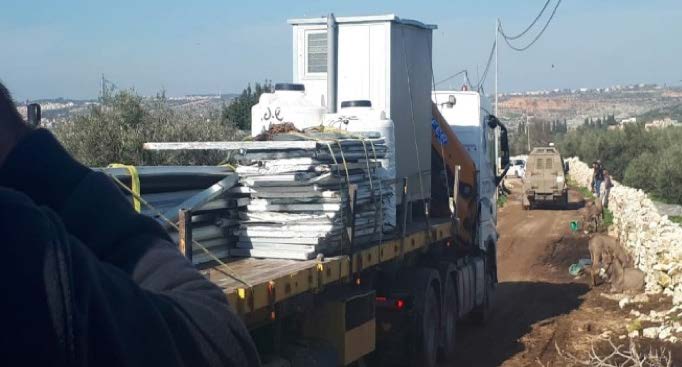 Over 70 per cent of the structures targeted this month were in 11 communities in Area C. In one of them, in Beit Iksa (Jerusalem), the livelihoods of 50 people were affected by the demolition of four animal structures, a cesspool and the walls surrounding one home, with losses estimated at over 1.25 million shekels (~303,000 euro). Beit Iksa (aprox. 1,700 residents) is one of other “dislocated” Palestinian communities in the Jerusalem area that have been physically separated from the rest of the West Bank by the Barrier, but residents are not allowed to enter East Jerusalem.

In As Simiya village (Hebron), three tents, provided by the Palestinian Ministry of Education to serve as a school, were seized, affecting 45 children; this is the third time in four weeks that structures for this school have been seized. In a joint statement issued on 30 January, the Humanitarian Coordinator and UNICEF expressed deep concern “by the high number of reported incidents of interference in or near schools in the West Bank since the beginning of the school year”.

In Imreiha village (Jenin), also in Area C, two structures funded by the EU and its member states, including a home and a mobile latrine, were confiscated. As a result, four people were displaced. In the same village, in May 2018, the Israeli authorities issued a stop-work order (SWO) against an EU-funded school worth 28,000 euro. Seven other EU-funded structures in three other communities were served with demolition and stop-work orders during January.

In East Jerusalem, ten structures were targeted during January, less than the monthly average recorded in 2018 (15). Additionally, a Palestinian refugee family became at heightened risk of forced eviction from its home, following an Israeli court ruling in favor of a settler organization claiming ownership over the land. The home is located in the Sheikh Jarrah neighbourhood, where the family was settled, with the support of the United Nations and the Jordanian government in the 1950s. At least 870 Palestinians in East Jerusalem have pending eviction cases filed mainly by settler organizations.

Also this month, the Israeli military destroyed with explosives an apartment in the town of Yatta (Area A) on punitive grounds. The apartment was home to a Palestinian who stabbed and killed an Israeli settler in September 2018, and was arrested, after he was shot and injured.