"I was born twice. The first birth was my real one, and the second was on the day I decided to seek support. I was very insecure and felt helpless. Now, after getting help, I have become a strong woman and can claim my rights."

Jamila Salman is a divorced Palestinian, mother of three, from Gaza. In 2008, she graduated with a nursing degree and got married. Throughout her marriage, she had had to endure poverty and violence perpetrated by her drug-addicted husband and his extended family. Fears of social stigma led her own family to oppose her getting a divorce, which she only managed to get in 2015, after telling her family she would commit suicide. 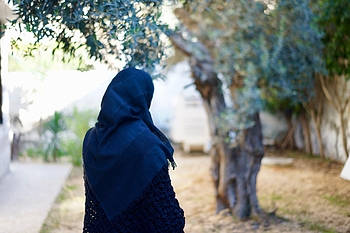 After getting the divorce, Jamila and her children moved in with her parents and siblings, but her suffering did not end, as her brothers abused her physically and verbally. She desperately needed help.

In 2019, Jamila was one of 12,650 women to receive services as part of a project targeting female victims and survivors of gender-based violence and women affected by the conflict across the Gaza Strip. The project runs by AISHA, a Palestinian partner of UN Women, with funding received from the Humanitarian Fund for the occupied Palestinian territory (oPt HF). Services included awareness-raising, legal and vocational training sessions, psychosocial support and entertainment activities.

Jamila was also selected as a beneficiary of a ‘Cash for Work’ intervention, thanks to which she could hone her skills and education as a nurse through a three-month appointment at a health centre. Now, she feels empowered.

“I am very happy to work in my field,” she says. “Actually, this was my first chance to utilise my nursing skills. I had never worked as a nurse before, because I got married right after graduating.”

Jamila continued: “I was born twice. The first birth was my real one and the second was on the day when I decided to seek support. My life has really changed. I was very insecure and nervous. Now, after getting help, I have become a stronger woman and feel empowered enough to claim my rights.”

* Note: Jamila Salman’s name has been changed to protect her privacy.