Published as part of
The Monthly Humanitarian Bulletin | October 2018

A recent report [1] prepared by the RAND Corporation warns that if the chronic state of emergency in Gaza’s water and sewage sector continues, an endemic disease outbreak or other public health crisis is imminent, with the risk of it spreading to Israel and Egypt.[2] The projection is based on data collected by Water Sanitation and Hygiene (WASH) partners and authorities over previous years, analysis of the expected impact of recent developments, and lessons learnt from disease outbreaks in Haiti, Yemen and Iraq. The report emphasised that cooperation between the Palestinian Authority, Israel and Egypt is vital if an epidemic is to be pre-empted.

The main causes of the water and sanitation crisis are the depletion and poor quality of Gaza’s single coastal aquifer, which is the source of 95 per cent of all water in Gaza. Until the 1990s the aquifer provided Gaza Strip inhabitants with drinkable tap water. Today 97 per cent of this water is unfit for human consumption based on World Health Organization (WHO) standards. The primary driver of contamination of the aquifer is the longstanding over-extraction of almost three times more water than is naturally replenished by rainfall.[3] This practice results in increasing intrusion of seawater. The sea also flushes back to the shores of Gaza large amounts of untreated or insufficiently treated sewage that is dumped into the sea, mainly due to the energy crisis.[4] Open sewage runoff and agrichemicals also seep into the aquifer. 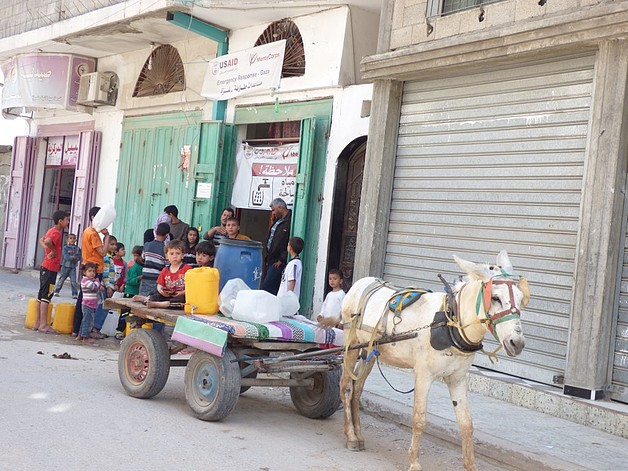 The water and sewage situation in Gaza, including the contamination of the aquifer, has been exacerbated over the past decade by a range of other factors that include damage to infrastructure during the recurrent hostilities; insufficient, unreliable and fluctuating electricity available to operate WASH facilities[5]; import restrictions on materials and equipment categorised by Israel as “dual use” items which cover some 70 per cent of WASH-related equipment [6]; and funding shortages for damaged and worn infrastructure, salaries and maintenance.

Despite geographical variations in water quality across Gaza and efforts to improve the quality of water extracted (by mixing it with desalinated water or with water purchased from Israel), most water piped to households through the network is unfit for human consumption. This water is for use solely for domestic purposes other than drinking or cooking.

Residents in Gaza are aware that most tap water is unfit for human consumption and 9 out of 10 people rely on desalinated water, 81 per cent of which comes from the private sector.[7]  It is purchased in containers or tanks at prices 10-30 times more expensive than piped water, thus posing a heavy burden on already impoverished families.

Apart from the economic burden, this situation generates a range of health hazards. Although the quality of desalinated/purified water is better than that of piped water, desalination/purification does not necessarily remove all pollutants, compounded by the fact that desalination plants do not function at full capacity due to the poor power supply.[8] In addition, contamination may occur during the transportation and storage cycle as a result of unmaintained or unsanitary water trucks and points of distribution. According to data collected in March 2016, less than a third of desalinated water vendors (48 of 154) were licensed and monitored.

Responding to the water and sanitation crisis

The longstanding water and sanitation crisis affecting Gaza requires massive infrastructural investment, a sustainable solution to the energy crisis, the lifting of access restrictions and political solutions, both internally and with Israel.

The fact that an epidemic has not yet occurred is due mainly to mitigating humanitarian responses, including WASH projects focused on ensuring clean drinking water, preventing raw sewage from overflowing into the streets and some treatment of wastewater; the supply of emergency fuel to operate essential facilities and services; and projects such as vaccinations delivered via UNRWA to some 77 per cent of the population in Gaza who are registered as Palestine refugees.

However, it is becoming increasingly difficult to mitigate the impact of the water and sanitation crisis. At a time of increased need, funding for the oPt is at an all-time low. By October, only US$197.7 million had been secured of a requested $539.7 million for the 2018 Humanitarian Response Plan (HRP), i.e a mere 36 per cent. The situation regarding interventions by the WASH cluster is even worse: only 21.7 per cent of $45.5 million in funding required for responses in 2018 has been so far provided.[10] In fact, nearly all agencies requesting funding through the HRP have received less funding in 2018 than in previous years, including UNRWA whose operations have been undermined by the US government ceasing its financial support to the Agency.[11]

Humanitarian interventions planned by the WASH cluster for 2019, assuming the availability of essential funds and energy, include the establishment, extension or rehabilitation of water distribution and sanitation systems and infrastructures; improvements to WASH facilities in key service institutions; supplying households without sanitation facilities to end open defecation and ensure access to at least basic sanitation; and providing WASH facilities with emergency power requirements (fuel and/or renewable energy), equipment and maintenance to enable lifesaving operations to continue.[12] 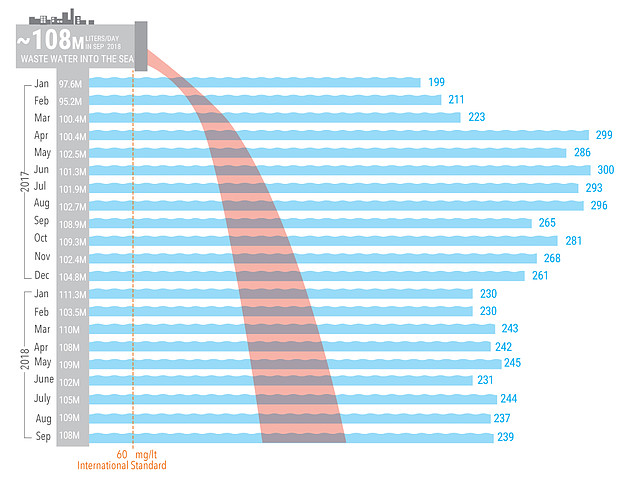 According to RAND, one-fourth of all diseases in Gaza are waterborne. In 2009, UNICEF reported that 12 per cent of deaths in children and infants were caused by diarrhoea. In 2011, 26 per cent of all childhood diseases in Gaza were identified by UNICEF as waterborne.[13] In 2016, poor water quality and access to water contributed to over a quarter of all reported diseases in Gaza, according to WHO.[14] In the same year, the Palestinian Ministry of Health identified several diseases stemming from poor personal hygiene[15], including acute hepatitis A, typhoid fever and acute diarrhoea. These diseases can jeopardize the nutritional status of newborns and infants, and may lead to stunting and developmental delay.  In 2016, viral meningitis was identified as the most common infectious disease observed in children in Gaza; recurrent outbreaks in 1997, 2004 and 2013 disproportionally affected children and infants on each occasion. Although the causes of this disease can vary, it is apt to spread faster in areas with a poor water supply and poor personal hygiene. It is estimated that difficulties in epidemiological data collection may mask more severe public health effects emerging from the water and wastewater crisis. 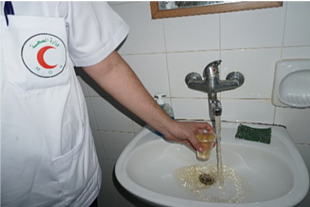 Water is frequently unavailable at Al-Shifa, the largest hospital in Gaza. When it is available, it is not fit for use. Water is “either cut off, rusty or salty”, says Dr. Nassir Hammad, head nurse of the Surgical Department. This is particularly challenging given that the prepping of patients and medical staff sterilization processes requires clean water rather than the unsafe water currently provided through the network.

“When the water is cut, all the sterilization process from machines, instruments, beds and rooms is affected. Even when water is available, doctors and nurses are often unable to sterilize their hands to carry out surgery because of the water quality.”

Medical staff try to find solutions to keep operations on schedule, including checking if there is water in other departments, purchasing water where possible and using sanitizing gels. The hospital has even asked patients coming to undergo surgery to either bring water from other departments or bathe before coming to the hospital.

Apart from the dangers associated with these measures, they are not reliable solutions. According to Dr. Hammad: “In many cases, operations have had to be rescheduled due to the lack of water, or we wait until water is available.”

Post-operation infections could be reduced through the use of clean water but is being addressed by using sanitizing gels. The problem of sanitizing equipment remains unresolved, and the salty water available from the network has caused medical tools to rust and valuable medical equipment to malfunction. Replacement equipment is difficult to obtain due to funding shortages, access-related limitations and the short life span of this equipment in light of the ongoing water crisis.

[1] The report, The Public Health Impact of Gaza’s Water Crisis: Analysis and Policy Options, describes the relationship between Gaza’s water problems and its energy challenges, and examines the implications of Gaza’s water crisis for public health. It reviews the state of the current domestic water supply and water sanitation in Gaza, and analyzes water-related risks to public health in Gaza with potential risks for Israel and Egypt.  RAND Corporation, Preface.

[2] The report highlights the periodic closure of Israel’s Ashkelon desalination plant in 2016 due to pollution from Gaza as an indication of the impact of Gaza’s crisis on Israel.

[4] The energy crisis includes lack of both sufficient electricity and fuel. The rising electricity deficit in recent decades has been driven by the lack of infrastructural development despite rapid population growth. Since 2017 this has been aggravated by internal divisions following disputes between the PA and Hamas over the funding and taxation of fuel, and the collection of electricity charges. HNO Overview, 2018.

[5] Piped water reaches most homes for only a few hours every 3-5 days due to the inconsistent electricity supply.

[7] AFD, Public-Private-NGO Partnership for Adaptation to the Drinking Water Crisis in the Gaza Strip – Concept Paper – May 2016, page 1.

[13] Israel, Ministry of Justice, Israel’s Investigation and Prosecution of Ideologically Motivated Offences Against Palestinians in the West Bank, October 2018, p. 1.