Published as part of
The Monthly Humanitarian Bulletin | February 2016 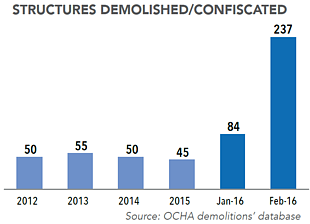 There was a sharp increase in Palestinian-owned structures destroyed, dismantled or confiscated by the Israeli authorities in the West Bank during the first two months of 2016: At least 320 structures, including 88 homes, were destroyed.[1]

February 2016 stands out as having the highest number of structures demolished in a single month since OCHA began the documentation of demolitions systematically in 2009. More than 90 per cent of the demolitions that took place in the past two months were in Area C, three in Areas A and B (punitive demolitions), and the remainder in East Jerusalem.

The first two months of the year were also unusual in the number of sites affected (45), including small herding communities and villages with part of their built up area in Area C. Over half of those displaced (231 people) were from five communities located in “firing zones”: Halaweh and Jinba in the Massafer Yatta area of Hebron (firing zone 918); Ein ar Rashash (Ramallah, firing zone 906); and Al Jiftlik-abu al Ajaj (Jericho) and Khirbet Tana in the northern Jordan Valley (firing zone 904). The demolitions in the first two communities follow the end (without agreement) of a mediation process taking place in the context of a  petition filed with the Israeli High Court against the eviction of these and another ten communities from the affected area.

Approximately 18 percent of the West Bank has been declared by the Israeli authorities as “firing zones” despite 38 Palestinian communities, home to over 6,000 people, residing in these areas. A recent study indicated that, in practice, nearly 80 per cent of the areas declared as “firing zones” have not been used for training in recent years.[2] Following a recent demolition in a firing zone, an Israeli Ministry of Defense spokesperson stated that the targeted structures “were built illegally without permits in a firing zone, which is a life danger”.[3] 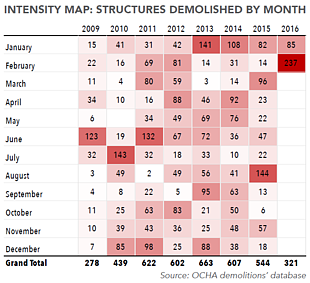 All of the demolitions in Area C, and most of those in East Jerusalem, were carried out on the grounds that the structures lacked Israeli-issued building permits; these demolitions are considered as lawful enforcement measures by the Israeli authorities.[4] However, building permits are nearly impossible to obtain in Palestinian communities. The UN Secretary-General has noted that Israel “must urgently cease discriminatory and unlawful planning processes in the West Bank, including East Jerusalem, as they result in violations of Palestinians’ rights, inter alia, to access water and services, including health and education.”[5]

The Israeli authorities also demolished or sealed the residences of three families of suspected perpetrators of attacks against Israelis in October 2015, citing deterrence needs, displacing 19 people, including seven children. Under international humanitarian law, the destruction of property in an occupied territory is prohibited unless absolutely necessary for military operations.[6] 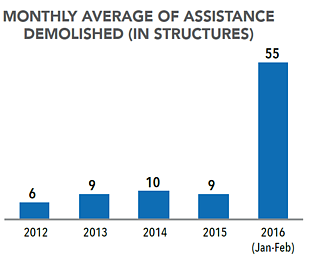 There has also been a sharp increase in the demolition of structures provided as humanitarian aid. Humanitarian actors, including both UN agencies and NGOs, have faced serious constraints for years when trying to access and provide much-needed emergency assistance to displaced families and communities. In the first two months of 2016, 109 structures provided by aid organizations were demolished by the Israeli authorities, more than five times the monthly average for similar demolitions in 2015 (108) and 2014 (116). This practice runs counter to international humanitarian law, which requires Israel as the occupying power to facilitate the rapid and unimpeded passage of humanitarian assistance. Following a 19 January visit to a Palestinian Bedouin community (Abu Nuwar in the Jerusalem periphery), where 13 structures provided as humanitarian assistance had been demolished, the UN Humanitarian Coordinator for the oPt, Robert Piper, and the Director of UNRWA Operations in the West Bank, Felipe Sanchez, condemned the destruction of assistance. They also called for revocation of the plan to “relocate” the community, which may constitute forcible transfer. 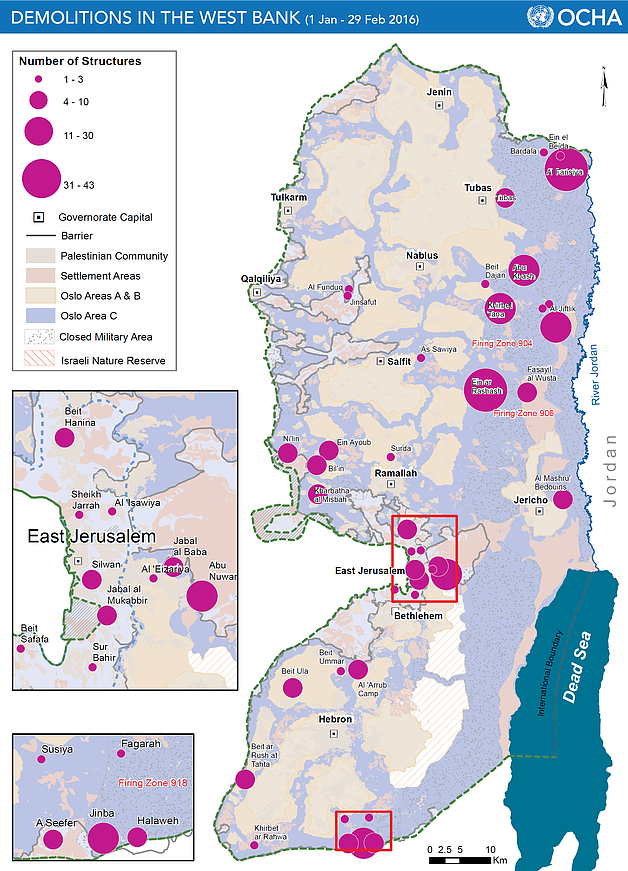 [4] For a recent statement of this position see here.

[5] Report of the Secretary-General: Israeli settlements in the Occupied Palestinian Territory, including East Jerusalem, and in the occupied Syrian Golan, A/HRC/25/38, 12 February 2014, paras. 11-20.

[7] Response dated 16 November 2014 from Lieut. Aliran Sasson of the Civil Administration to a request under the Freedom of Information Act submitted by Adv. Sharon Karni-Cohen of Bimkom.