Sharp increase in ratification of declarations of “state land”

as part of
The Monthly Humanitarian Bulletin | June 2016

“The creation of new facts on the ground through demolitions and settlement building raises questions about whether Israel’s ultimate goal is, in fact, to drive Palestinians out of certain parts of the West Bank, thereby undermining any prospect of transition to a viable Palestinian state.”

UN Secretary-General’s remarks to the Security Council on the situation in the Middle East, 18 April 2016

Ratification is a preliminary stage for settlement expansion

The allocation of public land to settlements and the takeover of private land by settler groups have reduced the space available for Palestinians to sustain their livelihoods in an increasingly fragmented West Bank and have impacted on a range of human rights.[i]  Combined with the unlawful and discriminatory zoning and planning policy applied in Area C and in East Jerusalem, these settlement-related phenomena have undermined the living conditions of Palestinians and rendered them increasingly vulnerable, including to the risk of individual or mass forcible transfer.

Official Israeli data for 2015 released in May indicate that there was a sharp increase in the review and ratification of areas of the West Bank which had been declared as “state land”, mainly during the 1980s.[ii] Under Israeli regulations, ratification is a necessary step for the allocation of land for settlement expansion or for the retroactive “legalization” of unauthorized outposts.[iii] Overall, a total of over 62,000 dunums (or 15,300 acres) were ratified as state land in 2015, the largest total since 2005.

This process is conducted by an Israeli Civil Administration (ICA) body known as the Blue Line Team. While this body is not officially entitled to make new declarations of state land, in practice the revision process has resulted in a significant expansion of the areas included in the original declarations over recent years.[iv]

Until August 2015, the Blue Line Team’s decisions were not publicly announced. Following a petition by Palestinians filed with the Israeli High Court of Justice, the Court ordered the ICA to notify residents of adjacent villages 45 days in advance of an intended ratification of a state land boundary to allow affected individuals to appeal. Human rights organizations have expressed concern that the level of technical capacity and prohibitive costs required to establish a claim against a revision of boundaries render the new procedure meaningless for most landowners affected.[v]

Area of "state land" declarations ratified by year (in dunums)

More than half of the areas ratified as state land in 2015 (some 32,500 dunums) are located in areas closed for military training (“firing zones”). Any type of construction or development within the boundaries of a firing zone is prohibited, regardless of the ownership status of the land in question (private or state land).[vi] However, in a number of past cases, the Israeli authorities have redrawn the boundaries of firing zones to exclude areas subsequently allocated for settlement development.[vii]

Firing zones cover approximately 18 per cent of the West Bank. More than 6,200 Palestinians currently residing in 38 herding communities located within firing zones are subjected to a range of coercive policies pushing them to leave.

One state land ratification carried out in 2015 was related to the settlement of Gitit in the central Jordan Valley. The state land ratified in this area encompasses 5,663 dunums, of which around 40 per cent are already included within the settlement’s municipal boundaries, with the rest outside them. Of the latter areas, 2,355 dunums are located within “Firing zone 904A”.

The potential expansion of the settlement into the ratified areas, including the reactivation of quarrying activities there, may increase the pressure on four nearby herding communities within the firing zone that are already affected by demolitions, access restrictions and severe levels of humanitarian need. The closest community, Tel al Hashaba (also known as Khirbet Tweil, pop. ~250) has faced 14 demolition incidents since 2012, during which the Israeli authorities demolished 63 structures, including 25 homes, on the grounds that they were built without a permit. 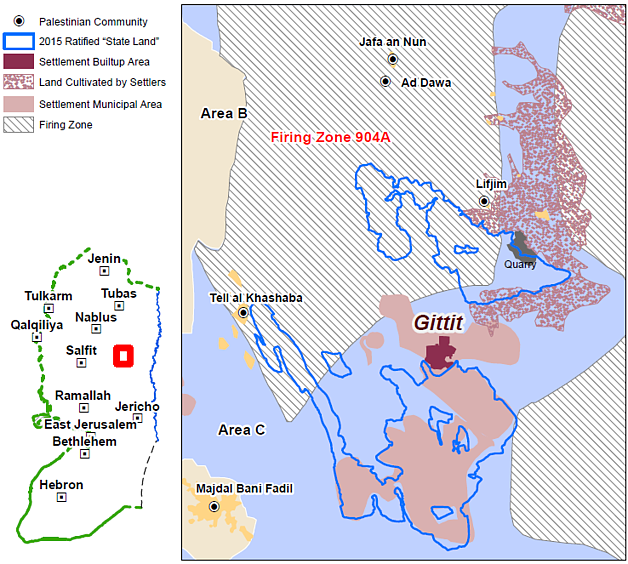 [ii] Information based on a digital map provided by the Israeli Civil Administration to Dror Etkes following a request under the Freedom of Information Act.

[iii] The Israeli policy of declaring land as “state land” is based on a controversial interpretation of a provision in the Ottoman Land Code of 1858 that stipulates that the state may take possession of land that is not cultivated for three consecutive years. The policy includes a restrictive interpretation of what constitutes “cultivation” for the purposes of the Code, as well as a range of bureaucratic and legal hurdles undermining the ability of Palestinians to effectively challenge such land seizures.

[iv] Israeli settlements in the Occupied Palestinian Territory, including East Jerusalem and the Occupied Syrian Golan, Report of the Secretary-General, A/HRC/31/43, 20 January 2016, para. 21.

[vi] The only exception to this prohibition concerns construction by persons given the status of “permanent dwellers” of a firing zone by the ICA; this status is rarely given.