Serious deterioration in access of humanitarian staff to and from Gaza

Published as part of
The Monthly Humanitarian Bulletin | November 2016

Israeli restrictions on the entry of national staff of aid organizations to and from the Gaza Strip have intensified during 2016. The denial rate for permit applications by national staff of UN agencies surged from four per cent in 2015 to 40 per cent in the third quarter of 2016 (see table). Available information indicates that the rate of denial for national staff of other humanitarian agencies has also risen.

The average time for processing permit applications increased from 21 days in 2015 to 26 so far this year. Some 60 UN national staff, half of whom had previously travelled frequently to and from Gaza, have recently been denied and also prohibited from applying for a permit for a further 12 months. Additional access obstacles include lengthy interrogations of national staff and instances of permit cancellation and confiscation at Erez crossing. While the number of such incidents remains consistent with previous years, the total hours lost due to interrogation has more than doubled since 2015.

In July 2015, the Israeli authorities announced a formal ban on entry into Gaza for Israeli passport or East Jerusalem ID card holders. The ban on the latter category was partially lifted in November 2015, with entry permitted on an “urgent/exceptional basis”. In June 2016, the authorities introduced a procedure which limited permit applications by Gaza ID holders to four per year, and for a maximum duration of one month (previously unlimited permit applications were allowed and were valid for up to three months).

This restrictive policy of permit denial is characterized by arbitrariness and a lack of transparency, with no explanation given other than “security reasons.” 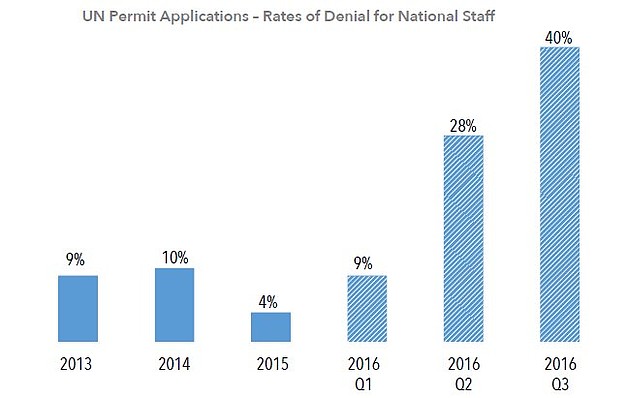 Access restrictions on national staff may gradually hinder the ability of organizations to operate and to respond to the needs of vulnerable populations. Staff have reported that lack of access has hampered their ability to carry out their functions, particularly those requiring coordination with staff based in the West Bank. This could increase the costs of humanitarian and development operations.