as part of
The Monthly Humanitarian Bulletin | October 2016 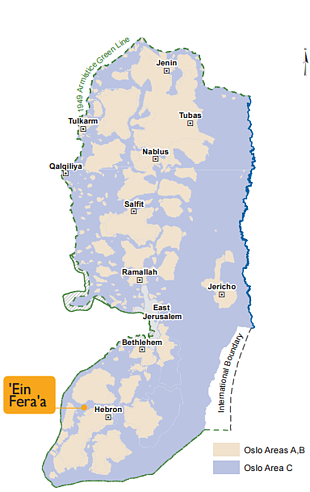 The natural water spring of ‘Ein Fera’a, one the largest in western Hebron governorate, is the sole source of water for a herding community carrying the same name that moved close to the spring some 30 years ago. The residents comprise about 11 households with about 80 people in total, all registered refugees. They rely on the spring for domestic water consumption and for watering their livestock, which is their prime source of livelihood. The landowner of the spring, a resident of the nearby town of Dura, also uses the water for irrigating the adjacent land, where he grows seasonal vegetables and crops. On hot summer days and when there are water shortages, he also pumps water from the underground pool to sell to families in Dura.[3]

In recent months, there has been a significant increase in the number of Israeli settlers, accompanied by security forces, visiting the spring to picnic or perform ritual baths. During this year’s Jewish festival of Sukkot (16-24 October), and following active promotion by the tourist association of the two nearby settlements (Telem and Adora), there were more than 1,000 visitors to the site.[4] 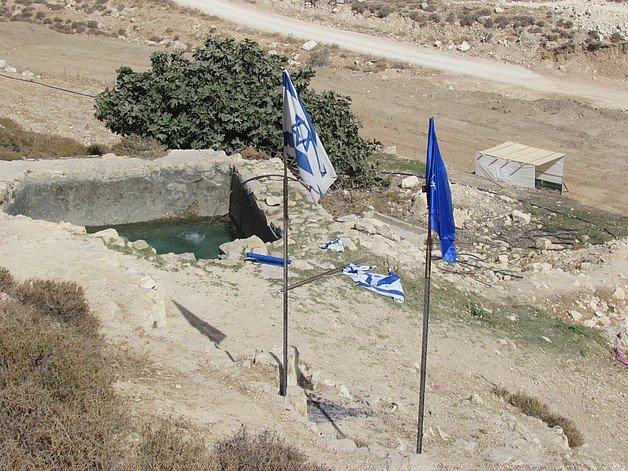 The constant presence of armed settlers on the site, and ‘stop and search’ practices by Israeli soldiers, have disrupted Palestinian access to the spring and limited it mainly to the hours before dawn or late in the evening. The regular bathing and swimming of settlers has also raised concerns about the quality of the water for drinking purposes.

According to the landowner, the army and settlers have sometimes (such as during the Passover earlier in the year) parked their vehicles on the cultivated area next to the spring, damaging the crops. This factor, combined with the wave of violence and rising tensions since October 2015, has forced the landowner to reduce the size of his farmed land from seven dunums to one dunum. His production and economic yield have fallen, while sales of water are also reduced.

The intimidation and access restrictions endanger the very existence of the ‘Ein Fera’a community. “If it was not for the water spring, we would have gone long ago,” a member of the community explained. “It is intimidation for transfer and control, but we are remaining steadfast,” said the landowner.

The case of ‘Ein Fera’a is not unique. In recent years, a growing number of water springs in Area C have become the target of settler activities that deny, or put at risk, Palestinian access.[5] A survey carried out by OCHA in 2011 found that thirty springs were under full settler control and inaccessible to Palestinians. [6] The main methods used to prevent Palestinian access are settler violence, including intimidation and threats, the de facto annexation of springs by settlements through erecting physical boundaries, and the isolation of areas of the West Bank by the Barrier and their subsequent classification as a closed military zone.

The survey also found that 26 springs were at risk of settler takeover, including springs that have become the target of regular “tours” by settlers and/or patrolling by settlement security coordinators. While at the time of the survey Palestinians could still access and use these springs, farmers and residents reported that the constant presence of groups of armed settlers is intimidating and discourages use. The takeover of springs undermines Palestinian control over space and water resources in Area C of the West Bank and entrenches the settlement enterprise even more.

Most activity entails the trespass of Israeli settlers into private Palestinian property, or the erection of structures and opening of roads around the targeted sites without building permits. The Israeli authorities have largely failed to enforce the rule of law on those involved, and in some cases have even facilitated these practices.

[3] The spring feeds water into two adjacent pools, one of which is underground and is about two metres deep, and the other is above ground and is 1.5 metres deep.
[4] Telem-Adora tourist association posted on its Facebook page [Hebrew] that the water spring would be open throughout the Sukkot holiday and that the association would coordinate with the Israeli army to provide security escorts for visitors (accessed on 17 October 2016).
[5] For a list of water springs promoted as tourist destinations by settler groups see here [Hebrew].
[6] For more details on the methods used by settlers to take over Palestinian water springs and the impact on Palestinians, see OCHA, How dispossession happens: The Humanitarian Impact of the Takeover of Palestinian Water Springs by Israeli Settlers, March 2012.