At risk of forcible transfer

as part of
The Monthly Humanitarian Bulletin | May 2016

The forcible transfer of protected persons from their normal place of residence is prohibited under Article 49 of the Fourth Geneva Convention, which also forbids deportations outside an occupied territory. Many Palestinian families and communities throughout the occupied West Bank, including East Jerusalem, are at risk of forcible transfer because Israeli practices have created a coercive environment that puts pressure on them to move, mainly through the unavailability of building permits, which are almost impossible to acquire. Although Bedouin and herders in Area C bear the brunt of this pressure, forcible transfer also takes other forms. The article below is part of a series of articles in the Humanitarian Bulletin highlighting a range of situations across the oPt where Palestinians have been placed at heightened risk of forcible transfer.

The case of Dkaika in southern Hebron 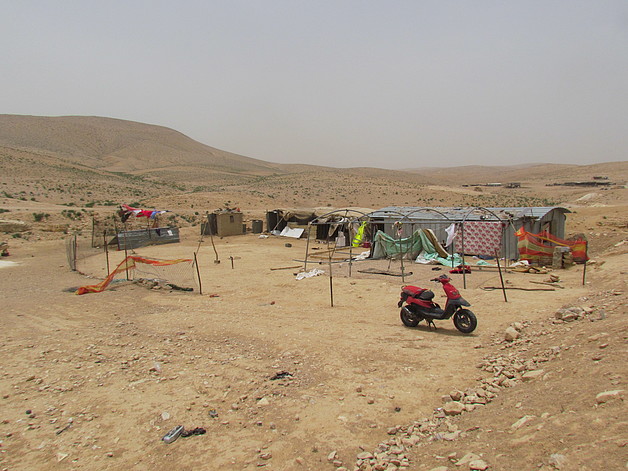 In early April 2016, the Israeli authorities informed the Israeli Supreme Court of their intention to “relocate” Dkaika, a small Bedouin community entirely located in Area C in southern Hebron, to a nearby Bedouin community and immediately demolish over 30 structures installed during the past two years. 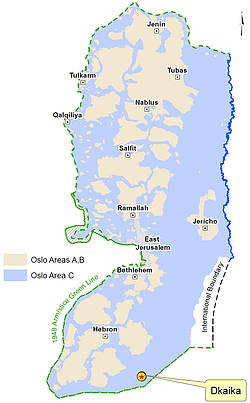 Most of the community’s homes and other structures have outstanding demolition orders issued by the Israeli Civil Administration (ICA) on the grounds that they lack building permits. However, these permits are nearly impossible to obtain due to the absence of an approved planning scheme. The inability to build legally has rendered the community extremely vulnerable and dependent on humanitarian assistance.

A draft planning scheme submitted by the community in 2012 with the support of two Israeli organizations (Rabbis for Human Rights and Bimkom – Planners for Planning Rights), was rejected in February 2014. According to the ICA planning committee, the existence of this “collection of structures” as a separate entity is “unsustainable” and residents should be relocated to another “residential fabric”.[1] The community challenged this decision in a petition to the Israeli Supreme Court and obtained an interim injunction freezing the demolition orders until a ruling is made on the case.

In its response to this petition, the authorities informed the Court that they are currently processing a planning scheme for three nearby Bedouin communities, one of which (Hamayda) may serve for the relocation of Dkaika, despite the community rejecting the alternative location because, among other reasons, it is located several kilometres away. The authorities agreed to extend the freezing of the 101 demolition orders issued prior to the filing of the petition, but demanded an immediate execution of 27 other orders (affecting 33 structures, half of them donor-funded) that were allegedly installed at a later date. These include residential tents and shacks, solar panels, water cisterns, animal shelters and kitchens.[2] The petition is still pending.

The community strongly opposes “relocation” and has requested protection and assistance in their current location, including adequate planning and permits for their homes and livelihoods. In a hearing before the ICA, community representative Odeh Najada stated: “Part of the discussion has been around the land property issue. We know who owns every centimetre of land. As long as I remember, I have been living in this place. We do not have any other land. We refuse to move to someone else’s land, or allow the entry of others to our land”. It is anticipated that the proposed “relocation” would impede access to traditional grazing land and undermine herding livelihoods.

The UN Secretary-General pointed out in similar cases among Bedouin and herding communities in the central West Bank and in Massafer Yatta (Hebron), the relocation of communities against their will, including as a result of the creation of a coercive environment, may amount to individual and mass forcible transfer.[3]

In April, the Israeli authorities demolished, dismantled or sealed 97 Palestinian structure across the West Bank, displacing nearly 200 people and otherwise affecting more than 570 people. Five of these structures were demolished on punitive grounds and the rest were demolished due to the lack of Israeli-issued building permits. Ninety percent of the destruction in April occurred in Area C. The number of structures targeted in the first four months of the year (595) has already exceeded the figure for all of 2015 (547). 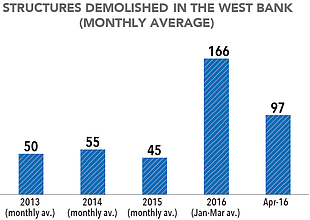 Almost a third of the structures demolished in April (30) had been previously provided as humanitarian assistance by aid organizations, including eight in the Bedouin communities referred to above in the E1 area, and worth more than 106,000 euros. This brings the number of aid structures demolished or confiscated in the first four months of 2016 to 170, an increase of almost 60 per cent compared to the figure for all of 2015.

Thirty-four (34) of the structures demolished in May, including 13 aid structures, were in the Area C herding community of Khirbet Tana (Nablus), which experienced its fourth wave of demolitions so far this year. The community, along with two Israeli settlement outposts, is located in an area designated as a “firing zone” for military training. Although these outposts have also been issued with demolition orders, very few have been executed in recent years.

Another 16 structures were demolished in five Palestinian Bedouin communities to the east of Jerusalem in Area C, located in an area planned for the expansion of the Ma’ale Adummim settlement (the E1 plan). These are part of 46 Bedouin communities in the central West Bank at risk of forcible transfer due to another “relocation” plan advanced by the Israeli authorities.