Rise in medical referrals out of Gaza, but decline in approval of exit permits

Ministry of Health (MoH) referrals of Gaza patients to non-MoH medical facilities have risen significantly in 2015: referrals from January-October are 17 per cent higher than the equivalent figure for 2014. By the end of 2015, the number of referrals out of Gaza is expected to exceed the historic high of 2014. However, actual access for these patients to the facilities to which they were referred has become more difficult due to lower approval rates for exit permits. 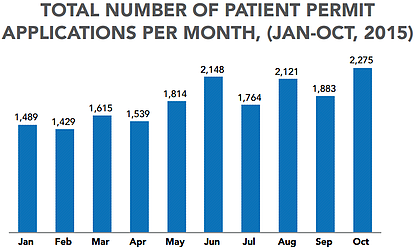 Patients are referred to non-MoH health facilities within the oPt, including East Jerusalem, and to a lesser extent to hospitals in Israel, Egypt and Jordan, when MoH facilities in Gaza cannot provide the necessary care. Dependence on referrals has risen in recent years as the public health system has weakened due to shortages of drugs, medical disposables and equipment; insufficient number of specialized health professionals; non-payment of salaries for employees recruited since 2007 by the de facto authorities; and insufficient electrical power and fuel. Almost nine in ten referrals are now to facilities outside of Gaza and rely on the Israeli and Egyptian authorities allowing access through the Erez and Rafah crossings.

Access to facilities in Egypt accounts for approximately seven per cent of referrals in 2015, but has become highly unreliable since July 2013, when Egypt limited the opening of the Rafah crossing. Since 24 October 2014, following an attack on Egyptian soldiers in the Sinai, the crossing opened partially on just 37 days, or about 10 per cent of the period, and has remained unopened for over the past 100 days. According to the Gaza authorities, as of the end of October 2015, over 25,000 people with urgent needs, including almost 500 patients referred to Egyptian hospitals, were registered and waiting to cross Rafah. 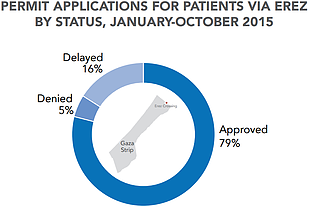 Patients referred to facilities in the West Bank (including East Jerusalem), Israel or Jordan must apply for permits from the Israeli authorities to exit via the Erez crossing. The largest monthly total of permit applications (2,275) since the imposition of the blockade in 2007 was recorded in October 2015. However, approval rates have declined significantly since August 2015, and dipped in October to less than 70 per cent of requests, the lowest since September 2009. Nevertheless, due to the increase in the number of applications, the absolute number of approvals during October also increased compared with previous months.

Eleven per cent of applications were rejected in October and 19 per cent were delayed, meaning that the patient had received no response by the date of their appointment, forcing them to seek a new appointment and resubmit their application. Of the 686 applications rejected or delayed during October, 416 were submitted on behalf of males (of which 81 were children) and 270 on behalf of females (of which 62 were children).

Challenges to imports of medical equipment

Although Israel’s list of restricted “dual use” items that could be used for military purposes does not include medical equipment, other Israeli restrictions on imports of medical equipment into the Gaza Strip remain a challenge. For example, on 14 July 2015, the World Health Organization (WHO) applied for the entry into Gaza of two computerized radiology machines procured by two healthcare facilities. WHO received confirmation on 4 August that the equipment would be allowed to enter. However, when WHO sought to coordinate their entry, it learned that the IT component of the machines required special approval from the Israeli Ministry of Communications, which took another three months to obtain. The machines finally entered Gaza on 9 November.

* This article was contributed by the World Health Organization (WHO)