In February 2016 a project was completed targeting water needs and supporting the resilience of vulnerable households, including IDPs, in Abassan Al Kabira, a town of about 28,000 people in Khan Younis governorate in the Gaza Strip. The project was implemented by Première Urgence Internationale (PUI), an international NGO, with funding provided by the Humanitarian Pooled Fund (HPF). In February, there were 15 ongoing projects financed by the HPF for a total of US$ 3.7 million, addressing urgent needs throughout the West Bank and Gaza Strip.

The eastern area of Khan Younis governorate was one of the hardest hit during the 2014 Israel-Gaza hostilities. Approximately 450 homes were totally destroyed or severely damaged in Abassan al Kabira and most of these are yet to be reconstructed.[1] Of particular concern are 340 displaced families living within or next to their destroyed/damaged homes, including in tents or caravans, in very precarious conditions.

As part of the PUI project, 200 of the most vulnerable displaced families were provided with water meters and connected to the municipal water network. Among the targeted families, 50 displaced households also received small water pumps to transport water to storage containers on the roof. Additionally, women from beneficiary households participated in a series of awareness workshops addressing good hygiene practices, reducing the risk of water contamination and safe water storage. Each workshop participant also received a hygiene kit and a one cubic meter water tank for storage purposes. 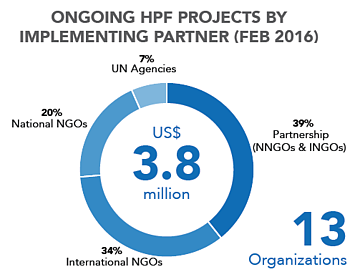 The 2014 hostilities also caused widespread damage to the water infrastructure serving Abassan al Kabira. Compounded by previous weaknesses in the network and water leakage resulting from it, the war rendered the majority of households in the town dependent on private water vendors, further stretching their limited socioeconomic capacities. During the project, 23 water networks in the town were repaired or replaced, and three new water networks were constructed under the supervision of municipality engineers and PUI’s civil engineer, serving 3,442 households.

The project also included a cash-for-work component. This entailed the employment of 50 beneficiaries, almost all IDPs, in various tasks, thus supporting the resilience of vulnerable IDP households. 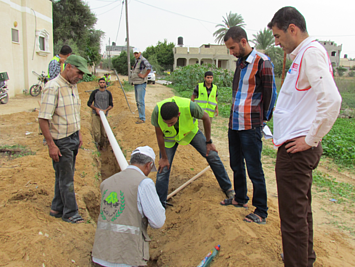 Gaza’s water, wastewater resources and infrastructure were already critical prior to the 2014 conflict. Gaza relies on the underlying Coastal Aquifer as its only water source, but systematic over-extraction has resulted in the intrusion of seawater and the emergence of the underlying saline water, leaving 96 per cent of the water from the aquifer unfit for human consumption. Some 40 per cent of the population receive water for 5-8 hours only once every three days and 60% resort to private, unregulated water suppliers, with lower and largely unmonitored hygiene standards, exposing them to severe public health risks.[2] The chronic electricity and fuel deficit also disrupts the delivery of basic WASH services, affecting more than 280 water and wastewater facilities. In total, 23 per cent of the population in Gaza are still not connected to the sewage network. These problems have been aggravated in recent years by Israeli restrictions on the entry of goods through the blockade. As many as 23 WASH items such as pumps, drilling equipment and disinfectant chemicals are on the Israeli ‘dual use’ list, meaning that their entry into Gaza is only permitted selectively.

[2] EWASH Advocacy Note on impact of power cuts on the WASH sector in Gaza, 2015