Good afternoon. Members of the media, donors, national partners; thank you for coming. 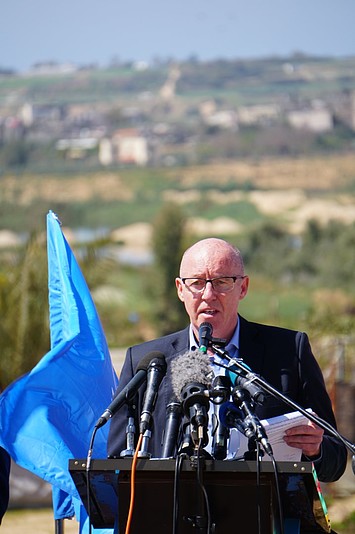 Today, I am pleased to be in Gaza for the launch of the Humanitarian Response Plan (HRP) for 2018, which took place earlier today at an event with the donor community, where I was joined by the Minister of Social Development of the State of Palestine, H.E. Dr. Ibrahim Al-Shaer, by video link from Ramallah. I am also pleased to be joined today by colleagues from UNRWA and the UN agencies and NGOs that are leading the humanitarian response in the oPt.

The 2018 humanitarian plan aims to support the needs of 1.9 million Palestinians in the occupied Palestinian territory, or oPt. It exists in the context of one of the world’s most long-standing protection crises, which remains directly tied to the impact of Israel’s occupation, which marked its 50th year in June 2017, alongside –in the Gaza context – internal Palestinian divisions and Egypt’s closure of Rafah crossing.

This year, we are especially pleased to co-launch the appeal in Gaza with the State of Palestine. In so doing, we are sending a strong message of our joint commitment to improving the humanitarian situation for Gaza’s nearly 2 million Palestinian residents, over half of them children.

There is no place more fitting to launch the humanitarian plan than Gaza, where we see a man-made traegdy unfolding daily. Today, Gaza is on the brink of catastrophe and humanitarian needs run deep. Ten (10) years of intensified movement and access restrictions, recurrent escalations of hostilities, alongside internal Palestinian divisions and closure of Rafah, have left 70 per cent of the population reliant on international aid. Some 40 per cent of Gaza’s households fail to meet international standards for food security; unemployment stands at nearly 47 per cent, due largely to a crippled economy, limited by restrictions on movement of people and goods, and an energy crisis that leaves people without electricity up to 20 hours a day.

Without donor-funded emergency fuel distributed to critical water, sanitation and health facilities, we would face a total systems collapse, with the result, a humanitarian disaster. Even with support, 40 per cent of the population receives just 4 to 6 hours of water supply, every 3 to 5 days, and over 100 million litres of sewage – nearly all of it raw –flows into the sea each day. Access to healthcare, a basic human right, is denied to thousands, due to a lack of drugs, equipment and expertise available in Gaza, compounded by significant difficulty to exit the Strip to receive treatment elsewhere.

Our location today encapsulates so many of the challenges facing Palestinians in Gaza:

In the West Bank, the volume of needs are less, but no less serious or urgent. Movement and access restrictions, often in the context of Israeli settlement activity, and discriminatory planning and zoning policies, have fragmented the territory, resulting in destroyed homes and livelihoods. The combined impact of a number of policies has created for many Palestinians, in areas like Area C, East Jerusalem and the Israeli-controlled part of Hebron city, a coercive environment that pressures them to leave and generates a risk of forcible transfer.

Some 270,000 Palestinians in Area C are directly affected by Israeli restrictions and control over water and sanitation infrastructure. 350,000 people in the West Bank are vulnerable to settler violence and over 260,000 people, including Palestine refugees, are in need of humanitarian healthcare. Access to education is heavily compromised by an increase in education-related violations, affecting almost 40,000 students and teachers.

Against this worrying backdrop of needs in the oPt, the massive funding crisis faced by UNRWA, one of the main service providers and a main employer, particularly in Gaza, should be of concern to everyone, not just Palestine refugees.

Overall, the 2018 humanitarian plan appeals for US$ 539.7 million to address urgent humanitarian needs in the areas of protection, food security, health, water and sanitation, shelter and education.  Of the request, 75 per cent targets Palestinians in Gaza. Half of the overall amount is for UNRWA emergency projects.

If funding is secured, humanitarian actors will be able to:

Without sufficient funding, none of this can be achieved; we will be unable to mitigate the worst impacts of the ongoing crisis and we risk growing needs and further deterioration, particularly in Gaza, where the situation is already extremely fragile. It is, therefore, critical that this appeal be strongly supported.

This year’s humanitarian plan is part of a three-year strategy, designed to improve the links between our humanitarian programming and other strategies, including those related to development efforts, while longer-term solutions are pursued.

It is also designed to allow time for strategic advocacy, including with political actors, considering that humanitarian aid alone will not, and cannot, improve the situation for Palestinians. Only political action resulting in policy changes that will allow the economy to improve, development activity to take place, and residents to realize their human rights, can do this.