The Palestinian Ministry of Agriculture (MoA) announced that 3 October is the official start of the olive harvest season. The annual olive harvest is a key economic, social and cultural event for Palestinians. Approximately half of the agricultural land in the oPt is planted with eight million olive trees, the majority (94 per cent) of them in the West Bank. The olive oil industry makes up 25 per cent[1] of the agricultural income of the oPt and estimates suggest that about 100,000 families depend to some extent on the annual olive harvest for their livelihoods.[2]

Production levels of olive oil can range from 34,000 tons in a good year to 6,000 tons in a bad year, depending on the yield.[3] This year’s season is expected to be a relatively low yield and the MoA projects production of 13,000 tons of oil, almost the same as the amount produced last year.[4] The low level anticipated is attributed by the MoA to the scarcity of rainfall during the past winter and the fluctuations in temperature during the spring season that led to a significant loss of blossom at the start of the season.[5]

Israeli access restrictions to olive groves located behind the Barrier or in close proximity to Israeli settlements continue to pose challenges for Palestinian farmers. These restrictions impede essential agricultural activities needed to maintain the olive groves throughout the year, such as ploughing, pruning, fertilizing, and pest and weed management, with a negative impact on olive productivity and value. Data collected by OCHA in the northern West Bank since 2010 suggest that the yield from olive trees located in the area between the Barrier and the Green Line has fallen by approximately 60 per cent compared with the equivalent trees on the ‘Palestinian’ side of the Barrier.[6]

During September, the Israeli Civil Administration (ICA) coordinated with the Palestinian District Coordination and Liaison Offices (DCL) in the West Bank in preparation for the forthcoming olive season, including the opening of agricultural gates along the Barrier. As in the 2013 olive harvest, there were 81 gates designated for agricultural access. Of these, only nine open daily, while an additional nine open for some day(s) during the week in addition to the olive season; the majority of them, 63, only open during the olive season. While the opening times of each gate are yet to be announced, the ICA notified the Palestinian DCL that in certain areas the gates will be opened only after 20 October due to the Jewish holidays. 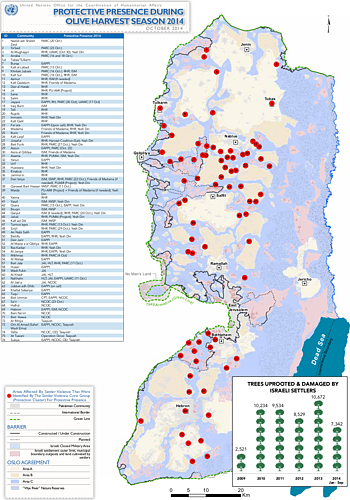 Acts of intimidation, harassment and violence by Israeli settlers against Palestinian farmers and their land and properties also undermine rural livelihoods on a regular basis. This year, incidents of settler violence resulting in Palestinian casualties and the number of injured Palestinians have increased in comparison with the same periods in 2013 and 2012. However, the number of incidents resulting in damage to trees and the number of damaged trees have decreased compared with 2013: between January and September 2014, a total of 7,342 olive trees were reportedly vandalized by Israeli settlers compared with 8,615 and 6,565 in the equivalent periods of 2013 and 2012 respectively. This decline can be partially attributed to the massive deployment of Israeli forces across the West Bank, particularly since June, in military operations and fewer trees left to vandalize.[7] Destruction and damage to productive trees by settlers, particularly olive trees, have a cumulative and detrimental impact on the livelihoods of Palestinian families and communities and impose significant economic costs for olive-owning households.

For the past three years, the Protection Cluster, through the OHCHR-chaired Core Group on Settler Violence, has actively supported Palestinians farmers and their families during the olive harvest by providing a coordinated protective presence, referring cases of settler violence for protection, and supporting advocacy initiatives around the olive harvest. Efforts this year have included all of the above. So far Protection Cluster members, namely UN agencies plus Palestinian, Israeli and international organizations, have jointly identified 84 locations across the West Bank most affected by settler violence and in need of a protective presence. The Core Group coordinates coverage of these locations by the 14 organizations providing a protective presence during the harvest. These protective presence organizations and other partners report incidents to OHCHR to ensure a timely protection response, including legal aid, psychosocial support and the documentation of settler violence for public reporting.

[2] This includes 80,000 households who own land holdings containing olive trees according to the PCBS, WFP, FAO and UNRWA’s SEFSec 2012 survey, in addition to 20,000 waged labourers and households who work under sharecropping arrangements during the annual olive harvest.