Published as part of
The Monthly Humanitarian Bulletin | September 2019

Recent statements by both Israeli and Palestinian officials have called into question the 25-year old division of the West Bank into Areas A, B & C, established as part of the 1990s Oslo Accords. On the one hand, Israel’s Prime Minister declared his intention, if re-elected, to “apply Israeli sovereignty over the Jordan Valley and the northern Dead Sea” as a first step to the formal annexation of all Israeli settlements in Area C. On the other hand, Palestine’s Prime Minister stated that the A, B & C division is no longer valid and issued a directive to expand Palestinian master planning in Area C. It still remains unclear if these announcements will be implemented and what the humanitarian impact would be.

In the meantime, as highlighted by one of this month’s Bulletin articles, there has been an acceleration in Israel’s destruction of Palestinian property, in both Area C and East Jerusalem, citing a lack of building permits. By end-September, some 550 Palestinians, half of them children, have lost their homes and been displaced, exceeding the number of people displaced in all of 2018; tens of thousands have also been adversely affected by the destruction of their animal shelters, water cisterns and networks, agricultural roads, commercial structures, and other properties. 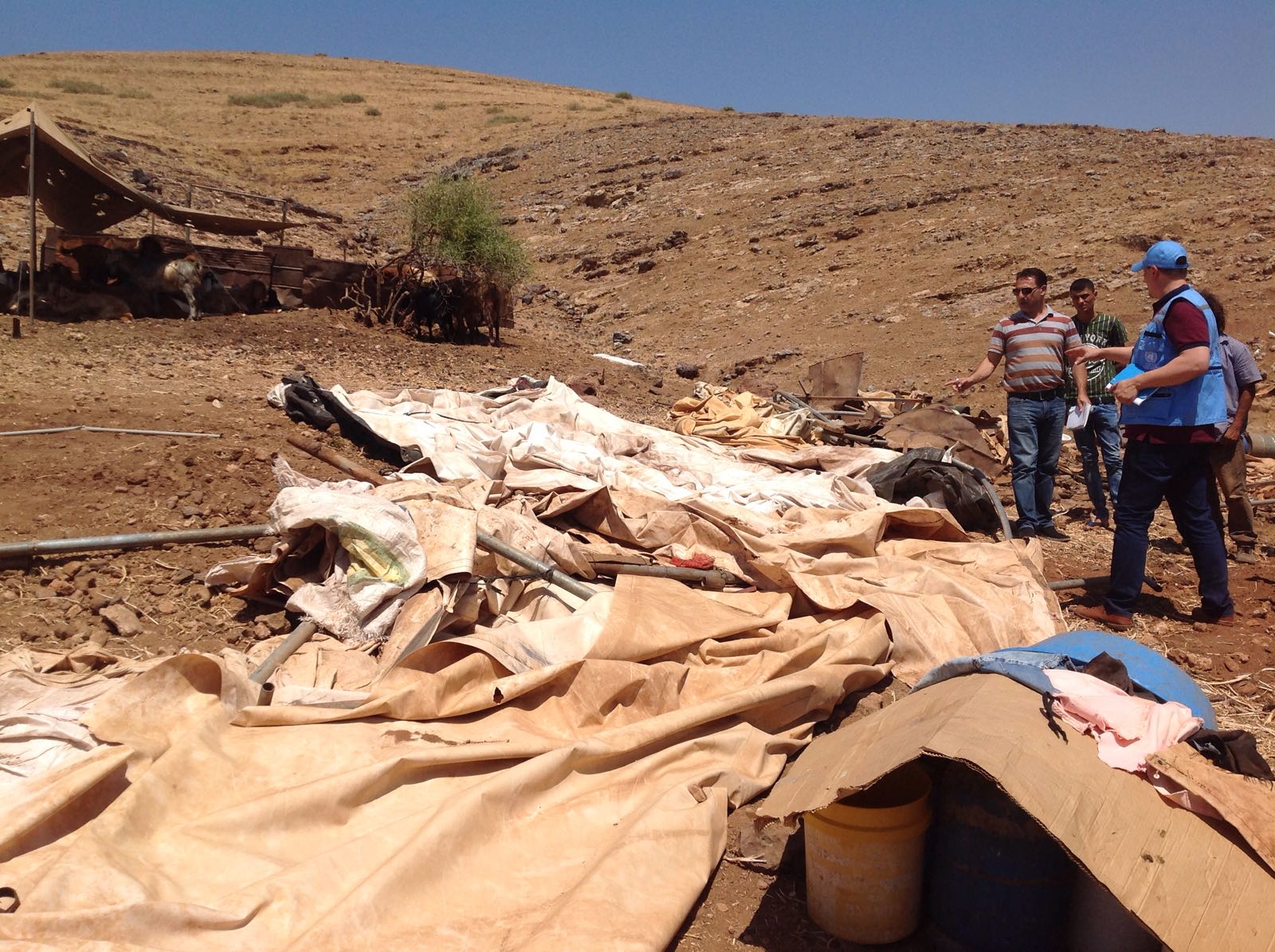 The humanitarian community provides protection and assistance to households and communities affected by demolitions through an inter-agency response mechanism coordinated by UNOCHA. The aid delivered varies, depending on the findings of an initial needs assessment conducted within 48 hours of a demolition and it may include emergency shelter, cash assistance, animal shelters, water and sanitation items, food, psychosocial support, and legal aid. It is estimated that more than 90 per cent of families affected by demolitions remain in their communities, in part due to the aid provided through this mechanism.

Regarding the Gaza Strip, a report submitted this month by UN Office of the Special Coordinator to the highest-level coordination forum for oPt donors (the Ad Hoc Liaison Committee or AHLC) warns about the fragile situation of Gaza’s health system, which continues to suffer from severe shortages of infrastructure, equipment, medical supplies and personnel, alongside continuous restrictions on patients referred to medical treatment outside Gaza.

One of the areas affected by this precarious situation is maternal health, the subject of another article in this Bulletin. So far in 2019, as many maternal deaths have been reported than in all of 2018. Continued shortages of essential life-saving maternal and child health pharmaceuticals have increased the risk of disability and death among pregnant women and newborns. The percentage of essential medicines with less than a month’s supply increased from 38 per cent in 2017 to 46 per cent in 2018, reaching 50 per cent in August 2019.

The shortage of drugs in Gaza has been partly driven by the chronic budgetary deficit affecting the Palestinian Authority (PA), which is responsible for the supply of drugs and disposables in Gaza. This deficit has been exacerbated over the past six months by Israel’s decision to deduct from the VAT revenues it collects on behalf of the PA the allowances that the PA pays to prisoners, and the PA’s refusal to receive less than the full amount. However, media reports from early October indicate that the PA has agreed to resume receiving the revenues under Israel’s conditions, starting with a $430 million immediate transfer.

“The question as we approach 2020 is not whether Gaza is liveable, but how much longer can it exist on the life support that the UN and international partners are providing.”

As highlighted by the UN report to the AHLC, donors’ support to Gaza in recent months has helped to reduce violence and lessen the impact of the ongoing humanitarian and economic crises. However, “these efforts were not designed to be open-ended and must be followed by a focus on addressing the political challenge of intra-Palestinian reconciliation, sustained investment by the international community, a significant relaxation of Israeli movement and access restrictions and a renewed commitment by the Palestinian Government to facilitate assistance. The question as we approach 2020 is not whether Gaza is liveable, but how much longer can it exist on the life support that the UN and international partners are providing.”