The continuation of the electricity crisis and the lack of funding for WASH interventions have rendered 1.45 million people in the Gaza Strip at risk of contracting waterborne, diseases, including as a result of flooding. Despite the evacuation of settlers from privately-owned Palestinian land, which was taken over or officially seized for the establishment or expansion of settlements, the Palestinian owners continue to face severe restrictions in accessing their land. 171 Palestinians in four herding communities in the northern Jordan Valley are at risk of forcible transfer, following the approval of demolitions by the Israeli High Court of Justice. Despite the positive developments regarding the Fatah and Hamas reconciliation agreement, it has not led, so far, to the reversal of the measures that triggered the latest deterioration in the humanitarian situation in Gaza.

On 1 November, the Hamas authorities handed over control of the Erez, Kerem Shalom and Rafah crossings to the Palestinian Government of National Consensus. This is the most significant practical step so far towards the implementation of the reconciliation agreement signed by Fatah and Hamas on 12 October 2017, with Egyptian facilitation. The agreement points the way to a possible end to the decade-long internal Palestinian divide and to an improvement in living conditions in the Gaza Strip, including a potential lifting of the Israeli blockade.

Ongoing electricity outages of 18-20 hours a day across the Gaza Strip throughout September and October continue to undermine the provision of basic services. In the water, sanitation and hygiene sector (WASH), sustained efforts by humanitarian agencies to provide 154 critical facilities with emergency fuel to run backup generators resulted in a limited improvement in some key indicators during September compared with previous months. There was a modest increase in the quantity of piped water supplied to households and in the functioning of desalination plants, plus a slight decline in the contamination levels of sewage discharged to the sea. Nevertheless, September indicators remain well below the already poor standards recorded during the first quarter of 2017. 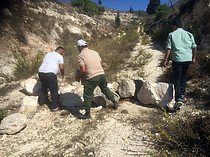 The seizure of privately owned Palestinian land to establish and expand Israeli settlements has been a common phenomenon from the beginning of the Israeli occupation. In recent years, these actions have been conducted primarily by Israeli settlers without an official permit or authorization, but often with the acquiescence and active support of the Israeli authorities. The resulting loss of property and sources of livelihood, restricted access to services, and a range of protection threats have triggered demand for assistance and protection measures by the humanitarian community. 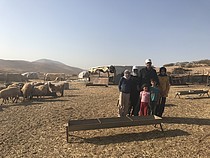 In October, legal cases filed with the Israeli HCJ in relation to four Palestinian communities in the northern Jordan Valley ruled in favour of demolitions due to lack of building permits, which are rarely granted by the Israeli authorities for Palestinians. Consequently, more than 200 structures, 26 per cent of which were donor-funded, in the communities of Makhul, Humsa al-Baqai’a, al Farisiya-Ihmayyer and al Farisiya-Nabe al Ghazal are under threat of demolition. An estimated 171 people, over 50 per cent of whom are children, are at imminent risk of displacement. Demolitions or the threat of demolitions, along with discriminatory planning policies that make it near impossible for Palestinian residents of Area C to obtain authorization for construction, are among the Israeli policies identified by the Secretary-General as generating a coercive environment that puts pressure on Palestinians to leave their communities and creates a risk of forcible transfer.