18 Palestinians killed and 1,400 injured by Israeli forces in the Gaza Strip, the majority during demonstrations at the perimeter fence; concern over possible excessive use of force by Israeli soldiers. Some 22,000 people in Gaza are still displaced from the 2014 hostilities, primarily due to the lack of funding for reconstruction, and are living in precarious conditions and constant uncertainty. Seasonal expansions of the permitted fishing areas in Gaza have significantly increased the total catch, but this remains limited to low-value sardines; concern over the methods used to enforce access restrictions remain. The operation of mobile health clinics in 35 vulnerable communities in the West Bank has been halted, and is at risk in another 154 communities, due to severe funding gaps.

In what amounted to the highest number of casualties in a single day in the Gaza Strip since the 2014 hostilities, on 30 March, 18 Palestinians were killed by Israeli forces (or died of wounds sustained that day), and another 1,400 were injured, including over half of them by live ammunition, according to the Palestinian Ministry of Health (MoH). The Israeli authorities accused the MoH of inflating the number of wounded by live ammunition. No Israeli casualties were reported. The majority of the casualties occurred in the context of the first in a series of mass demonstrations, organized as part of the ‘Great March of Return’ and scheduled to take place near the perimeter fence with Israel, between 30 March (‘Land Day’) and 15 May, the 70th anniversary of what Palestinians refer to as the 1948 ‘Nakba’.

The hostilities between Israel and Palestinian armed groups from 7 July to 26 August 2014 were the most devastating in the Gaza Strip since the start of the Israeli occupation in 1967. In addition to the 1,460 Palestinian civilians killed, including 556 children,3 some 17,800 housing units were destroyed or severely damaged, causing approximately 100,000 internally displaced persons (IDPs). Three and a half years after the ceasefire, more than 22,000 people (4,162 families) are still displaced (as of the end of February 2018).4 As highlighted below, many of them continue to live in precarious conditions with uncertainty regarding their immediate future.

In 1994, a permitted fishing range of 20 nautical miles (NM) was agreed between Israel and the Palestinian Liberation Organization (PLO). In practice, Israel only allowed fishing up to 12 NM until 2006, when the fishing zone was reduced to six and later to three NM. According to the Israeli authorities, “Hamas has established naval forces with significant military capabilities, as seen during operation “Protective Edge” when Hamas naval commando infiltrated Israel and were detected near an Israeli village. This situation required Israel to tighten its security restrictions at sea to prevent similar future attacks.” 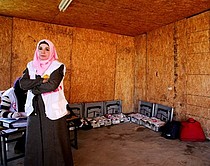 Over 220,000 Palestinians living in 189 communities across the West Bank lack a permanent clinic and face critical challenges in accessing basic health services. These communities include, primarily, those located in Area C, in the Israeli-controlled parts of Hebron city (H2), and in the closed areas behind the Barrier (the Seam Zone). In many of these areas, the journey to the nearest clinic has lengthened because of the need to travel circuitous ways around settlements and barriers. Access to healthcare can be hampered by the unavailability or high costs of transportation, and in some communities, access to emergency services is challenging as even ambulances face delays.