All structures in Khan al Ahmar - Abu Al Helu, a Palestinian Bedouin community in the Jerusalem governorate, were served with final demolition orders, increasing the risk of a mass forcible transfer. Largest seawater desalination plant in Gaza inaugurated and expected to serve 275,000 people, less than 15% of Gaza’s population. Key measures by humanitarian organizations can mitigate the humanitarian  impact of de facto settlement expansion. Eight years after the 2008-2009 (Cast Lead) hostilities in Gaza, victims are still bearing the consequences while lack of accountability persists. 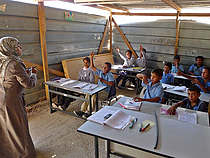 On 28 February 2017, the Israeli State Comptroller released the findings of its investigation into decision-making by the Israeli Cabinet prior to the 2014 hostilities in the Gaza Strip. According to the report, the Cabinet ignored the deteriorating humanitarian situation in Gaza, despite early warnings provided by the military, particularly regarding the state of Gaza’s infrastructure. Addressing issues such as the hardship in Gaza ahead of time, according to the State Comptroller, “could have probably prevented the escalation”. 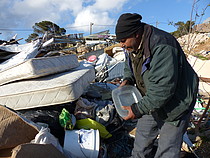 Since the beginning of 2017, a number of developments have generated additional pressure on Palestinian Bedouin communities located within and around the area designated by the Israeli authorities for the E1 settlement plan and the expansion of Ma’ale Adumim settlement in eastern Jerusalem governorate. The 18 communities in this area belong to a larger group of 46 Bedouin communities in the central West Bank, which the Israeli authorities seek to “relocate” to three designated sites.

In the Gaza Strip more than 95 per cent of the water extracted from the aquifer lying underneath it is unfit for human consumption. This stems mainly from long-standing over-extraction, compounded by infiltration of raw sewage and seawater. Chloride and nitrate levels in the water extracted in most areas exceed the levels recommended by the World Health Organization (WHO) for potable water by up to eight times. As Gaza’s population continues to grow, a 2012 UN report predicted that water demand in Gaza would increase by 60 per cent by 2020, while damage to the aquifer may become irreversible.

Accountability for violations of international humanitarian law and human rights law by all sides during successive hostilities in Gaza is an urgent priority. Failure to ensure effective accountability for lives lost, homes destroyed and damage wrought fuels a culture of impunity that can lead to further violations. Eight years after the 2008-2009 (Cast Lead) hostilities in Gaza, victims are still bearing the consequences while lack of accountability persists. 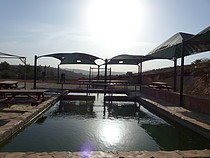 The three cases highlighted in this study describe the ongoing efforts by Israeli settlers to increase their spatial control over surrounding areas and natural resources through the development of new infrastructure and activities, alongside attempts to remove a Palestinian presence.