In the Gaza Strip more than 95 per cent of the water extracted from the aquifer lying underneath it is unfit for human consumption. This stems mainly from long-standing over-extraction, compounded by infiltration of raw sewage and seawater. Chloride and nitrate levels in the water extracted in most areas exceed the levels recommended by the World Health Organization (WHO) for potable water by up to eight times. As Gaza’s population continues to grow, a 2012 UN report predicted that water demand in Gaza would increase by 60 per cent by 2020, while damage to the aquifer may become irreversible.[1]

Aware of the dangers of consuming tap water, nine out of ten people in Gaza rely on desalinated trucked water, at least for drinking and cooking purposes. Over 80 per cent of desalinated water currently available in Gaza is produced by the private sector based on groundwater.[2] Reliance on this source for domestic water consumption poses a heavy financial burden on already impoverished families and can be 30 times more expensive than water supplied through the network. Moreover, this source also poses a health hazard: studies show that nearly 70 per cent of privately produced desalinated water has some level of contamination, despite recent efforts led by the Palestinian Water Authority (PWA) to monitor its quality.[3] 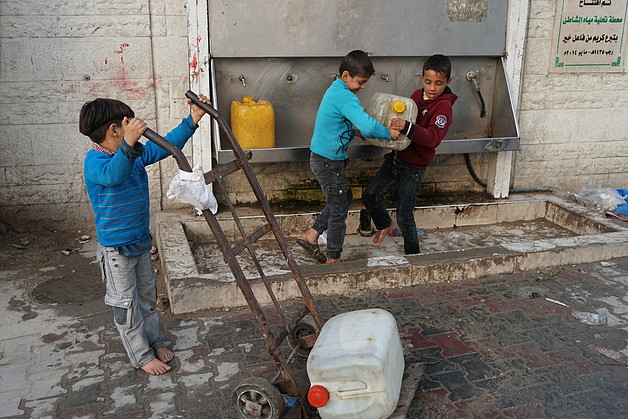 To mitigate this situation, UNICEF, with financial support from the European Union, led a project for the construction of Gaza’s largest seawater desalination plant. The plant, located in Deir al Balah, was officially inaugurated on 19 January 2017, but at the end of February it was running only on a partial/ad hoc basis powered by emergency fuel funded by the Humanitarian Fund. It will initially produce 6,000 cubic meters of desalinated water a day, with a projected target by 2020 of more than three times this volume (approximately 20,000 cubic meters a day), serving 275,000 people in Rafah and Khan Younis with 90 litres of safe drinking water per capita per day.

The appropriateness and environmental sustainability of materials used for the project had to be taken into account, along with the import restrictions imposed by Israel on items classified as “dual use” and a security concern. A monitoring mechanism was agreed and an official channel of communication with the Israeli Ministry of Defence was set up to ensure the regular supply of materials to the plant despite restrictions.

The plant adopted an energy efficient and innovative desalination technique that allows pumps to operate under medium voltage electricity rather than high voltage, which is not available in Gaza.[4] Solar systems installed on the roofs of structures will generate up to 12 per cent of the peak power requirement of the plant (1.2 megawatts). A feasibility study conducted by the EU identified options to further expand the share of renewable energy by up to 80 per cent. Additionally, the use of closed-circuit television to assess the condition of long disused pipelines resulted in significant cost savings.  Finally, UNICEF is also conducting an awareness campaign for users about the value of desalinated water.

* This article was contributed by UNICEF.

[2] AFD, Public-Private-NGO Partnership for Adaptation to the Drinking Water Crisis in the Gaza Strip - Concept Paper - May 2016, p.1.

[3] Survey of Private and Public Brackish Desalination Plants in Gaza Strip which will Provide the Necessary Data and Information to Improve the Drinking Water Supply in the Gaza Strip, CEP, PWA, GiZ, September 2015.

[4] The performance requirements for energy consumption of the plant is set at a maximum of 4kW per cubic meter of desalinated water.