Unless additional funds are provided, fuel reserves for the 186 most critical health, water and sanitation facilities in the Gaza Strip will be exhausted in June. Aerial spraying of herbicides along Gaza’s perimeter fence compounds the impact of access restrictions and regular incursions on agricultural livelihoods. Construction of a bypass road on Palestinian land in Qaliqliya area is expected to impact on the agricultural and commercial livelihoods of one village. Concern over the tightening of the permit and gate regime restricting farmers’ access to agricultural land behind the Barrier, in the northern West Bank.

The humanitarian vulnerability of Gaza’s population has been exacerbated by recent developments, which deepened the internal Palestinian divide, ongoing since the takeover of the Gaza Strip by Hamas in 2007. In March 2017, Hamas established a parallel institution to run local ministries in Gaza, a step seen as a direct challenge to the Palestinian government in Ramallah. In April, the Palestinian government reduced payments to thousands of public employees in the Gaza Strip. Subsequently, the failure to resolve a longstanding dispute between the two Palestinian authorities on issues related to tax exemption for fuel and revenue collection from electricity consumers, resulted in Gaza’s sole power plant (GPP) being forced to shut down completely. Compounded by a halt in the electricity supply from Egypt due to malfunctioning lines, this has triggered electricity blackouts of 20-22 hours a day.

Gaza plunges into darkness: Severe deterioration in the energy situation

On 17 April, Gaza’s sole power plant (GPP) was forced to shut down completely after exhausting its fuel reserves and being unable to replenish them due to a shortage of funds. The shutdown occurred in the context of an ongoing dispute between the Palestinian authorities in Gaza and Ramallah on tax exemption for fuel and revenue collection from electricity consumers.

Palestinian farmers in the Gaza Strip reported that in early April 2017, Israeli airplanes sprayed their farming land located along the perimeter fence with Israel with herbicides. The scope of land and farmers affected is yet to be assessed. 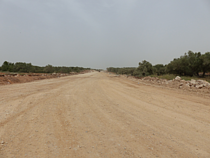 The construction of a new 2.5 km-long road on Palestinian land is currently underway by the Israeli authorities; it will bypass a section of Road 55 running through An Nabi Elyas village (Qalqiliya). Construction has already had an impact on livelihoods and the property rights of the village residents (approx. 1,500), and the negative impact is expected to increase once the road is complete. At least two additional bypass roads are reportedly planned by the Israeli authorities along Road 60: one road is next to Huwwara village (Nablus) and the other is next to Al Arrub Refugee Camp (Hebron).

Increased restrictions on access to agricultural land behind the Barrier

In recent months, increased restrictions have been reported in the northern West Bank which are aﬀecting the access of farmers to their agricultural land isolated by the Barrier. These restrictions relate to a minimum area of land and land ownership documents required before Palestinian landowners can apply for permits to cross the Barrier. Although these restrictions have been included in previous ‘Standing Orders’ published by the Israeli authorities, which detail the regulations governing access to areas behind the Barrier, the concern is that stricter application of regulations will further restrict Palestinian access to agricultural land and livelihoods in Barrier-aﬀected areas.