Increased restrictions on access to agricultural land behind the Barrier 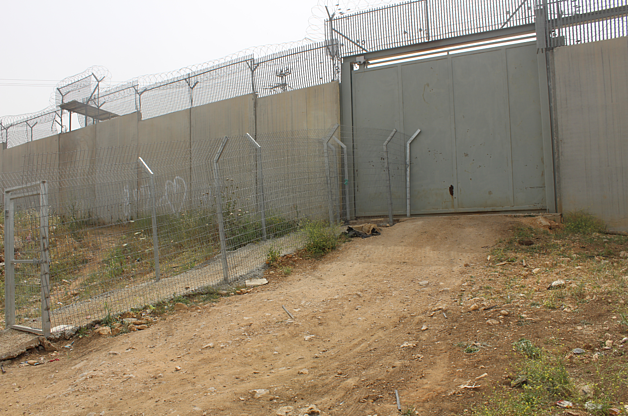 In recent months, increased restrictions have been reported in the northern West Bank which are aﬀecting the access of farmers to their agricultural land isolated by the Barrier. These restrictions relate to a minimum area of land and land ownership documents required before Palestinian landowners can apply for permits to cross the Barrier. Although these restrictions have been included in previous ‘Standing Orders’ published by the Israeli authorities, which detail the regulations governing access to areas behind the Barrier, the concern is that stricter application of regulations will further restrict Palestinian access to agricultural land and livelihoods in Barrier-aﬀected areas.[1]

In the northern West Bank, the land between the Barrier and the Green Line, the “Seam Zone,” was declared closed by military order in October 2003. All non-resident Palestinians above the age of 12 who need to enter this area, including for agricultural purposes, are required to obtain a special permit.[2] To apply or renew a permit, the applicant must satisfy the security considerations necessary for all Israeli-issued permits. Many farmers are rejected on those grounds, without further explanation.

Applicants must also prove a connection to the land in the closed area by submitting valid ownership or land taxation documents. Some applicants are rejected on the grounds of ‘no connection to the land’ or ‘not having enough land.’ In the West Bank, the majority of land is not formally registered and ownership has been passed over generations by traditional methods which do not require formal inheritance documentation, but still constitutes a major source of income for succeeding generations. OCHA monitors the rate of permit applications, particularly during the annual olive harvest when, according to the Israeli authorities, “recognizing the uniqueness and signiﬁcance of the olive harvest season, agricultural employment permits beyond the set quota can be requested for members of the farmer’s family.”[3] In the northern West Bank, the approval rate for permit applications increased from 46 per cent in 2015 to 58 per cent in the 2016 harvest, totaling 6,707 approvals. Despite the increase, some 4,700 applications by farmers for this olive harvest were rejected.

In February 2017, a number of Palestinian District Civil Liaison Oﬃce (DCL) oﬃces in the northern West Bank (Jenin, Qalqiliya, Tulkarm and Salﬁt) reported that they had been informed by their Israeli counterparts that registered owners with less than 330m2 of land are ineligible for a permit. The new regulations were not communicated oﬃcially but in conversations between the Israeli DCL and their Palestinian counterparts. If rigorously applied, the full impact of the measure on the already restricted pool of permit holders will only become apparent gradually as existing permits expire: it is estimated that some 55 per cent of current permits will expire in the four northern West Bank governorates during the course of 2017. In protest at the new regulations, the Palestinian DCL oﬃces are refusing to accept applications for new or renewed permits, and are redirecting them to the Israeli DCL oﬃces, who in turn are refusing to accept the applications. 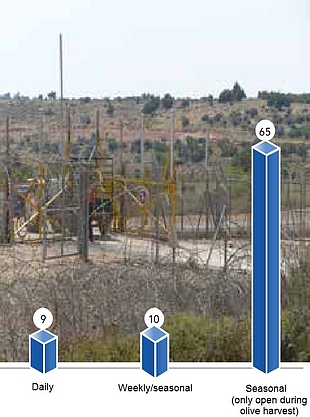 with the restricted number and opening times of the Barrier gates, have severely curtailed agricultural practices and undermined rural livelihoods throughout the West Bank.[4]

In addition to restricted or erratic opening hours, gates can also be closed indeﬁnitely. The Beit Amin gate (1447) in Qalqiliya, which opened daily to serve between 100-200 farmers, has been closed since January 2017. Famers are being re-directed to another gate, normally reserved for military purposes, some 5.5 kilometres away, adding considerably to the length of time farmers require to reach their land.

The case of Ahmad

Ahmad (pseudonym), a farmer from Izbat Salman in the Qalqiliya area, is 43-year-old father of three. The most fertile area of his 200 dunums of land, about 40 dunums, was destroyed during the construction of the Barrier in 2013, including lemon trees and greenhouses. Between 2003 and 2010, he was repeatedly refused a permit on security grounds, despite having never been arrested. Thereafter, a permit was granted for land registered within his father’s land for varying periods of six months to one year. In 2015 he bought a new plot of land comprising 45 dunums behind the Barrier. Although the new plot is registered in his name, he is unable to apply for permits for family members or additional workers due to the current situation of non-cooperation in the Palestinian and Israeli DCLs.

The case of Basim

Basim (pseudonym), a farmer from Beit Amin, grows 25 dunums of za’atar (thyme), a herb widely used in Palestinian cuisine, on his land behind the Barrier. The crop is his main source of income with each three-month harvest worth $ 9,700. The closure of the Beit Amin gate has forced him to hire a taxi to take him to the alternative military gate and he then has to walk several kilometres along the Barrier patrol road to reach his land. B can now access his land less frequently and estimates that he has lost approximately half of his income since the new gate arrangements were introduced.

In 2002, the Government of Israel approved construction of a Barrier with the stated purpose of preventing violent attacks by Palestinians in Israel. However, 85 per cent of the route does not follow the internationally recognized 1949 Armistice (Green Line), instead deviating inside the West Bank, including East Jerusalem. The inclusion of Israeli settlements behind the Barrier, citing security concerns, was the single most important factor behind the deviation of the route from the Green Line.

In 2004, the ICJ, the International Court of Justice (ICJ) issued an Advisory Opinion on the Legal Consequences of the Construction of a Wall in the Occupied Palestinian Territory. The ICJ stated that the sections of the Barrier route which run inside the West Bank, including East Jerusalem, together with the associated gate and permit regime, violated Israel’s obligations under international law. The ICJ called on Israel to cease construction of the Barrier ‘including in and around East Jerusalem’; dismantle the sections already completed; and ‘repeal or render ineﬀective forthwith all legislative and regulatory acts relating thereto.’[5]

[1] The most recent version of the Standing Orders, the ﬁfth, was published in March 2017, in Hebrew only.

[2] In January 2009, the closed area designation was extended to all or part of areas between the Barrier and the Green Line in the Salﬁt, Ramallah, Bethlehem and Hebron districts, plus to various areas between the Barrier and the Israeli-deﬁned municipal boundary of Jerusalem. A petition dating back to the introduction of the permit regime in 2003 and challenging the legality of the Barrier permit regime under international and domestic law was rejected by the Israeli High Court of Justice in April 2011.

[4] Data collected by OCHA over the last three years in the northern West Bank show that the yield of olive trees in the area between the Barrier and the Green Line has reduced by approximately 65 per cent in comparison with equivalent trees in areas which can be accessed all year round.

[5] ICJ, Legal Consequences of the Construction of a Wall in the Occupied Palestinian Territory, Advisory Opinion of 9 July 2004, para. 141. The full text of the ICJ opinion can be found here.