Palestinian farmers in the Gaza Strip reported that in early April 2017, Israeli airplanes sprayed their farming land located along the perimeter fence with Israel with herbicides. The scope of land and farmers aﬀected is yet to be assessed.

The Palestinian Ministry of Agriculture (MoA) in Gaza indicated that Israeli aerial spraying has been a recurrent practice since 2014, targeting areas along the perimeter fence twice yearly: in December/January and April, aﬀecting both winter and summer crops. According to the MoA, the active chemical used (Oxyﬂuorfen) kills or inhibits the germination of newly planted seeds.

The impact of this practice is reportedly signiﬁcant: the MoA estimated that the January 2017 spraying, for example, aﬀected over 2,900 dunums belonging to some 270 farmers, with an estimated loss of $1.3 million. Wheat crops, which are common in this area, accounted for nearly a third of the losses.

According to an Israeli media report in December 2015, the IDF spokesperson conﬁrmed the existence of this practice and justiﬁed it by citing the need to “enable security operations”. However, in a response to a court petition by the Israeli NGO Gisha, based on the Freedom of Information Act, the Israeli Ministry of Defence denied the practice and said (in Hebrew) that “aerial spraying is conducted on Israeli soil only, along the security fence with Gaza.”

Since September 2000, Israel has tightened restrictions on Palestinian access to land inside Gaza located near the perimeter fence with Israel (hereafter: ARA), citing the need to address a range of security threats.

While the boundaries of the ARA have ﬂuctuated over time, the Israeli authorities have refrained from oﬃcially announcing or demarcating them, thereby increasing uncertainty and risk among civilians working in or approaching the area. Palestinians living or working near the border areas consider areas within 300 metres of the fence as a “no-go” area, although some farmers cultivate land as close as 100 metres to the fence. Work or presence within several hundred metres beyond this distance and up to 1,000 metres from the fence is considered risky. A number of farmers cultivating land in the ARA are supported by international organizations, which coordinate their access to this area with the Israeli military; this has reduced the level of risk to farmers and generated additional income sources.

The access restrictions are enforced regularly by the Israeli military through the shooting of warning and, occasionally, direct ﬁre (live ammunition) at Palestinians entering the restricted areas, in addition to carrying out land leveling operations. The spraying described above is another factor discouraging a Palestinian presence along the ARA.

In the ﬁrst four months of 2017, OCHA and OHCHR documented 26 shooting incidents and 11 land leveling operations, which resulted in one Palestinian fatality and 11 injuries, representing a signiﬁcant decline from the monthly average of the same ﬁgures in 2016 and 2015. The vast majority of Palestinian deaths and injuries the ARA in recent years occurred in the context of protests and clashes with Israeli forces deployed next to the fence. 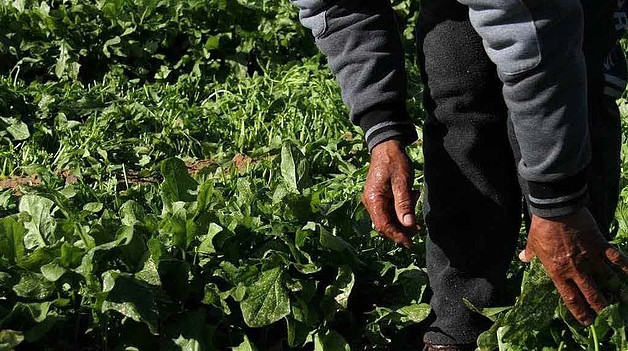 “Ahead of the 2016 winter season, I leased 150 dunums from a landowner in the Al-Qarara area, some 700 meters from the fence, and planted them with 13 types of leafy and rain-fed crops. A third of the land, 50 dunums, I planted with spinach, which is in demand in winter. Everything went well. I managed to ﬁnd a wholesaler who paid me $11,100 in advance for the produce. 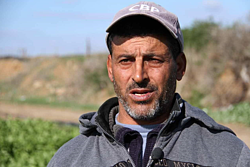 ¨In January 2017, just three days before the harvest, an Israeli airplane sprayed the crops with herbicides and all the spinach crop was destroyed. I had already used the money I received from the wholesaler to cover the cost of inputs and for paying the landlord. I estimate my losses at $43,000. I have no money to pay the wholesaler back. I replanted the land again with other seasonal crops to recover some of the big losses I experienced. Luckily, this time I covered some of the crops with nylon, in advance of the April spraying, and minimized the damage,” said Nasser.

* This article was contributed by the Food Security Sector (FSS)