Published as part of
The Monthly Humanitarian Bulletin | November 2016

Additional restrictions imposed by Israel from April 2016 on the entry of building materials into the Gaza Strip, have slowed the pace of reconstruction of homes destroyed or damaged during the 2014 conflict, and prolong the vulnerability of more than 10,000 families who are still displaced. 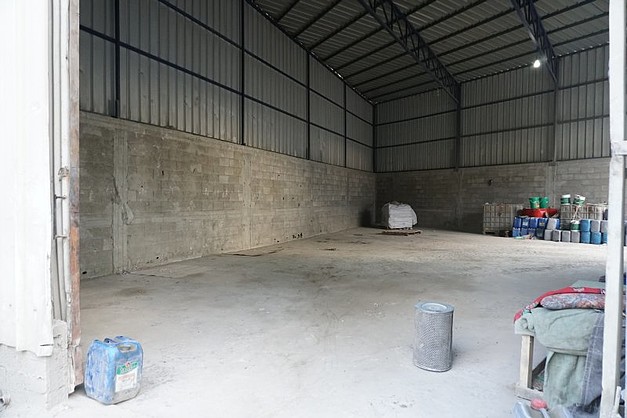 Between 3 April and 22 May 2016, Israel suspended imports of cement for the private sector following the alleged diversion of cement from the intended beneficiaries and the discovery of a tunnel from Gaza to Israel. Although imports of cement have resumed, the number of trucks entering via the Gaza Reconstruction Mechanism (GRM) has been limited to 90 per day. Prior to April 2016, the number of trucks varied, with up to 120 entering daily.[1]

There is currently a backlog demand of 577,000 tons of cement. This estimate is based only on approved beneficiaries and excludes future approved cases. Based on current stocks and the rate of cement imports (approx. 65,000 tons per month), it will take nine months to clear the backlog. If demand for additional cement continues at the same rate as in 2016, it will take more than nine years for the supply to catch up. For housing construction and repair alone, there are currently 33,000 families approved to purchase cement through the GRM, but only four per cent of the cement that they need is currently available. 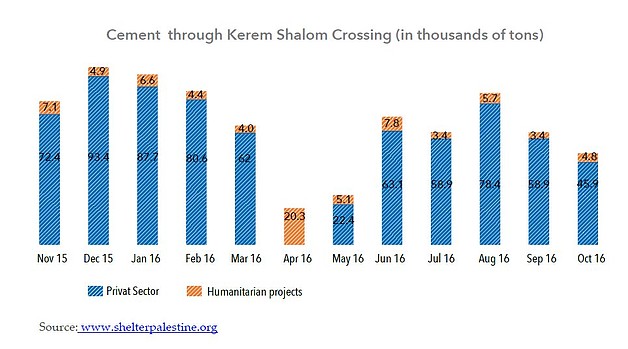 By November 2016, 39 per cent of the 17,800 housing units destroyed or severely damaged in the 2014 conflict had been rebuilt.[2] Of the 11,000 homes that were totally destroyed, only 16 per cent have been completed, another 26 per cent are under reconstruction, and 36 per cent have received no funding.[3] As a result of the slow pace of reconstruction, 10,248 families, constituting about 53,300 IDPs, remain displaced. Overcrowding, lack of privacy, exposure to weather extremes, persistent uncertainties as to their future and precariousness are some of the challenges facing these vulnerable IDPs.[4] Funding gaps threaten to end the assistance currently provided by humanitarian agencies to IDPs who live in rented properties, and who constitute the majority of IDPs. As of 7 November, approximately 6,500 eligible displaced refugee families were still waiting to receive transitional shelter cash assistance (TSCA) from UNRWA for the fourth quarter of 2016. About 300 families (1,560 IDPs) live in increasingly dilapidated caravans and endure a range of protection concerns.[5] 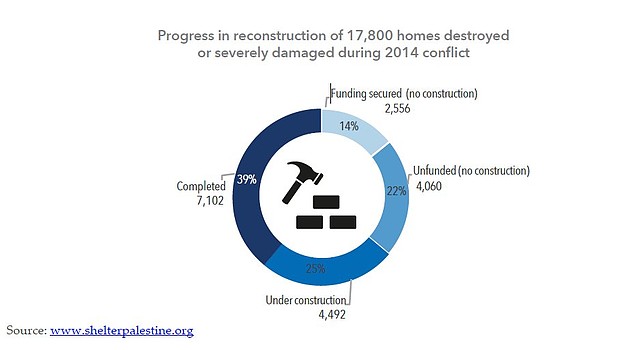 GRM and flow of ” dual-use” materials

In the blockade imposed following the Hamas takeover of Gaza in 2007, Israel placed significant restrictions on the import of goods into the Gaza Strip, citing security concerns.

Since 2010, these restrictions have mainly prohibited the entry of materials considered by Israel to have “dual” civilian-military use [6]. The list of banned items includes basic construction materials such as cement, gravel and steel bars, as well as equipment critical for the provision of basic services.

In the aftermath of the 2014 conflict, Israel and the State of Palestine, with UN facilitation, agreed to establish the Gaza Reconstruction Mechanism (GRM) as a temporary mechanism to enable the controlled entry of construction materials for reconstruction of the large-scale damage in Gaza. Since then, the Israeli authorities have removed some key materials (e.g. gravel) from the restricted list, but have added others such as wood on the grounds that they have allegedly been used for the construction of tunnels into Israel by Palestinian armed groups.

Since its establishment, the GRM has facilitated imports of 1.65 million tons of construction materials, including one million tons of cement. In comparison with the total of 250,000 tons of cement allowed in between 2010 and 2014 [7], the GRM has increased the flow eight-fold.[8] GRM allocations are organized around four types of construction activity or ‘streams’. Those designated for infrastructural and large-scale projects (project stream); for individual beneficiaries who seek to repair, reconstruct or build new homes destroyed in 2014 (shelter and residential streams); or to complete the construction of properties started before 2014 (finishing stream).[9]

* This article is based on contributions by UNSCO and the Shelter Cluster.

[1] Despite these restrictions, the volume of imports in 2016 was the largest since the imposition of the blockade in 2007.

[3] The reconstruction of completely destroyed housing units only began in June 2015, ten months after the ceasefire, due to a dispute between Israel and the Palestinian Authority over the amount of construction materials required to rebuild these units.

[6] Between 2007 and 2010, Israel prevented the entry of all supplies apart from food and medical goods, and a limited list of other essential materials.

[8] Between 2010 and 2013, the equivalent of around 5-6,000 truckloads of supplies, at least half of which comprised construction materials, entered Gaza via the tunnels every month - roughly 90,000 tons per month.

[9] In the Shelter Stream, 102,000 households have so far purchased materials to repair their homes. As a result, repair works have either been completed or are ongoing on 65% of the 153,200 homes partially damaged in 2014. In the Residential Stream, 4,400 households have so far purchased materials to rebuild destroyed homes and another 6,400 have purchased materials to build new homes. Reconstruction has either been completed or is ongoing on 40% of the 11,000 homes totally destroyed in 2014. In the Project Stream which facilitates infrastructure projects such as roads, hospitals, schools, large residential complexes, water facilities and new businesses, more than 1,100 projects have been created under the GRM, of which 57% are private sector projects. To date, 182 projects have been completed, 476 are active and another 100 have been fully confirmed.